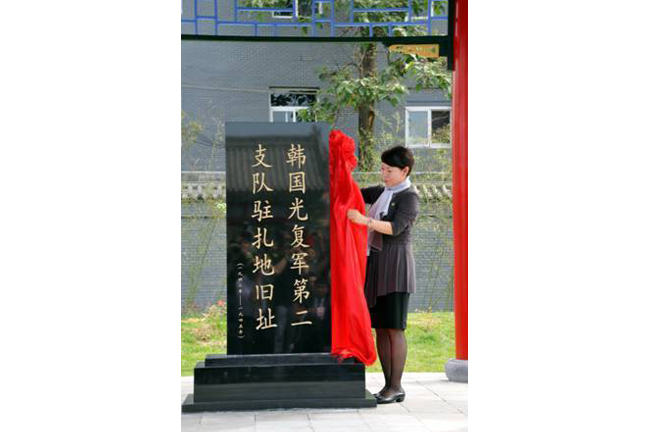 The Korean Restoration Army (KRA) was declared in Chongqing, wartime capital of the Republic of China, on December 9, 1941, two days after the Japanese attacked Pearl Harbor. The idea was to bring non-Communist Korean partisan groups active in China under one command, which would itself be under the authority of Chiang Kai-shek’s army. Never large in numbers, the KRA established a headquarters in Xi’an– in 2014, in an ironic twist of fate, the Chinese Communist government unveiled a stele in their honor, for reasons that might become clearer in week 6 of our course.

In the summer of 1945, as U.S. forces island hopped toward the main islands of Japan, a small band of officers in the Office of Strategic Services—wartime precursors of the CIA—teamed up with Korean Restoration Army men to prepare a bold, if unlikely, plan: they would infiltrate a small advance team to begin the liberation of the Korean Peninsula, and open a new front in the war against Japan. The team was awaiting orders to deploy when Japanese Emperor Hirohito’s surrender suddenly changed the calculus.

Korea would be de-occupied… but then what? No one had a plan. In a humiliating taste of what was to come, when the KRA “infiltration” group flew openly to Korea, they were not permitted to get off their helicopter by the Japanese, who even though they had surrendered would only turn themselves over to U.S. liberation forces.

Politics, like nature, abhors a vacuum. With Korea’s fate undefined, U.S.-backed politicians and partisans established a power base in the traditional southern capital city of Seoul, while Soviet backed communists flowed into the northern capital of Pyongyang. At a midnight session in Washington on the day of Hirohito’s surrender, two young officers, one of whom happened to be future Secretary of State Dean Rusk, hastily drew a line across the Korean Peninsula at the 38th parallel, proposing the Soviets stay to its north and leave the south as an American zone of influence. Meant as a stopgap measure, the line would outlive its creators in ways they never could have imagined.

With political centers in Pyongyang and Seoul and a military Maginot line betwixt them, the division between a north and south Korea started to take hold. The parallel was still porous, and left leaning intellectuals headed north to join the cause, while wealthy northerners began a southern exodus. The U.S. and U.S.S.R. were more directly involved in trying to reach a power-sharing settlement in Korea than they had been in China, but failed to achieve a consensus plan.

In 1948, the US military government moved ahead with a general election and constitution in the south. On August 15, the Republic of Korea was proclaimed by inaugural president Syngman Rhee, who had lived in the United States for most of the past 40 years and had been flown to Seoul after the war on Douglas MacArthur’s plane. A few weeks later, on September 9, Pyongyang followed suite, declaring the founding of the Democratic People’s Republic of Korea led by Kim Il Sung, who had spent the last four years of the war in the Soviet Union.

With two rival states officially proclaimed, troops amassing along the artificial border of the 38th parallel, and an ineffective negotiating process with increasingly hostile Soviets and Americans, the Peninsula edged toward civil war. Both sides expected the other to invade, and border skirmishes were frequent occurrences.

1950 got off to a strategically ambiguous start when U.S. Secretary of State Dean Acheson put up a map delineating America’s line of security commitments in Asia, and Korea fell outside of it. By then the U.S. and U.S.S.R. had agreed to remove troops from the peninsula. Meanwhile North Korean leader Kim Il Sung was confident that, once the 38th parallel was transgressed, communist sympathizers would link up with forces from the North and the south would be his. The time was ripe for a rapid reunification of the Peninsula.

Kim knew victory was impossible without Soviet backing, diplomatic and, if necessary, military. But Stalin had been focused on Europe, the ‘center of gravity’ in his strategy for global dominance, and he did not want a war with the Americans, especially not in the peripheral Asian theater. Kim’s lobbying effort to convince Stalin finally bore fruit that spring, although historians continue to debate why Stalin changed his mind and gave Kim the go-ahead. There was, in any case, one caveat—on Kim’s secret trip to Moscow in April, Stalin demanded an insurance policy in case the invasion plan proved overly optimistic. “If you should get kicked in the teeth, I shall not lift a finger,” Stalin reportedly told Kim. “You have to ask Mao for all the help (Shen and Li, After Leaning to One Side, 29).” The next month, Kim made a secret trip to Beijing to get the insurance that Stalin demanded—a promise of support from Mao.

Mao gave his blessing, and on the early morning of June 25th, North Korean troops marched across the 38th parallel. The Korean War had begun.