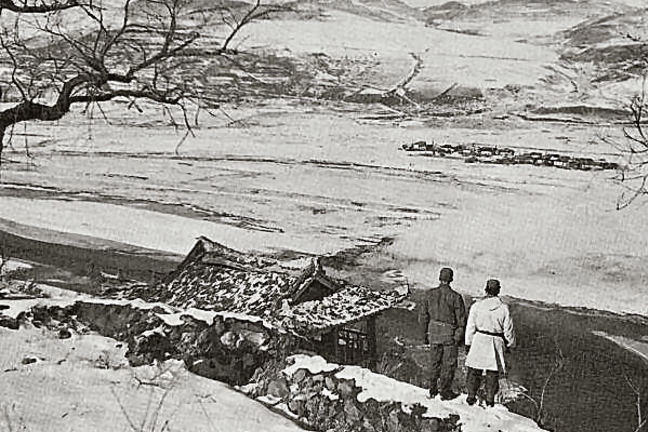 ON THE BANKS OF THE YALU, two soldiers look across the valley into the mountains of Manchuria.

Yankees on the Yalu

The spectacular success of the Incheon landing broke the KPA and sent North Korean forces on a chaotic retreat northward. Heady from initial victory, longing to dislodge the scourge of communism not only from Korea but also from China, MacArthur eagerly gave chase. But MacArthur was not alone in his hubris. One of MacArthur’s successors, General Matthew Ridgway, later explained the thinking of the Harry Truman Administration in his Vietnam War-era book The Korean War: “If the NKPA were not destroyed quickly and if it were allowed to crawl back into a sanctuary and lick its wounds, another invasion might soon follow.” (Ridgway, 16)

So Washington approved MacArthur’s request to cross the Rubicon, and pursue the North Koreans above the 38th parallel. As diplomats and politicians are wont to do, three preconditions came attached to his permit to wage war in the north: “no entry into North Korea by major Soviet or Chinese Communist Forces, no announcement of intended entry, nor a threat to counter our operations military in Korea.” (Ridgway, 45)

By this point, in late September, the PRC was well along the way of preparing to “counter” the USA militarily in Korea, although the final decision had not yet been made.

Back in May, when Kim came to Beijing in search of Mao’s approval, the Chinese leader articulated his basic principle on Chinese intervention. In the book After Leaning to One Side, leading Chinese historians of the Cold War, Shen Zhihua and Li Danhui, quote Mao to Kim: “If the imperialists intervene but do not cross the 38th Parallel, we shall not do anything about it. If they go beyond the 38th Parallel, we must cross the river to fight.” (Shen and Li, 32) That was back in the hopefulness of spring, when Kim thought he could conquer Korea mostly on his own, relying on Stalin for whatever external support was required. Kim in fact was guarded in sharing his invasion plans with Beijing, to Mao’s profound annoyance.

But as the KPA’s initial shock and awe campaign bogged down at the Busan Perimeter in August, the Chinese Communist leadership grew worried. As a contingency, by July the Border Defense Army in the northeastern provinces bordering the DPRK had been increased to over 250,000 strong. The mobilization plans were accelerated in August and September as North Korea lost momentum, Chinese assessments grew increasingly pessimistic, and the Americans appeared committed to a fight.

In line with Mao’s original “red line”, Chinese state propaganda put out regular warnings that UN forces had not authorization to fight above the 38th parallel. On September 30, Mao’s number two, Zhou Enlai, warned that China could not ignore a US imperialist invasion of Korea. But MacArthur showed no signs of letting up.

Finally on October 1st, Stalin and Kim send separate requests to Mao to send “volunteers” to help the Koreans. Mao now needed to convince his own Politburo that China should join the war. There were misgivings and doubts among his senior political and military leaders, until General Peng Dehuai arrived on October 5th and helped Mao achieve consensus in support of the war.

Having the backing of his principals, Mao wrangled with Stalin for assurance of Soviet air support. But Kim Il Sung was now desperately warning that Koreans would start pouring across the Yalu river into Chinese territory.

Mao felt he had no choice, and the date of Chinese intervention was fixed for October 19. Shen and Li quote Mao: “Now the enemy is besieging Pyongyang. In a few more days, the enemy will reach the Yalu River. No matter what enormous difficulties we have, we cannot change again the plan for the volunteers to cross the river to aid Korea.” (Shen and Li, 46)

Having lost every major war against foreign powers for over a century (going back to the first Opium War, 1839-42), the Chinese were not about to go to war with the United States, South Koreans and their UN coalition of 15 nations.