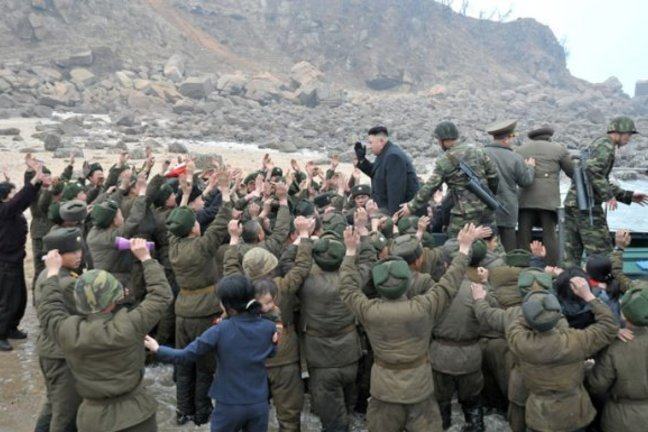 Method in the madness?

After his father worked so hard to improve ties to Beijing, Kim Jong Un’s handling of Xi Jinping would seem to be yet another example of patrimony squandered, of the hotheadedness and incompetence of youth.

When Kim Jong Il died in December 2011, all nine members of China’s ruling Politburo Standing Committee made a public condolence visit to the DPRK Embassy in Beijing. Hu Jintao, the outgoing president, made his support of the young Kim clear. Yet after Kim’s public confirmation of his role as Supreme Leader in April 2012, relations with China began to drift. Then after the CCP’s selection of a new Standing Committee, led by General Secretary Xi Jinping, in November, ties went into a tailspin.

According to most Western media coverage, it was Kim’s decision to launch another satellite rocket in December 2012 (after a failed launch in April to commemorate the centenary of his grandfather’s birth), compounded by another nuclear test in February 2013, that soured Xi on his neighbor. When Pyongyang unleashed a war of words against the US and ROK in March, and global media networks flooded Seoul to see if a real war was about to erupt, the generally unflappable Xi seemed even more perturbed. “No one should be allowed to throw a region and even the whole world into chaos for selfish gains,” Xi told an international forum in April. His foreign minister clarified by repeating the new formulation that Beijing would not tolerate anyone “causing chaos on our doorstep.”

Some observers—Americans in particular—mistook Xi’s censure for an enhanced Chinese commitment to North Korean denuclearization. But the nuclear test was a symptom of the underlying disease, in Beijing’s diagnosis anyhow. Kim’s real sin was his lack of deference to his “elder brother”. He had made no effort to secure a visit to Beijing, or to win favor with the new leader—in stark contrast to President Park in the South, whose inauguration took place less than a fortnight after Kim’s nuclear test. The satellite and nuclear tests were indeed offensive to Xi, but as expressions of the young leader’s aloofness, obstinacy and disrespect.

At the time the young leader took power, China was North Korea’s sole diplomatic ally and dominant economic partner. How could Pyongyang be so unwise as to let relations sour with its key strategic partner? Was Kim Jong Un simply inexperienced? Was it hubris? Or was it foolishness– even madness?

The impression that Kim might be mad, or at least unfilial, gained currency on the two-year anniversary of his father’s death, when the news came out that Kim had ordered the arrest, trial and execution of his aunt’s husband Jang Song-taek. Kim Jong Il had chosen his brother-in-law to play a central role in shepherding the transition of power to his son, and also let Jang take a big piece of the China portfolio. By executing his uncle, Kim seemed to be squandering his patrimony in two pivotal areas—eliminating a political protector and further damaging China ties.

Could there be a method in the madness? Read my essay in the related link, think about what you would do if you were in Kim’s shoes, and we will return to this question a few steps down the road…