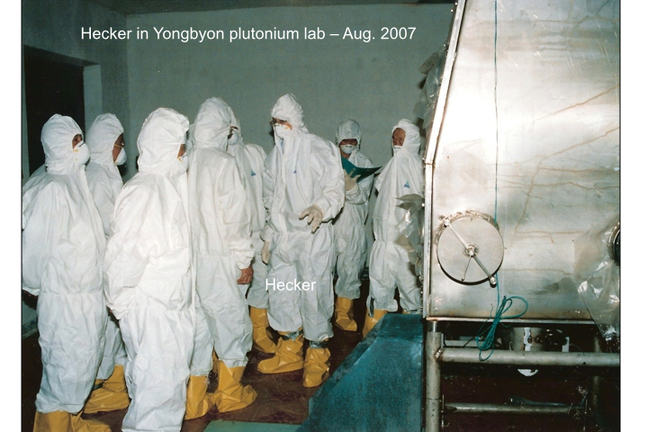 The threat posed by North Korea’s nuclear weapons program to the United States, South Korea, and Japan is obvious enough. But Beijing’s interests are also challenged, even undermined, by Pyongyang’s determined pursuit of a nuclear “treasured sword”, the ultimate means of “self-reliance.”

First of all China has basic public safety concerns about the dangers posed to its citizens in the northeast. Nuclear safety is a perilous business even in highly regulated, peaceful nuclear energy environments—as the Fukushima catastrophe reminded all of us. Imagine the safety risks inherent in an illicit and covert program operated in one of the poorest and most isolated countries in the world. And remember that North Korea’s nuclear test site is located a mere 70 kilometers from the China border, the central nuclear laboratory in Yongbyon is a only 100 kilometers, and who knows how far the presumed secret underground uranium enrichment facilities are from the Yalu and Tumen rivers.

The other set of objections are geopolitical in nature. North Korea’s bombs undermine China’s East Asian nuclear monopoly, marring the prestige of belonging to the elite nuclear club and diluting Beijing’s standing on par with faraway Moscow and Washington as the only nuclear powers in the region. North Korea provides a rationale for Japan and/or South Korea to go nuclear, the former possibility being especially inimical to China’s interests. Even if Tokyo and Seoul do not build their own bombs, the persistent North Korean nuclear threat feeds into US efforts to bolster its alliances in Northeast Asia. Although explicitly targeted at deterring Pyongyang, these joint security efforts implicitly hedge against, constrain, or threaten Beijing as well.

Finally, nuclear weapons, and multiple delivery systems, gain Pyongyang independence from everyone—including its unsteady ally, Beijing. Rather than having to rely upon China for security guarantees, with the leverage that would give to the PRC, the DPRK has its own trump card, and thus can play a stronger hand even with the Chinese.

For these reasons (and maybe you can think of others), Chinese leaders’ insistence that they really do support denuclearization of the Korean Peninsula should probably be taken at face value. The question then is how to achieve it?

China’s stated policy is crystal clear: The only way to achieve the goal of denuclearization is through dialogue and negotiation in an atmosphere of peace and stability. In 2003, after President George W. Bush reversed the engagement policy of the Clinton Administration, and Kim Jong Il staged a “nuclear breakout” by kicking out international inspectors and jumpstarting the frozen nuclear facilities, China made an uncharacteristic effort to take the diplomatic lead. Beijing essentially created the “Six Party Talks,” hosted in Beijing starting that year, in order to get the relevant parties—particularly the Bush administration—together at the negotiation table in order to work out a deal to cut off Pyongyang’s newest push. After years of starts and stops, finally the Talks began to bear fruit in 2007, and Kim Jong Il took steps to rein in the program. But new leaders in Seoul and Tokyo in 2008 brought curbed enthusiasm to the table, weakening the consensus to move forward. Then Kim suffered a stroke, leading many of incoming president Barack Obama’s advisors to mistakenly anticipate serious political instability as soon as Kim died, which seemed imminent.

By the time Pyongyang launched a satellite rocket in April 2009—which the Obama Administration took as proof of the regime’s incorrigible perfidy—appetite for the Six Party Talks was hard to find anywhere outside Beijing.

The Talks have not formally convened since December 2009. But Chinese officials continue to call for their resuscitation. Despite all the tensions of the Xi-Kim era, Beijing’s Korea policy remains quite consistent—denuclearization, peace and stability, dialogue and negotiation.

Kim Jong Un’s byungjin strategy represents a dilemma for China too, since what Beijing wants is a stable, prosperous, even strong, but denuclearizing, DPRK. China ardently wishes that North Korea would get its economic act together, and is willing to help the economy grow simultaneous to the process of denuclearization, which is quite different from Washington’s approach, which is to make prosperity the (begrudging) reward for completing denuclearization.

Many American officials think China holds the key to denuclearizing the North, if only they exerted economic pressure on Pyongyang. Most Chinese think the Americans hold the key, if only they would sit down and negotiate directly with Pyongyang. Meanwhile the North Korean nuclear dilemma only gets harder to solve as their fissile material, nuclear know-how and technology, and missile program expand.