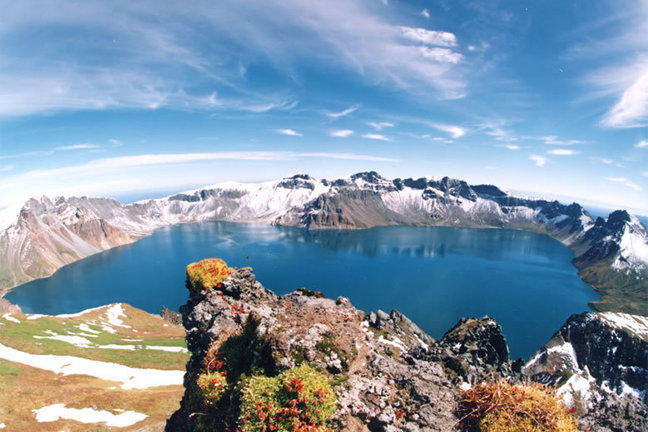 In a fascinating article published a few years back in a leading scholarly journal, Late Imperial China, historian Kim Seon-min dug through the records of negotiations between the Qing rulers and Joseon court over how to draw their 1,400 kilometer border. The line for most of the distance was self-evident on the basis on longstanding practice of using the Yalu/ Amnok river for the western portion and Tumen/ Duman river on the east. Problems arose at their headwaters in the mountain range known as Changbaishan (长白山) in Chinese.

For Koreans, the most sensitive overlapping claims had to do with who owned White Haired Mountain (Paektusan/ Baituoshan, 白頭山) and its gorgeous crater lake, Heaven’s Pond (Chongji/ Tianchi, 天池), mythical birthplace of the Korean people.

The Manchu ruling family, Aisin Goro, were similarly attached to “golmin šanyan alin”, as they called the mountain, and considered its slopes to be the origination point of their hoary ancestors [I don’t read Manchu by the way– thanks to Harvard historian Mark Elliott for help with the name!].

In 1711, the formidable Kangxi (康熙) Emperor in Beijing ordered an official demarcation of the Qing-Joseon border, which would have to delineate the grey area between the Yalu (鸭绿) and Tumen (图们). Historian Kim Seon-mi describes the arduous surveying and convoluted diplomacy that ensued from Kangxi’s desire for a clear border. The Korean court became particularly exercised over the precise location of a stone marker placed by the Chinese surveyor at a location considered by the Koreans to be south of the Tumen headwaters. After delicately confronting Kangxi’s surveyor—without complaining directly to Beijing—a Korean official discovered, to Seoul’s relief, that the stone marker was small enough to lift.

Kim concludes in her research article that the border remained ill-defined, without conjecturing whether, given the stone’s light weight the Koreans might have moved it to its “proper” place. Had they, it seems Kangxi might never have noticed. For him, the border survey and demarcation was a symbolic projection of the grandness of the Qing empire, and implicit Joseon recognition of that grandeur. Joseon meanwhile paid much closer to attention to the actual territorial split.

Kim’s article draws out the ambiguities and tensions in the Qing-Joseon relationship illustrated by the border investigation. But the implicit agreement to share Heaven’s Lake also testifies a certain stabilization and maturation of the relationship, as China moved into a period of “prosperity and flourishing” that historians call the high Qing, and Joseon Korea extended its lease on dynastic life by continuing to “serve the great” throughout the 18th century.