Discover the amazing diversity of moons in our Solar System

There are lots of moons in our Solar System. The Earth is the only planet with just a single moon. Some are bigger than ours. Many are much smaller. Some moons have ongoing volcanic eruptions. Others have rivers of liquid methane. A small handful may even be home to primitive life.

This online course will allow you to explore the rich diversity of moons in our Solar System. With experts from The Open University, you’ll explore the fundamental processes that have shaped them, and the relationship between our Moon and the Earth.

The course was produced with the kind support of Dangoor Education.

0:08Skip to 0 minutes and 8 secondsNARRATOR: This course introduces and celebrates the amazing diversity of moons in our Solar System, drawing on the unique teaching and research expertise of the Open University.

0:19Skip to 0 minutes and 19 secondsJOHAN ZARNECKI: Every time I see Titan, I find it incredible to think that something we designed and built is sitting there on the surface. It's there now. It will always be there.

0:30Skip to 0 minutes and 30 secondsNARRATOR: With specially filmed contributions from moon experts from around the world.

0:35Skip to 0 minutes and 35 secondsCHRISTIEN SHUPLA: When you get to the gas giants - the large, bloated planets that go around our Sun - they have immense amounts of gravity, and their wide orbits have enabled them to pick up many moons. Some of them probably formed in orbit around the planets. Others are captured asteroids and comets.

0:52Skip to 0 minutes and 52 secondsMICHELE DOUGHERTY: This is the image that we took when went really close to Enceladus, and you can clearly see this large plume of water vapour coming off from the south pole. There are ice crystals, and there are organic compounds, the basic building blocks of life.

1:06Skip to 1 minute and 6 secondsNARRATOR: Having examined a variety of very different moons, their origin, and their past and present activity, the course goes on to investigate the different ways that scientists study moons from highly sophisticated technology used on space probes to the incredible Apollo missions that sent 12 human beings to explore our own Moon.

1:28Skip to 1 minute and 28 secondsSARAH NOBLE: I always remember coming home one night, I had been working late in the lab dealing with lunar samples, and I looked down and saw that my hands were sparkling in the moon light, and I realized that it was moon dust on my hands. And I looked up, and I thought, this dirt came from there.

1:44Skip to 1 minute and 44 secondsNARRATOR: Accessible even if you're new to the subject, the course includes special, interactive elements allowing you to study Moon rocks using a virtual microscope and even to challenge the computer to a game of Moon Trumps. Towards the end of the eight weeks, the course asks some of the big questions about the likelihood of any moons hosting habitable environments as well as exploring the remarkable discovery of water on our own Moon.

2:14Skip to 2 minutes and 14 secondsPAUL SPUDIS: Finding water, it not only enables human life to have a foothold in space, it also permits you to create a space transportation system that's reusable and extensible.

2:23Skip to 2 minutes and 23 secondsNARRATOR: Finishing the course, will leave you with insights into the often dramatic processes that shape the moons of our Solar System and the ingenious ways that scientists can study them.

An interest in learning about the moons of our Solar System and the methods used to understand them. Prior knowledge of astronomy is not expected. 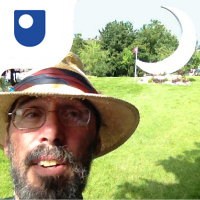 You can use the hashtag #FLMoons to talk about this course on social media.