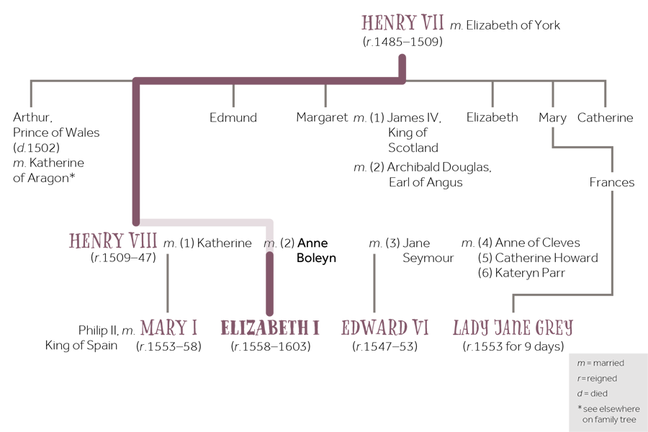 Family tree of Elizabeth I

We ended Week 1 with an animated summary of how Elizabeth came to be Queen. This week we’ll be looking more closely at imprisonment at the Tower, expansion, and how dining changed during her rule.

In this step we’ve provided a Tudor family tree, and for those of you who aren’t familiar with the story of Elizabeth’s succession, we’ve also included a brief summary of the events that led up to this momentous occasion.

For those of you already familiar with this story you may like to skip straight to the next Step but don’t forget to mark this one as complete before you move on!

Jane Grey was nominated as heir by her cousin, Edward VI, but she ruled for just nine days before both popular and political support turned to her cousin Mary. Jane found herself imprisoned in the Tower, where she was eventually executed. On 1 October 1553, at Westminster, Mary was crowned as the first true queen of England. However, Mary’s reign only lasted five years, and she was faced with many challenges along the way – one her most consistent problems being her younger half-sister. Elizabeth was the ‘poster girl’ for those who were against the Queen’s marriage to Philip II of Spain, and Mary’s decision to re-establish Catholicism in England.

It had been in Elizabeth’s name that Thomas Wyatt, a leading figure in a rebellion to overthrow Mary, claimed his actions. There was also the small matter of her part in the plot. Elizabeth was suspected (probably with good reason) of having corresponded with the French ambassador and possibly being involved in other treasonous communications, but no evidence of this could be extracted from Wyatt or the other rebels, after capture, even under torture.

Mary needed to control her younger sister and Elizabeth spent much of Mary’s reign under house-arrest, including at the iconic Tower of London. On 18 March, Elizabeth boarded a barge which took her from Whitechapel, down the Thames, to her dreaded destination, but not before writing to her sister praying that Mary would not let ‘evil persuasions’ set one sister against the other. However, within hours, Elizabeth was imprisoned, in the very same room her mother, Anne Boleyn had been placed before her trial and execution.

Elizabeth did not stay long at the Tower of London, and on 19 May of the same year, she was moved to Woodstock in Oxfordshire. Whilst at Woodstock, Mary married Philip II of Spain, and a child was confidently expected. However circumstances were rapidly changing. Mary’s pregnancy was false and Philip II, who had now effectively deserted her, began to recognise Elizabeth as heir to the throne. Phillip even tried to coerce Elizabeth into a marriage with his cousin, but she refused to be pressured. Just one example of the strong-will and determination which Elizabeth is remembered for today.

Mary’s health was rapidly deteriorating and on 6 November 1558, she acknowledged Elizabeth as her heir. Mary died just eleven days later.

At the age of 25 on the 15 January 1559, Elizabeth returned to the Tower of London under very different circumstances to her journey four years earlier. Having spent a comfortable night at the Tower in preparation, she left the fortress the next morning to ride through cheering crowds in the City of London to Westminster Abbey, where she was crowned and anointed as Queen of England.

If you would like to read more about Lady Jane Grey, previous learners shared these links which you might find of interest:

Debunking the myth of Lady Jane Grey on 1843 magazine website.