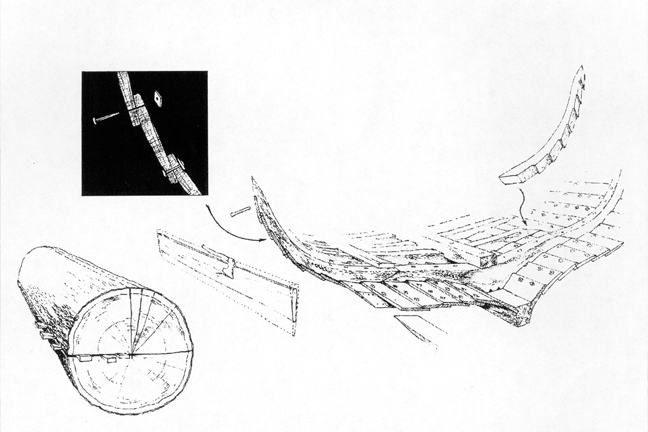 An example of clinker construction, drawn by Jon Adams.

A new technology: from clinker to carvel

What were these changes in ship technology? They arose out of the differences between the shipbuilding traditions of northern Europe and the Mediterranean. Medieval ships from London, Bruges or Riga would have shared certain technological characteristics and would have looked similar at a distance. On the other hand they were very different in design, construction and appearance from their counterparts from Pisa, Venice or Alexandria.

These differences were the result of thousands of years of development in which the people of these two regions devised their distinctive ways of building ships constrained by various social, material and environmental factors. 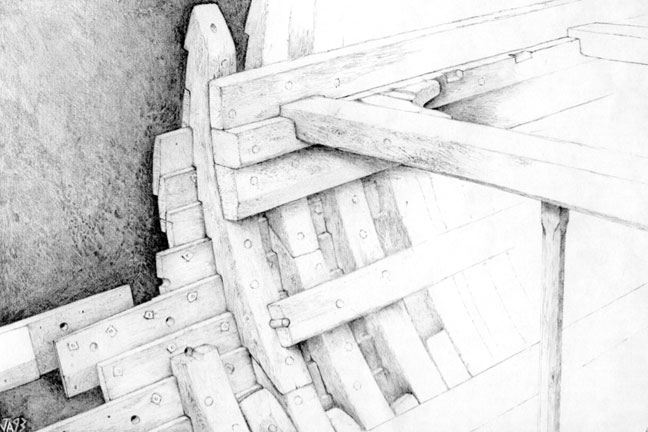 An example of clinker construction drawn by Jon Adams. © University of Southampton, 2016.

In the north there were two dominant ways of building ships but both shared an important and recognisable characteristic: their hulls were either partly or entirely built with overlapping planks into which frame timbers were fitted to enhance hull stiffness. The greater and longest-lived tradition of building ships this way originated in Scandinavia and is known as ‘clinker’, from the words clinch or clench, because the nails that fastened the planks together were ‘clenched’ over a rove or washer (see image above).

In the Mediterranean a different method had been devised in which it was the frames that were shaped first, the planks being attached to them in a smooth edge to edge layer (see image below). It is because the frames of Mediterranean-built ships made a more or less coherent structure in their own right that this method is sometimes known as ‘skeleton construction’.

As well as their hulls, the sails that propelled these ships (the rig) were also different. In the north seagoing ships of the medieval period were propelled by a single large square sail but Mediterranean ships favoured triangular ‘lateen’ sails set fore and aft on one or more masts depending on the size of the ship. Another important difference was that Mediterranean ships had side rudders while those of the north had more efficient stern rudders that were less easily damaged or lost. 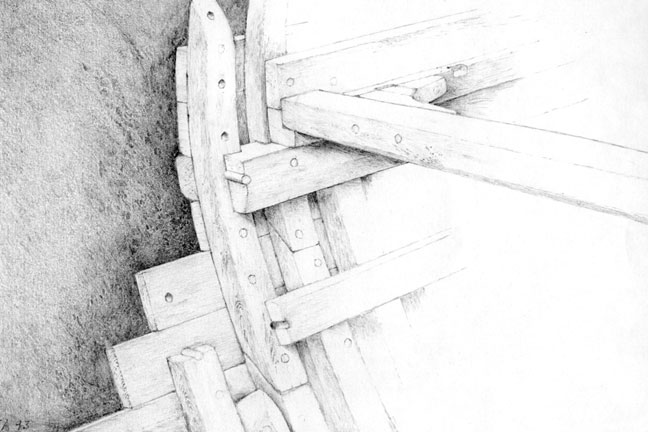 An example of carvel construction drawn by Jon Adams. © University of Southampton, 2016.

In the 1300s an increase in economic activity not only saw a rapid increase in the numbers of ships trading up and down the Atlantic seaboard but also in the numbers of ships from northern waters entering the Mediterranean. This led to fascinating processes of technological exchange in which Italian shipwrights in places such as Pisa and Genoa began to build ships that combined the best features of north and south. Using their frame-based construction they adapted the hull form to carry a centreline, stern rudder. They also set a northern style square sail on a central main mast but retained a lateen sail on a smaller mast towards the stern – the mesan or mizzen mast. Before long a third mast – the foremast – was added and this provided an even better balanced rig, greater manoeuvrability and in some situations more speed. It was this rig that we still call the classic ‘ship rig’.

In their turn, these ships traded north where their qualities were quickly appreciated by merchants and navies alike. The larger ships built in this manner were called ‘carrack’ by the northerners and the smaller ones were ‘carvels’ a term probably derived from the Portuguese ship type ‘caravella’. The word carvel or its equivalent quickly spread throughout 15th century northern Europe and came to refer to any ship built in this frame-led manner irrespective of size. The reason for its appearance in every northern European language at this time is because it was quickly recognised that these ships answered many needs of an increasingly maritime and global world.

Carvel construction was robust and could incorporate timber of lesser quality than the traditional clinker. It was not only better suited to the building of large ships but carvels were also more suitable for the ways in which ships were now to be used: Long-distance voyaging for transatlantic fishing and whaling, ocean-going trade in ships that were fast, manoeuvrable and defensible and of course for naval warfare.

In this last role we see the carvel ship quickly developed into a platform for guns of increasing size as the early nation states vied for power and control. This in essence is what we see in Henry VIII’s Mary Rose, The Scottish Great Michael, the Swedish Mars, and a host of other great ships of the period, capable of exerting terrifying power through the muzzles of their guns but also of projecting the dynastic power, status and prestige of their renaissance rulers.