This content is taken from the University of Southampton's online course, Shipwrecks and Submerged Worlds: Maritime Archaeology. Join the course to learn more.
View course
3.8 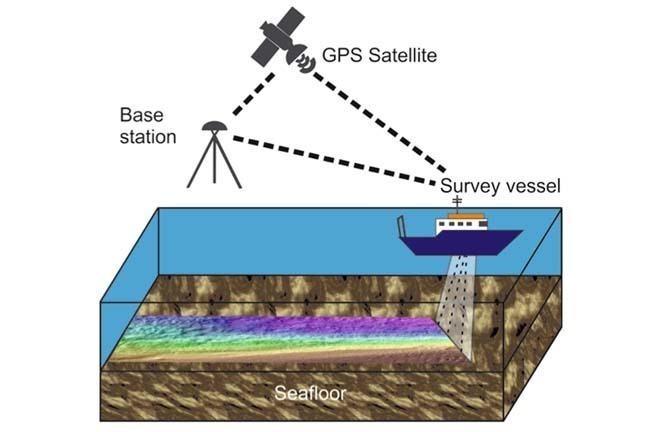 Marine geophysical survey in archaeology developed by borrowing techniques used in military applications (in particular the hunt for mines and submarines), geological prospection (the search for oil, gas and mineral resources), offshore construction (most recently for offshore windfarms), deep-ocean exploration and seafloor mapping.

Traditionally, the use of such techniques on marine archaeological sites was a rarity and frequently only occurred through chance or the support of open minded individuals. Over the last fifteen years, however, these techniques have both significantly reduced in cost (making them accessible to both professional and amateur marine archaeologists) and are used as standard in the archaeological consents process for offshore construction and extraction.

The use of this equipment generates results that are of high spatial resolution, repeatable and quantifiable, and that can be easily integrated with other scientific data. Although traditionally seen as a prospection tool for new sites, marine geophysical techniques are now also conventionally used to map in detail both exposed and buried sites prior to deploying divers, and repeat surveys as an essential component in underwater heritage management. They are used as much on discrete sites, such as shipwrecks, as they are on large tracts of seabed in order to reconstruct ancient submerged landscapes. These larger scale landscape reconstructions are ideally combined with actual in situ geoarchaeological data either from cores or diver excavation. Furthermore, they are acquired in such a way that they can be easily combined with conventional terrestrial data acquired from any adjacent shore. Ultimately, these “seamless landscapes” provide essential context for the actual artefact based archaeology they may contain.

Why do we need to use geophysical tools on marine archaeological sites?

Mapping archaeological features and artefacts is crucial for the understanding of archaeological deposits, in the management of sites and sometimes, to assist in planning strategies for site excavation. Archaeologists are capable of rapidly mapping terrestrial archaeological sites both at landscape scale (using a combination of techniques such as aerial photography, lidar [Light Detection and Ranging] and satellite imagery) and site scale (using a range of geophysical surveying techniques: magnetometry, resistivity, GPR [ground penetrating radar] and latterly laser scanning) prior to the actual process of detailed excavation and recording.

By virtue of the more challenging environments encountered on the majority of submerged archaeological sites (low visibility, strong currents and waters that present a pollution risk) the role of pre-excavation survey is even more important. Marine geophysical techniques (side scan sonar, swath bathymetry, sub-bottom profiling and magnetometry) therefore play an important role in the identification and detailed mapping of sites both exposed on the seabed and buried in the near surface sediments. These approaches are rapid in terms of acquisition (hours-days) and increasingly provide almost instantaneous imagery of any sites, although post-processing is often required to optimise the information that can be gained from either the individual techniques or more often combining multiple different datasets. Dive teams are still obviously essential to the process of marine archaeological excavation, being essential to the detailed recording of sites, and where appropriate the excavation and retrieval of material.

How do marine geophysical tools work?

The main tools used for geophysical surveys of underwater archaeological sites (either shipwrecks or ancient landscapes) use sound to either image the seabed or the near surface sediments. For investigating sites exposed on the seabed, the most common techniques are side scan sonar (an underwater equivalent of aerial photography) and single beam or multi-beam (also known as swath) bathymetry (equivalent to terrestrial lidar data), whilst wholly or partially buried sites use a range of devices such as “pingers”, “chirps” and “boomers” [all named after the nature of the sound they make rather than a complex acronym] to image them.

By accurately recording the time it takes for a sound emitted from a transponder to hit the seafloor or a buried reflector (e.g. ship’s timbers) and then return to the receiver, and with the knowledge of the speed of sound through the water column, archaeologists can calculate the actual distance to the seafloor and thus can map the terrain of the seafloor (see image 1). Repeating this over a large area creates a detailed map of any underwater terrains and obstacles, such as shipwrecks or fish traps. The strength of the return echoes (backscatter) can also be used to establish the texture and type of seabed (gravel, sand, rock, etc.) and is useful in identifying manmade structures (see image 2). The only exception to these sound based techniques are magnetometers, which record local deviations in the earth’s magnetic field in response to the presence of large iron objects such as a large vessel or even a small metal object. 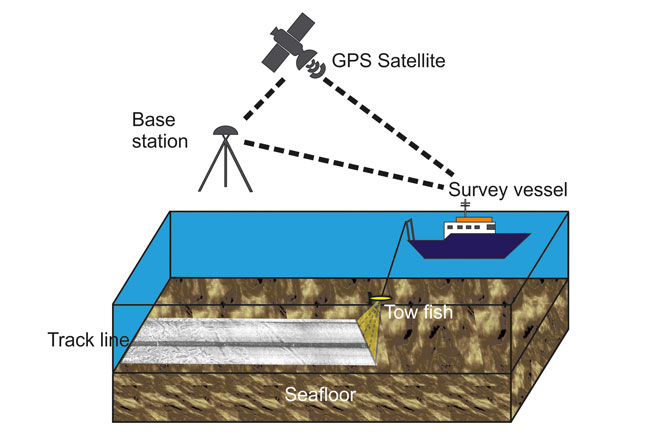 All geophysical tools require the user to have an accurate position of the instrument at all times. To provide centimetric accuracy, differential global positioning systems (DGPS) are often employed, which use both standard GPS (the same as used by vehicle satnavs and in mobile phones) and a land-base, for which the precise location is known.