Discover the traumatic effects of war on those who survive it, from the soldiers on the front lines to the civilians at home.

2014 marks the centennial year of the beginning of World War 1. The war began in the Balkans, but it soon spread to become a European conflict, and developed into a world war.

It was a war of unprecedented scale and brutality, with countless casualties. It also left a poisonous legacy for the 20th century and beyond, and many of the issues that were left unresolved in 1918 would lead to another world war in 1939. 1914-1918 was a period in history that has proved provocative and culturally resonant for the last hundred years.

On this free online course, you will study the subject of physical and mental trauma, its treatments and its representation. You will focus not only on the trauma experienced by combatants but also the effects of World War 1 on civilian populations.

Over three weeks, you will discover just how devastating the effects of World War 1 were in terms of casualties across the many combatant nations, and look in depth at the problem of “shell shock” and how deeply it affected the lives of those who lived through it. You will also develop the skills to carry out your own independent research.

The war was not only experienced on the battlefield, however, and you’ll explore the many and varied ways in which civilians’ lives were affected by it. For example, in the way combatant casualties affected the lives of loved ones who were left behind.

Finally, you will look at how the trauma of World War 1 has been depicted in art and literature, and see what has been learned from the past in the modern day treatment of combat stress reactions and post-traumatic stress disorder (PTSD).

For a taste of what will be covered in this course, read a post from lead educator, Annika Mombauer, on our blog: “Remembrance Sunday: how World War 1 changed the way we mourn the dead.”

This course is part of a series designed in partnership with the BBC to commemorate the war. Using archive material, you will see how representations of trauma have changed over the years.

The other courses in this series are:

0:08Skip to 0 minutes and 8 secondsI was going up with the Russians one night. And I saw the limbers against the skyline and the flares going up, what you see every night, only I seem to be seeing it from the future. A hundred years from now, they'll still be ploughing up skulls. And I seem to be in that time and looking back. I think I saw our ghosts.

0:37Skip to 0 minutes and 37 seconds2014 marks the centenary of the beginning of the First World War. It was a war of unprecedented scale and brutality with countless casualties. We're used to thinking about the men who died in the trenches. What we think less about is the impact of the conflict on those who survived. I'm Dr. Annika Mombauer from The Open University, and I have a particular interest in the history of the First World War. In this course, you'll study the significance of mental and physical trauma in World War I. We'll ask what it was like to live with the loss of a limb or suffer a disfiguring injury.

1:19Skip to 1 minute and 19 secondsYou'll look at shell shock and see how deeply it affected the lives of those who lived through it. No doubt they'll soon get well, the shock and strain having caused their stammering, disconnected talk. Of course, they're longing to go out again, these boys with old scarred faces learning to walk. They'll soon forget their haunted nights, their cowed subjection to the ghosts of friends who died. In this course, you'll see how the First World War was a turning point in our understanding of the effects of war on mental health. You'll see how attitudes to trauma have developed in the 20th Century and how psychological casualties have been treated in more recent conflicts right up to the present day.

2:19Skip to 2 minutes and 19 secondsAnd you'll turn your attention to the different ways in which shell shock and trauma have been represented in literature and art. You'll also question some of the facts and figures often quoted about the First World War. And you'll have a chance to discuss your reactions to what you see with your fellow students.

2:37Skip to 2 minutes and 37 secondsJoin me for World War I: Trauma and Memory.

This course is aimed at anyone with an interest in World War 1. Some prior knowledge of the history involved may be helpful in understanding the context of some elements of the course, but is not necessary. 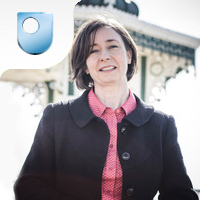 Lead Educator: World War One: Trauma and Memory.
Professor in History at the Open University, UK.

You can use the hashtag #FLTrauma15 to talk about this course on social media.