The Age of Sail and European Empire 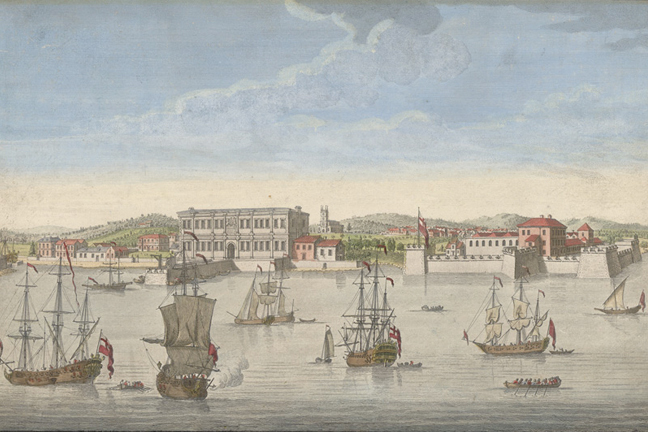 From the 16th century, European seafarers began to sail further west and then east. Driven by the hope of commercial gain, by national interest and religious belief, these explorers discovered ‘new’ maritime routes and worlds. These early ‘Voyages of Discovery’ were enabled by the new shipbuilding technologies of the late Medieval period and led to large-scale transoceanic trade and a newly-global movement of people, materials and ideas. They also laid the foundations of vast European empires that lasted into the 20th century and had profound effects in shaping the world we inhabit today.The history of European empires is a maritime one – one powered for hundreds of years by ships and sailors and by wind and sail. This ‘Age of Sail’ (c.1600-1850) was a period of significant and rapid change in the scale, technologies, social world, politics and public importance of seafaring. It was also the period when many of the political and legal institutions, scientific ideas, economic structures, and even geographic boundaries of the modern world developed.There are hundreds of stories we could draw out from this period, but within this activity we will be looking specifically at Britain’s expanding maritime world in the Age of Sail. The rest of the articles in ‘The Age of Sail and Global Seafaring’ provide examples from Britain’s maritime empire to draw out important stories, archaeological finds and developments in seafaring. But first, here is a short overview of this important period.The new ‘Atlantic World’The period between about 1600 and 1850 saw the development of the collection of overseas colonies, trading posts and military strongholds that came to be known as the British empire. English colonial interests were first focused across the Atlantic, on the colonies in the Caribbean and eastern seaboard of North America. By the eighteenth century, in common with a number of European countries, Britain drew significant wealth from the sugar plantations of her Atlantic colonies. These were worked by enslaved people trafficked across the Atlantic in European ships, via the slave trade. Goods, people and ideas all travelled along sea routes protected by the Royal Navy (from pirates as well as other European vessels), contributing to the economic and cultural interchanges that defined this British Atlantic world.The Smithsonian has a very good online exhibition on the Atlantic World.

View Course
The Indian Ocean, the Pacific and Britain’s Empire in the EastFrom the early seventeenth century the East India Company, a speculative merchant joint-stock company, had traded valuable goods like porcelain, silk, indigo dye, salt and tea from Asia to the British Isles. The Company initially established coastal trading posts in India through negotiation with local rulers. ‘India ships’ sailed annually from the British Isles utilising the Indian Ocean’s monsoon winds to reach the often-precarious outposts. In the eighteenth century, as they grew and became increasingly embroiled in conflicts with local rulers and competing European powers, the British involvement in India came to be shaped as much by the control of territory as by trade.In the late eighteenth century, while the British expanded their control over India, the American War of Independence led to the loss of Britain’s North American colonies and parliament discussed abolition of the slave trade. The geographic focus (as well as the ‘purpose’) of Empire began to shift. And as the eighteenth progressed into the nineteenth century, Britain expanded her interests in the East in new ways. James Cook made voyages of ‘scientific discovery’ to the Pacific to pursue astronomical measurements in Tahiti, but also to further explore the Ocean. Following his ‘discovery’ of Australia, the ‘First Fleet’ was dispatched to establish a penal colony, which led in turn to settler colonialism in Australia and latterly New Zealand.Three Ocean WorldsIt is important to recognise that the ocean worlds of the Atlantic, Indian Ocean and Pacific that Europeans entered over this period were very different. The geographies, weather systems, ocean currents and, most importantly, histories of each ‘ocean world’ were unique. Though there was indigenous seafaring along and around the coasts and islands of the Atlantic, for example, there was no large transoceanic seafaring tradition. In contrast, when Europeans first sailed around the Cape into the Indian Ocean they entered a complex, maritime world with a long history and established transoceanic trade routes, communities and technologies. Whilst in the Pacific, Cook encountered an ocean world with a very different history of transoceanic voyaging and navigation. The mechanisms and impacts of European exploration, trade and colonisation were, therefore, particular to each ocean world.Maritime Archaeological WorldsFinally, it is also important to remember the larger historical narratives of Britain’s maritime empire often focus on the lives of rich, European men. Maritime archaeology can certainly provide important insights into the ‘big’ events and stories (both the celebrated and the infamous) of Britain’s Imperial past. But it can also offer us glimpses into the everyday lives of sailors, migrants, convicts, indentured labourers and even slaves. Shipwrecks and port archaeology present a window onto a world in motion – where all types of people and their possessions, goods and raw materials, and even ideas were on the move. That means that if we explore this archaeology carefully, and ask the right research questions, we have the chance to better understand the lives of all types of people from all over the Empire, and thereby better understand our own world.DownloadsThe interactive timeline will be very useful during this activity and you can also download a smaller ‘Britain and the Sea 1650-1850 timeline’ from the bottom of this page.Jesse Ransley
© University of Southampton, 2017

Hi there! We hope you're enjoying our article: The Age of Sail and European Empire
This article is part of our course: Shipwrecks and Submerged Worlds: Maritime Archaeology