This content is taken from the University of Southampton's online course, Agincourt 1415: Myth and Reality. Join the course to learn more.
View course
1.9 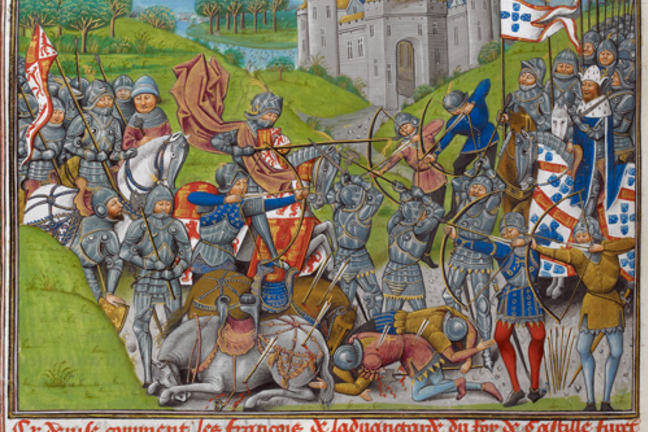 In this article, Dan analyses the composition of a medieval army.

By the early fifteenth century armies contained two main types of soldier in military terms - men-at-arms and archers. The former incorporated men of varied social statuses from royal dukes to lesser landowners. These men comprised the warrior elite of Medieval England, trained from an early age in the use of weapons and horsemanship, even though in battle situations from the middle of the fourteenth century onwards, they mostly fought on foot. The foot joust had developed as a form of training.

By contrast, the archers were of a lower social status, typically being members of the upper ranks of the peasantry as well as servants of noble and gentry households. Other individuals recruited for the expedition included miners, gunners, masons, carpenters, smiths and carters who were necessary for the operation of the royal artillery and other equipment.

Wages were determined by social status. It was for this reason that peers, knights and men-at-arms were paid different rates of pay based on their rank. Members of the nobility were given large sums for military service: a duke received 13s 4d per day, an earl 6s 8d, a baron 4s. The knights also received substantial rates of pay, with high ranking knights, known as knight bannerets, in receipt of 4s a day, whereas the knight bachelor was paid 2s. Ordinary men-at-arms were paid half as much per day as the knights, receiving 1s (or 12d). This was none the less a high daily wage, equivalent over a year to the income of a small landed estate. It is hardly surprising that such men gained social status through military service: the term ‘esquire’ was synonymous in 1415 with ‘man-at-arms’.

All of the men-at-arms in a retinue were also entitled to a share of a bonus paid to the leader of retinue known as the ‘regard’. The rate for this was 100 marks (£66 13s 4d) for every 30 men-at-arms for every three month period in service. The regard was intended as a way of subsidising the substantial costs involved in the purchase of armour, horses and other equipment for military service. Men-at-arms would also have been accompanied by a number of servants and pages who would assist them on campaign.

Archers formed the bulk of the soldiers recruited for the 1415 expedition to France. A ratio of one man-at-arms for every three archers was regarded as optimum. This was a marked increase in the proportion of archers in comparison with the late fourteenth century when the English tended to have a ratio of 1:1, and reveals not only confidence in archers but also their cheapness. They were paid 6d per day, half the wage of a man-at-arms. Increasing the proportion of archers enabled Henry to raise a larger army. All men had to practise with the bow on Sundays, so there was a large pool to draw on. The archers in the muster rolls were commonly described as ‘yeomen’ (valetti in Latin and valets in French), indicating that they had social status by virtue of their military service. By 1415 most archers recruited for overseas expeditions were expected to be mounted whilst on campaign although, like the men-at-arms, they dismounted to fight in battle. Evidence suggests that archers would typically have one horse, men-at-arms more, and the nobility took large numbers of mounts with them.

The 1415 expedition to France was notable for the provision made to procure gunpowder artillery, testimony to Henry’s intention to wage a campaign of conquest via sieges. Expertise in England was limited and therefore large numbers of gunners from overseas, mainly from the Low Countries, were recruited. These individuals were responsible for the construction, maintenance and repair of guns, as well as creating gunpowder from its component parts of saltpetre (potassium nitrate), sulphur and charcoal. Other artificers were also hired in 1415, including 100 masons, 120 carpenters, forty smiths and sixty carters. These craftsmen also contributed to the artillery, by carving gunstones for ammunition, creating wooden structures known as mantlets to protect the guns, carrying out repairs and moving the equipment. The intention to carry out sieges is also evidenced in the recruitment of a company of miners from the Forest of Dean.

After reading this article, what are your thoughts and impressions?