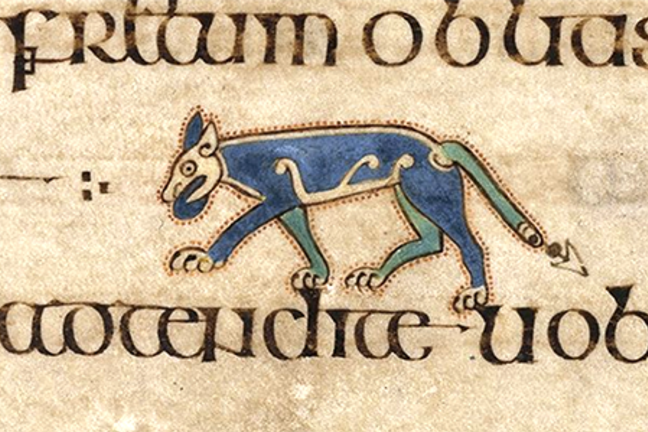 ‘Authors like cats because they are such quiet, lovable, wise creatures, and cats like authors for the same reasons.’ (Robertson Davies)

The lively antics of cats, prowling, hunting and quietly sitting among the lines of the Book of Kells hold no very obvious religious symbolism. On fol. 48r a cat is shown in pursuit of a rat who is making off with what appears to be the Eucharistic bread.

Fig 1. Fol. 48r depicts the cat catching the rat. © The Board of Trinity College, University of Dublin.

In popular Irish lore, cats had been created by God to restrict the mouse population on Noah’s ark, and in so doing protect the food required to sustain its passengers. In the Book of Kells these are perhaps ‘visual’ marginalia – a reflection of the everyday realities faced in the scribal environment, and the role of cats within it.

This is certainly the case in a later, early fifteenth-century Irish manuscript, the Leabhar Breac (Dublin, RIA MS 23 P 16), where in a marginal note the scribe laments that his cat has gone astray.

At the time that the Book of Kells was made domestic cats were a high-status possession, owned principally by the elite. Such was their value, that there was an entire set of laws, the Catslechtae (‘cat-sections’) outlining the fines attached to the stealing, injuring or killing a person’s cat. Penalties differed according to the talents of the cat in question. For example, a cat was worth three cows if able to purr and keep its owner’s house, grain store and kiln free of mice, but only half that if was just good at purring.

Laws even refer to names including Méone (‘little meow’) and Cruibne (‘little paws’).

Without doubt however, the most famous medieval cat was Pangur Bán. He was the ninth-century protagonist of a poem penned by an Irish scribe otherwise engaged in transcribing Latin hymns and grammatical texts preserved in a manuscript now at St. Paul’s Abbey in the Lavanttal, Austria (Riechenauer Schulheft, fol. 1v). The poem is written in the vernacular Old Irish. The translation below is by Robin Flower.

Thinking about this article: