In this final part of the Jazz Piano series, you’ll combine everything you’ve learned up to now, whilst adding some cool new skills to your musical repertoire.

You’ll end triumphantly with two programmed concerts, a solo concert and a concert from My Piano Trio.

0:05Skip to 0 minutes and 5 secondsHi, welcome to Part IV of my course Learn Jazz Piano. This part’s called ”Final Topics & 2 Programmed Concerts”. In this part we going to meet another 20 tunes, bringing our total to something like 50, most of which are jam session vehicles. In the two final concerts, I’m going to also play for you and give the music for an additional 20 (25) tunes bringing the total to 75. The topics that we’re going to cover - we’re going to have a look at 4 advanced blues sequences and the conventions involved in playing ballads - slow tunes.

0:40Skip to 0 minutes and 40 secondsThen we’re going to have a look at Latin jazz, on the one hand Afro-Cuban influences, and on the other hand Brazilian influences and bossa noves.Then the related area of 8/8 or even quavers. Then we’re going to have a look at other influences that affected jazz - “crossover” as it’s sometimes called - so Jazz Funk, Third Steam, Indo-Jazz, Free Jazz and Improvised Music. Then we’re going to look at our fourth route to improvisation, which I call “special devices”. That’s going to be followed by how you support the soloist, how you play behind the soloist - or “comping” as it’s called.

1:22Skip to 1 minute and 22 secondsThen the final teaching sesion is called “Putting It Together” and we look at a whole welter of topics that are related to being a jazz musician. In particular - pianistic influences, non-pianistic influences, musical resources generally, playalongs in particular, how to practice, how to learn standards by heart, transcription, composition, group formation, recording, gig getting - a welter of topics. Then we move to the final 2 concerts. First of all, we have a look at issues involved in putting together a concert. That’s followed by a 40 minute solo concert in which I play 10 tunes - 3 standards - oh 7 standards and 3 originals.

2:06Skip to 2 minutes and 6 secondsThen a 90 minute concert by my trio of Ben Taylor on bass and Lee Miller on drums, when we play 16 tunes - 6 originals and 10 standards. Then there are some optional sections in this part of the course - one on a quick tour of this recording studio, another one on my keyboard setup, another one tracking some of my personal involvement in jazz and a very final one where we have a brief meet up with Ben and Lee. So we’ll finish this with a few excerpts from sections later on in the course.

This course would suit any interested pianist, but may be of particular interest to university or college piano students studying music. 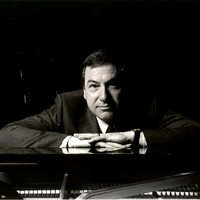 I have been a jazz pianist and educator for over fifty years and have developed this online course on learning jazz piano.

Part of the University of London, Goldsmiths has a world-class reputation. Study creative and inspiring courses and learn from leading minds in the arts, humanities, social sciences and computing.

You can use the hashtag #Jazzpiano to talk about this course on social media.