In this step, you will learn how CONSTRUCT queries return new RDF graphs.

When building an application like the music portal, you might need to retrieve some information from a queried dataset and re-express it in new RDF triples, perhaps using new names for resources. This might, for example, allow more efficient integration with triples from another dataset.

To meet this need, SPARQL provides a CONSTRUCT query which uses information retrieved from a dataset in order to build new RDF statements.

Note that the query does not update the dataset. The new RDF triples are returned to the user as output, to be used in any way desired, the dataset itself remaining unchanged. (In SPARQL 1.1 there are query types for updating a dataset, as described in a later section of this chapter.) 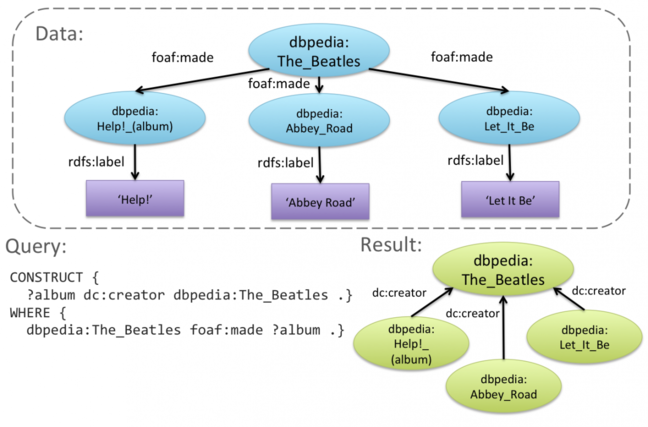 To show the basic syntax of a CONSTRUCT query, consider the following example where the user wishes to assert “creator” relationships between artists and their products – of any kind; perhaps the aim is to construct a dataset in which this predicate is used consistently, replacing more specific predicates in MusicBrainz.

For each variable binding, it then instantiates the triple patterns in the CONSTRUCT list and so creates (in this case two) new RDF triples. The result of the query is a merged graph including all the created triples.

The figure above shows this outcome diagrammatically for an even simpler CONSTRUCT query, with the relevant part of the dataset and the constructed triples both shown as graphs.

In the next step, you will be able to practice organising the results of CONSTRUCT queries.