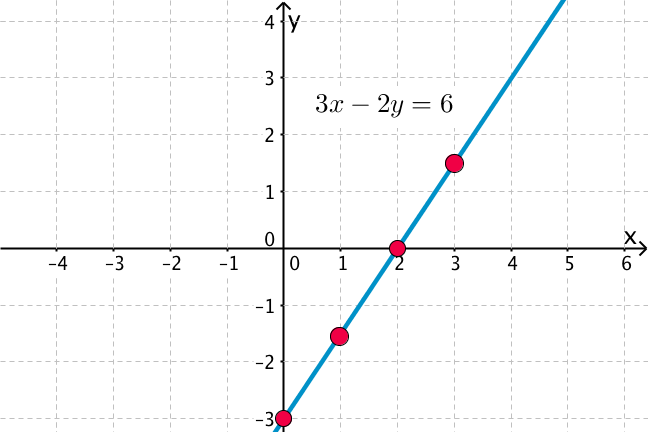 Points and lines are abstract mathematical objects, but they have a direct physical interpretation on a Cartesian plane. While Euclid in his fundamental book The Elements was rather unclear about what a point and line were, with the rigid framework of Cartesian geometry we can pin down these ideas more precisely.

In this step we look at

For us the Cartesian plane is modelled by a sheet of graph paper, labelled with two axes, one horizontal called the \(\normalsize{x}\)-axis, and one vertical called the \(\normalsize{y}\)-axis. Each axis is marked by coordinates: usually only integer values (such as \(\normalsize{0,1,-1,2,-2}\) etc) are shown, but we should be prepared to consider also fractional values. Although it is not necessary, the grid of equally spaced horizontal and and vertical lines makes it easier to graph points and visualise functions.

Q1 (E): which of the following points is not visualised on the graph below?

Q2 (M): If you plotted that missing point, it would be exactly half way between which two points?

The official definition of a line is that it is an equation of the form \(\normalsize{ax+by=c}\), for example \(\normalsize 3x-2y=6\). The coefficients are allowed to be any numbers (we will usually use integers, but fractions are fine too, and occasionally ‘irrational’ numbers such as \(\normalsize{\sqrt{2}}\) turn up too). Just like points, lines have names, so we might write \(\normalsize{l:\; 3x-2y=6}\).

Here are some additional points that satisfy our equation, arranged rather more systematically:

Having all these points, we can plot the line \(\normalsize{l}\) as shown:

Since an equation can be manipulated algebraically, we will allow that the same line can be re-expressed in different forms.

Now let’s have a look at some lines.

Q4 (E): Which of the following lines does not appear in the above picture?

Q5 (M): If the missing line of the previous question were put in, it would go through the intersections of which lines?

Relations between points and lines

The beauty of this algebraic set-up is that the answer does not require any graphing of lines: it is purely an arithmetical issue of whether the two coordinates of \(\normalsize{A}\) satisfy the equation of the line or not.

A3. All are correct except e).