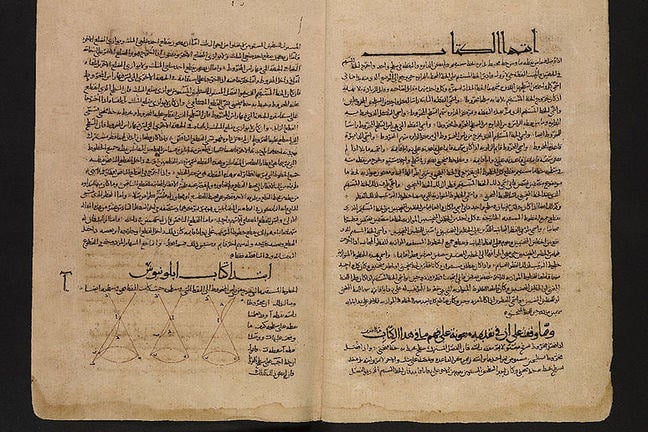 The ancient Greeks loved the simplicity and elegance of the line and the circle. In three-dimensional space, combining a circle with a fixed point not in the plane of the circle gives a cone, and it was by slicing this cone that Apollonius studied what were to become some of the most important curves in mathematics: the conic sections.

Apollonius (262 – 190 BC) was the ancient world’s greatest geometer. He lived in Perga, which is in modern day Turkey, and wrote a series of books on conic sections, including the parabola, ellipse and hyperbola. Many of the facts discovered by him would surprise modern high school students for their elegance and richness.

The ancient Greeks regarded the line and the circle as the most fundamental and beautiful of all mathematical objects, and if you connect a circle and a point in three-dimensional space with lines, you get a cone. You might be thinking of a cone like an ice-cream cone, but Apollonius realised it is useful to think of the lines of the cone as extending in both directions — a two sided cone.

Now if we slice such a cone with a plane, we get generally three different kinds of curves, along with a few more special cases. It all depends on the relation between the slicing plane and the cone.

Q1 (E): An everyday example of a conic section is the shadow from a lamp with a cylindrical lampshade onto a flat surface. What conic section would you get from the shadow formed on the floor? How about on the wall?

Q2 (M): Actually there are a few other, more degenerate possibilities for what happens when a plane slices a cone. Can you describe these?

Apollonius knew all kinds of lovely facts about the conic sections. For example…

Symmetry, centres and axes of ellipses and hyperbolas

However the parabola is quite different in this respect: it does not have a centre, but it does have a line of symmetry — but only one! So we speak of the axis of a parabola, since it is unique. Note the terminology here: axis is the singular, and axes is the plural.

Q3 (E): Can you find the centre and axes of the conics pictured?

Conjugate diameters of an ellipse

Q4 (C) Does a hyperbola also have a notion of conjugate diameters?

The polarity defined by a conic (advanced topic)

Apollonius knew that if you took any conic section, then that curve determined a beautiful and remarkable correspondence, often called polarity, between points and lines in the plane, that generalises the correspondence between a point on the curve and the tangent to the curve there.

Remarkably this dual line is independent of the choices of lines through \(\normalsize A\), as Apollonius realised. 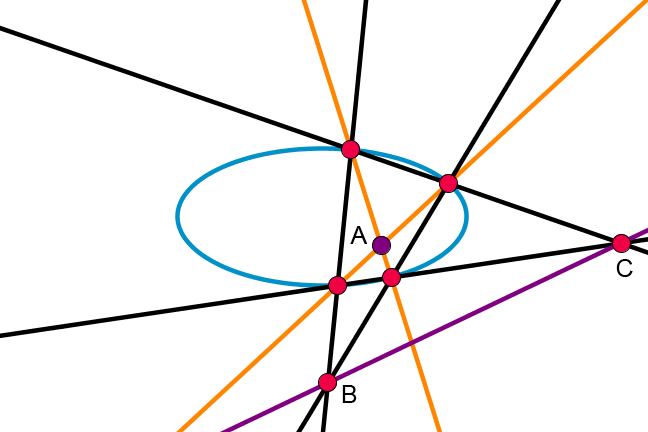 Apollonius did not know everything there was to know about conics. He was also an astronomer, and interested in the ancient problem of describing the motion of the visible planets in the night sky. Wouldn’t he have been amazed to learn that two thousand years after him, the very conics that he loved so dearly would prove to be the key to unravelling this greatest scientific problem!

A2. If the plane passes through the apex (point) of the cone, then we could get a pair of lines, or a single line, or just the single point of the apex itself. So these are also in some sense degenerate conics.

A4. Yes, the hyperbola also has conjugate diameters. You can verify this yourself if have a picture of a hyperbola to play with.