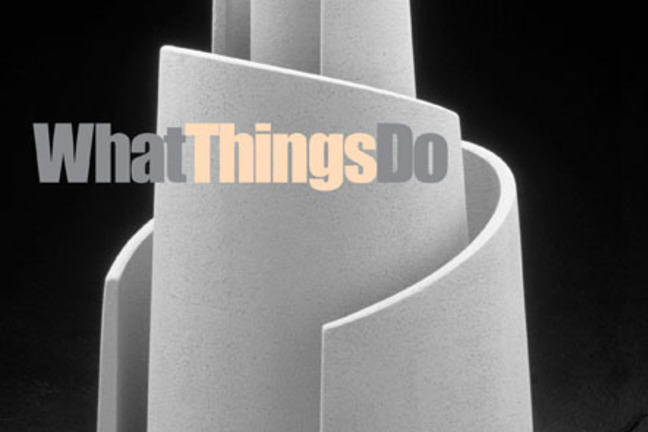 Book Cover of Verbeek's book "What Things Do: Philosophical Reflections on Technology, Agency, and Design" (2005)

In this article we examine how my own theory relates to what you have learned so far.

In all of these new human-technology relations, new ‘intentional relations’ between humans and the world come into being. The concept of intentionality plays a central role in the phenomenological tradition, as part of its relational approach, to conceptualise the relation between human beings and their world. Human experience has an intentional structure: human beings are always directed toward reality. We cannot simply “see,” but we always see something; we cannot simply “hear” but always hear something; et cetera. We cannot understand human experience without taking into account this intentional directedness towards the world. In all of the human-technology-world relations Don Ihde analyses, technologies mediate this intentionality. In the new human-technology relations identified above, the technologically mediated character of intentionality takes on a different shape.

In the ‘fusion’ relation, technologies merge with our physical body. Good examples are neuro-implants for deep brain stimulation; cochlear implants that enable deaf people to hear again, or artificial heart valves and pacemakers. In all of these cases, the relations between humans and technologies are more intimate than in the embodiment relation. They involve much more than wearing a pair of glasses, or listening through a cell phone. Lucie Dalibert even speaks of ‘somatechnologies’: technologies that blur the boundaries between body and artefact (Dalibert 2014). This cyborg relation can be schematised as:

This formalism is meant to indicate how, such as with implants, the user and the technology become fused. They do not merely relate to the world as one, they are one. From this ‘fusion’ relation, a ‘hybrid intentionality’ emerges. Rather than being a technologically mediated form of human intentionality, it is the intentionality of a new, hybrid entity: a cyborg. Contrary to embodiment relations, no clear distinction can be made here between the human and the nonhuman elements in these relations: together, humans and technologies form a new entity, which is directed towards the world in a ‘hybrid’ way, integrating human and nonhuman elements.

In the ‘immersion’ relation, the configuration of humans and technology takes yet another shape. Here, technologies do not merge with the body but with the environment. And the relation between human beings and that hybrid environment is interactive: smart environments ‘perceive’ their users too, and ‘act’ upon them. Examples are ‘smart toilets’ that automatically analyse one’s excrements and produce a medical report on the basis of this, or ‘smart beds’ in hospitals that can detect if somebody falls out of bed or steps out of bed. Schematically:

This formalism suggests that the technology and the world become fused. Besides, the intentionality that comes with this type of relations has a ‘bi-directional’ character: human beings are directed towards technologies that are also directed towards them. This bi-directionality can have several implications. On the one hand, it makes it possible for human beings to experience how technologies ‘experience’ them, resulting in a ‘reflexive intentionality’: smart toilets open a new relation to oneself. On the other hand, it opens the possibility to be immersed in how smart environments perceive and act upon human beings, as is the case for some ‘persuasive technologies’ that give unsolicited feedback on one’s behaviour. An example is the ‘persuasive mirror’ that was designed for waiting rooms of medical doctors to give people feedback on their lifestyle. When looking in the mirror, you actually look into a camera and see yourself on a screen, but a face recognition system that is linked your medical record makes it possible for the system to morph your face into what you will look like in five years time if you don’t give up smoking, eating too much or working too hard. People who look into this mirror, are immersed in the mirror’s intentionality towards specific aspects of themselves, resulting in an ‘induced’ intentionality.

The relation of augmentation, to conclude, adds a second layer to our world, a second field of attention to be intentionally directed to. In addition to the sensory relation we have with the world ‘through’ such an augmented reality technology, we also have a relation to the information it gives us. Google Glass is a good example of such an augmented reality technology. People wearing it can get information on objects and buildings they see, and potentially also about human beings, when the technology would be equipped with face recognition technology; they can exchange messages, take pictures and record videos, and surf the internet ‘in the background’ of their activities. When using Google Glass, people both have an embodiment relation with the Glass itself, and a hermeneutic relation with its screen that offers a representation of the world. Therefore it offers not one, but two parallel relations with the world. Schematically:

This formalism indicates that, such as with a pair of glasses I say “I see the world,” rather than “I, through my glasses, see the world.” While it also suggests that a technology is revealing a world to us we are incapable of seeing without it. The intentionality involved in such ‘augmentation relations’ can be indicated as ‘bifurcated’: there is a split in people’s directedness at the world, because two parallel fields of attention emerge.

From all of these relations, technologies help to shape human experiences and practices. Rather than being external to human beings, they help to shape what it means to be human. Technologies help to shape our knowledge of the world, our moral actions and decisions, and even our metaphysical and religious frameworks: MRI scanners provide neuroscientists a highly specific way to access the brain, while obstetric sonography informs ethical decisions about abortion, and IVF reorganises the boundary between the given and the made, or fate and responsibility. Technological mediation is part of the human condition - we cannot be human without technologies.

This makes the design of technologies a highly responsible activity. Designing technology is designing humanity, in a sense. Any technology will help to shape human actions and experiences, and will therefore have an impact that can be understood in ethical terms. Designers materialise morality (cf. Verbeek 2011). Beside functionality, interaction, and aesthetics, therefore, mediation deserved a central place in the conceptual framework that implicitly and explicitly guides design activities.

Dalibert, Lucie. Posthumanism and somatechnologies: exploring the intimate relations between humans and technologies. No. 14-303. Universiteit Twente, 2014.

End of the course

Discover the University of Michigan's involvement in the origins of Earth Day and get empowered to take action on climate change.