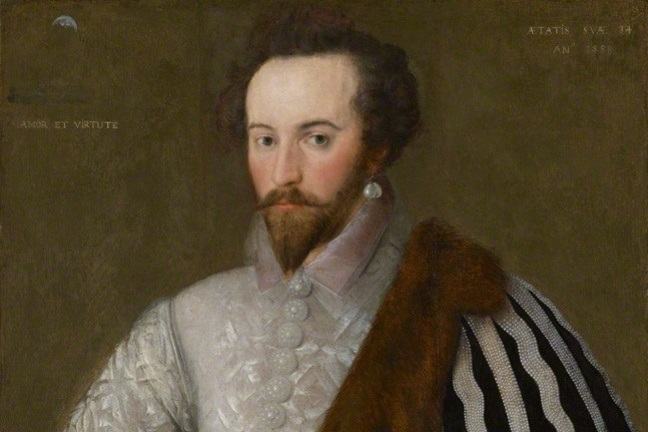 When we think of Walter Ralegh (1554-1618) a number of images come to mind – explorer, author, courtier, favourite of Elizabeth I…and prisoner.

Ralegh was imprisoned in the Tower of London three times. The first time was a five-week stretch in 1592, for marrying one of the Queen’s ladies-in-waiting without royal permission. The second came at the end of Elizabeth’s life when Ralegh was held for 13 years, 1603-16, for allegedly conspiring against her successor, James I. His final stay at the Tower began in 1618 when he was accused of deliberately inciting war between England and Spain.

Ralegh’s early contact with the royal court is unclear, however by 1581 he began to attract the attention of Elizabeth I. The well-known tale of Ralegh using his cape to cover a puddle for the Queen, and of the two couplets scratched into a window pane are little more than rumour and gossip. However, it is clear there was a level of physical attraction. Ralegh was taller than most of his contemporaries, at around six feet, dark-haired and pale with refined features – the definition of ‘tall, dark and handsome!’

Ralegh quickly rose in Elizabeth’s favour; he knew how to play the role of the charismatic courtier and wrote a number of poems to the Queen. Their intimacy was obvious and soon Ralegh began to accrue a number of rewards as a result of this favour.

He was granted land in Dorset and Durham House in London. His role in shaping the expanding empire was in no small part thanks to the Royal Charter (1584) which authorised his colonisation of new lands. He is now famous for bringing back the ‘Virginia’ potato from the New World, although they were not widely eaten for a long time after their cultivation in Ireland. He also received a patent for wine-selling and the licensing of vinters (wine-sellers) worth at least £700 per annum; it was this patent that was to be the foundation of Ralegh’s wealth for the rest of his life. When Ralegh was knighted on 6 January 1585 he was appointed Vice-Admiral of the west, Lord Lieutenant of Cornwall.

Ralegh’s good favour with the Queen was to change drastically in the early 1590s when he entered into a relationship with one of her ladies-in-waiting, Elizabeth, or Bess, Throckmorton. At some point in late 1591 Bess fell pregnant and the two were married in secret. They were fully aware that when the news became known it would displease the Queen and Ralegh attempted to quash the rumours of the marriage, even going so far as to lie about it in order to protect his career. Bess gave birth to a son, Damerei Ralegh, on 29 March 1592 and just under a month later, returned to court, still attempting to keep both marriage and motherhood under wraps, but they had underestimated the intensity of the Queen’s displeasure and both were sent to the Tower of London on 7 August.

As we learnt in the Step 2.12, as a gentleman prisoner, Ralegh could live fairly comfortably. He had £208 to spend on food per annum and for a time his wife and son were allowed to live with him along with three servants. His second son, Carew, was even born at the Tower. 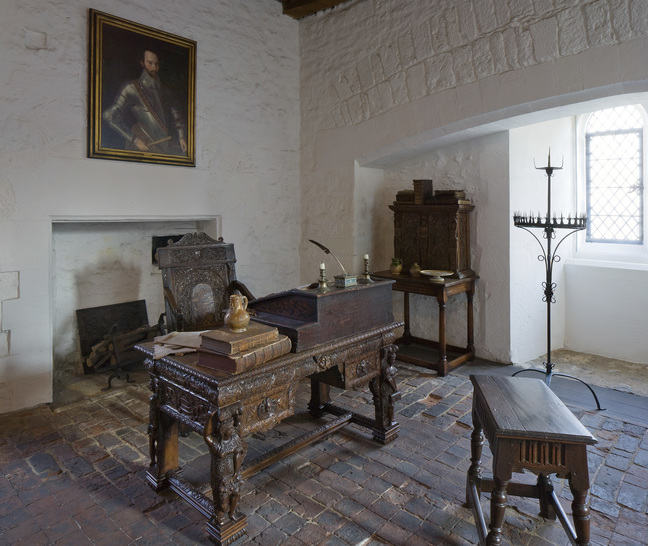 Ralegh was allowed to exercise in the garden by the Bloody Tower, so much so that James I’s ministers complained about the ‘lawless liberty of the Tower’. He was permitted to grow exotic plants he had brought back from the New World and to convert a hen-house in order to brew herbal medicines. You’ll be looking more closely at some of Ralegh’s concoctions in the next Step.

Ralegh was also permitted to receive visitors, who included Henry, Prince of Wales. It was for the Prince that Ralegh prepared his great work, The History of the World, supplied with books by his friends. However, when the Prince died in 1612 Ralegh abandoned the planned second and third volumes of the history.

Whilst Ralegh experienced more freedom than some of the other prisoners, it’s important not to paint too fine an image of life within the Tower walls. Ralegh’s health and morale were often poor and in 1603, he made an unsuccessful attempt at suicide.

He was stripped of all his honours, his estate was confiscated and his possessions sold to pay for his upkeep in the Tower. He spent much of his imprisonment worrying about the reduced circumstances of his family and wrote multiple letters trying to save his beloved Sherborne estate. He wrote in a letter to the Earl of Salisbury in 1605:

‘I beseech your Lordship, even as you must one day beg comfort from God and cry unto him for his abundant mercy, that you will be pleased to spare the time, and to finish and effect, in some sort, your heart’s intent toward me. If I could either help or blame their cries and impatience, I would, for myself, leave all to God and your Lordship. But, if your Lordship spare one thought towards this estate I mine, I cannot but hope of some happy end; which I leave to your Lordship’s goodness to resolve of, and rest your most miserable creature to do you service.’

Ralegh was, naturally, also concerned about the health of his family, especially during the progress of the plague in 1604. In a letter to the Viscount of Cranborne, he wrote:

‘danger of death by the palsy; nightly, of suffocation, by wasted and obstructed lungs. And now, the plague being come at the next door unto me, only the narrow passage of the way between. My poor child having lain this 14 days next to a woman with a running plague sore, and but a paper wall between – and whose child is also this Thursday dead of the plague. So as now my wife and child, and others in whom I had comfort, have abandoned me; and in what fearful estate, the Lord knows. My most humble desire is to be removed elsewhere, even to what place which God’s goodness, and Charity, shall move your Lordship’s heart; that I be not left alone and remediless as well for this visitation as for other as lamentable diseases which possess me.’

In 1616, Ralegh was released to undertake an expedition for James I to Guiana in search of gold. But the expedition was a disaster and he was charged with deliberately inciting war between England and Spain. He returned to the Tower in 1618 and was executed two months later.

For those of you interested in the spelling of Ralegh’s name, here’s a blog post from historian Matthew Lyons on the subject.