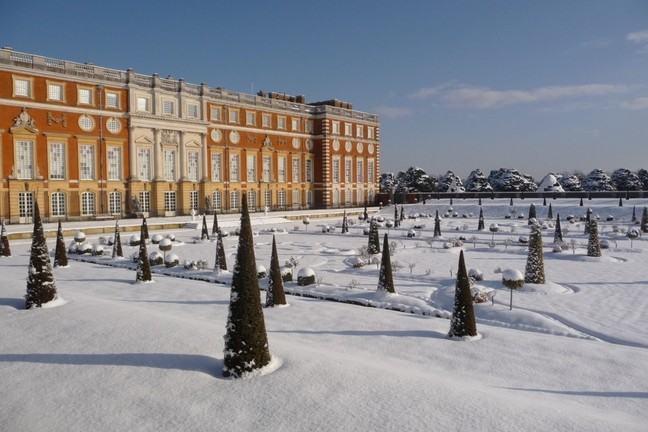 The South façade of Hampton Court

The Christmas of George I’s court has to be seen in the light of the English Civil War (1642–1651) and the period following the abolition of the monarchy, known as the Commonwealth or Interregnum (‘between reigns’). This interregnum lasted from 1649 – 1660, and was effectively a period of parliamentary and military rule, with Oliver Cromwell at its head.

Cromwell, a deeply religious and puritanical man, tried his best to eradicate the bad behaviour and riotousness associated with the festive season, transforming it into a sober religious day, to be celebrated with prayer rather than gluttony. Christmas was effectively abolished under the Commonwealth, and when it was re-established in 1660 it was never quite the same again.

‘More mischief is at that time committed than in all the year besides, what masking and mumming, whereby robbery, whoredom, murder and what not is committed? What dicing and carding, what eating and drinking, what banqueting and feasting is then used…to the great dishonour of God and impoverishing of the realm’.

(From The Anatomie of Abuses by Philip Stubbes, 1583)

Cromwell and his puritanical followers disapproved the way in which Christmas was seen as an excuse for 12 days of drinking, eating and partying, and argued that there was no justification for it in the Bible. The pinch point came in 1644, when Christmas day fell on a Wednesday – a fast day – and, under pressure from the Scottish, who were unyielding on points of Puritan custom, Parliament ordered that the 25 December should be kept as a fast day.

The Mayor of Canterbury decreed that evergreen decorations were banned, as were plum pies. No services were to be held in churches, while markets and shops were forced to open. Parliament shut down the theatres, and sent soldiers to tear down the evergreens. There were riots in response and several people were killed, as mobs forced the shutters on shops closed, and gangs of youths played football in the streets in flagrant breach of the law.

‘They were of opinions that… Plumb-Pottage was mere Popery, that a Collar of Brawn was an abomination, that Roast Beef was Antichristian, that Mince Pies were Relics of the Whore of Babylon, and a Goose, a Turkey, or a Capon, were marks of the Beast’

(From the 1652 pamphlet The Faithful Scout)

The impact of the Interregnum on Christmas was lasting and significant. The Twelve Days were never again to be treated with the same importance as they once were, and, although many still celebrated the whole period, the significance of the individual feast days within the period diminished. ‘Christmas scarcely should we know, did not the almanacks it show’, declared Poor Robin’s Almanack in 1709, and some churches complained that they were now empty on Christmas Day as people stayed away or travelled to see friends and family. Dissenters, of which there were many, opened their shops on Christmas Day to show their disdain for the whole thing.

Some foods had by now become irrevocably associated with Christmas, although many still continued to be eaten at other feast occasions in winter. With the demise of the Twelve Days, Christmas foods were now increasingly associated with only the main meal on the 25 December. Plum pottage, for example, was sometimes now called Christmas pottage and Christmas Day without mince pies was unthinkable. For landowners, large quantities of seasonal game from the estate continued to be a significant feature of the main Christmas Day meal (as with any other dinners during the winter). For both the rich and those who had to buy their meat as opposed to hunt it, farmed birds provided other main source of meat. Turkey remained popular, eclipsing peacock as a large feast bird, and was now almost obligatory on a rich person’s Christmas table.

Roast beef was also well-liked, especially accompanied by a new development: the plum pudding. This was a thickened version of the plum pottage, cooked in a wetted and floured cloth. Rapidly becoming a winter staple, it could be made in advance if necessary (although most recipes assumed it would be cooked and served straight away). Together with roast beef, plum pudding came to symbolise Britishness, in culinary form. The pudding was eaten throughout winter, either served hot from the cloth, or sliced and fried. Cloths had been in use on a small scale for puddings by the late medieval period, but it was in the late Stuart and early Georgian eras that they became widely used. By the 1750s ceramic moulds provided an alternative, but the cloth was quick, easy and effective, and the spherical pudding quickly became compulsory on every Christmas table. 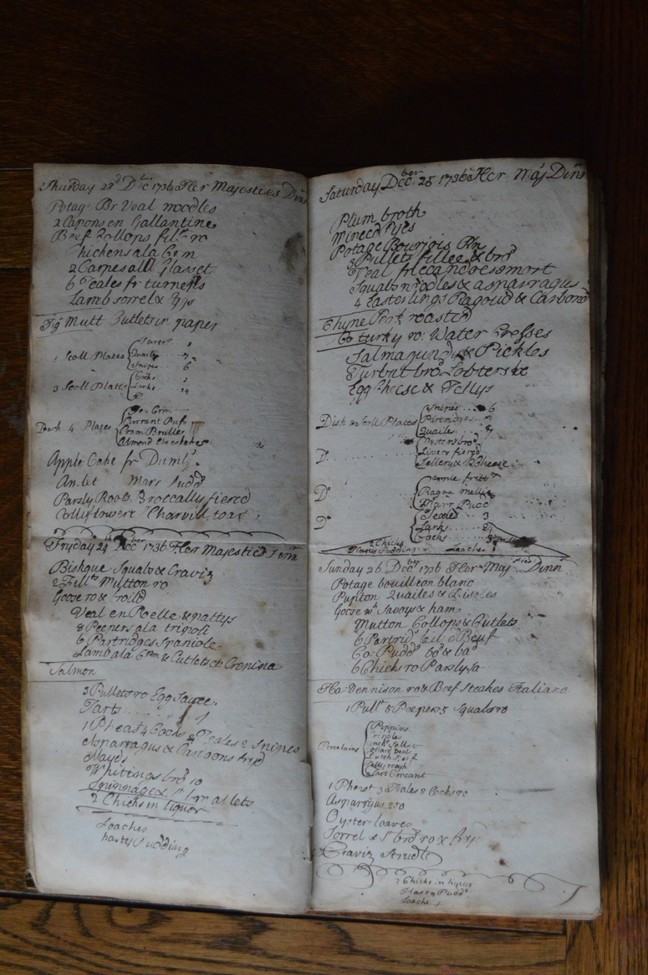 The royal table was no exception to these staple Christmas fares. In 1736 George II was in Hanover for Christmas but his queen, Caroline, ate her Christmas dinner on the 25 December at Kensington Palace. You can see the menu for this in the image above. Her first course consisted of plum broth [pottage], minced pyes, potage bourjoirs [bourgeois], fileted and broiled pullets [broiled is also known as grilled]. As well as, fricassee of veal, squabs with noodles and asparagus [a squab is a young pigeon], and Easterlings ragoo’d and carbon’d [an Easterling is another name for a widgeon which is a type of duck, and the ragoo/carbonade denotes a rich preparation with a sauce based on fashionable French techniques].

The soup and broth/pottage were then replaced by dishes of roast pork or a roast turkey with watercress before the second course was set: salamagundy with pickles [salamagundy is a large, ornate salad which usually included a layered meat centrepiece], broiled turbot and lobsters, egg, cheese and jellies. There were also composite dishes of roast snipes, partridges and quails; teals [a type of duck], larks and chickens, as well as broiled oysters, fried liver, celery and cheese, apple fritters, marrow pudding [bone marrow, not an overgrown courgette/zucchini], and two additional dishes of hasty pudding and milk jelly.

Queen Caroline’s Christmas day menu can still be seen at Kensington Palace, and it features some of what we might expect to find on a Christmas dinner table today, including turkey and mince pies. We’ve included a recipe for Georgian mince pies to try and home; why not serve them with a napkin centrepiece from Step 3.10 and share on the Padlet Wall?