Sanjay Mistry, our Senior Visual Designer, discusses the benefits of an agile approach to design and offers six tips based on the way we work at FutureLearn. 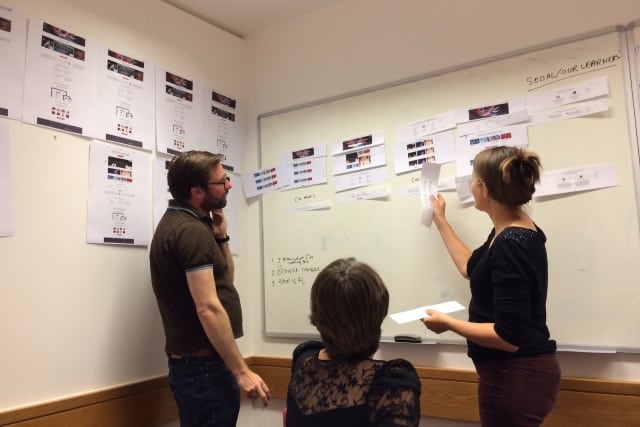 In this internet of ours there’s been a lot of talk about agile methodologies. At its simplest, this means building something rapidly, getting it to users and then – equally rapidly – correcting your mistakes.

Alternatively, some larger organisations have often employed a “waterfall” method, in which they typically perfect a piece of work over a period of months (or even years) and then release it with a cacophony of pomp and bluster that would satisfy even the most ardent royalist.

Under the waterfall approach, a designer would often labour over every single option in an honest attempt to ensure they hadn’t missed anything. They’d create as many options as possible, probe each element, explore variations, and then refine and repeat.

Contrary to perennial optimism, this way of working was like dragging a dying dog on a hot street – as well as being very labour intensive, it would often leave the product with an unhelpful array of inflexible elements. At the time, it was generally thought that this level of detail was proving the efficacy of the designs – refine the elements as you sally along, and then attempt to mould everything else around it.

Dotting the i’s and crossing the t’s

Most of the time designers sweat the details. There’s nothing fundamentally wrong with this, unless we’re allowed to abandon ship and make for the shore, but it’s a bit like doing all of the sanding before the cutting. Nonetheless, as designers, we have a tendency to continue to fall into this trap. We can get a little too theatrical about one idea before we’ve made sure it’s really the most appropriate solution.

For designers, one of the problems with this way of thinking is that, while we thought we were creating the perfect solution, we ended up chaining ourselves to a specific implementation. And this implementation would inevitably end up becoming a burden to the product. The hangover would leave you either trying to crowbar that mission statement onto the side of a pencil, make other features adapt to its increasingly frustrating limitations, or start all over again. Pretty clown shoes.

In my experience, this usually happens when things aren’t going quite as planned. When they are, we don’t necessarily need to find the “perfect” one. You could equate it with searching through 2,000 photos on your favourite stock image site in an attempt to find the “perfect” one. Not only is this time consuming, but the very idea of what perfection is may also change over time.

(Half a) 12-step program for how we approach agile design

Here’s how we tackle some of these issues at FutureLearn.

1. Continue to explore, but quickly

Designers sometimes need to cover a lot of conceptual ground in order to best understand the problem. We’re still able to do this, but we try to be a lot snappier about it. For example, if 10-20 options can be produced in under an hour using only simple paper sketches, we’ll do that.

2. Talk to one another

Working in isolation can be pretty tough, and getting people to converse openly and freely without fear of reproach or ridicule is something we try and foster as much as possible. This doesn’t necessarily mean formal meetings, but maintaining a regular informal dialogue by talking with people around the office, and using real-time messaging such as Slack as a back-up.

3. Resist the urge for perfection

If it doesn’t work, we’ll try again and experiment some more. If it does, we’ll keep refining the idea using placeholder elements (however uncouth their appearance) and producing drafts for variations of the feature(s) as quickly as possible. The aim is to see how the design adapts to different mediums and user needs, and then spend time fine-tuning throughout its evolving lifecycle.

The concept of placing every pixel in exactly the right place in the age of multiple devices no longer applies.

Designers have a bit of a reputation for this, and designing in the hope of an award or accolade can leave us trying to create something bigger than what our users actually need. Sharing our work regularly within the design team itself, as well as with the entire company at fortnightly sprint reviews, ensures we keep ourselves open to critique and improvement.

If it looks like it isn’t working, we tend to bin it quickly. The sigh isn’t so heavy when discarding an option after only a couple of hours, rather than 100 hours.  Our recent homepage explorations demonstrated a more ruthless culling of elements that weren’t working for whatever reason. Previously, we would have persisted in polishing all 20 options before dissecting them.

We test a variety of “roughs” and hi-fidelity prototypes, placing people in scenarios that are limited in subjectivity. For example, “Your friend recommended you a course on ecosystems and nature, which is about to start. Point to where you would look first.” The aim is to get clear feedback that allows us to fix existing issues and/or avoid repeating internal debates.

Although working under agile methodology has its risks – including the possibility of making a more public mistake – it gets closer to a congenial ground for all. It’s fast, cheap, allows designers to focus on the right details at the right time, and removes a lot of the hurdles encumbered by more regimented methods of working. That doesn’t necessarily mean less exploration, trying to avoid hard work or compromising heavily on quality, but it does encourage us to use our time better.

It doesn’t have to be perfect or save the world, it just has to work across a variety of mediums. Made sweeter with a generous smattering of internal user testing, it’s a pretty sensible approach to digital product design. The two are condemned to each other. For now.

Want to learn more about the way we work at FutureLearn? Take a look at all of our “Making FutureLearn” posts.