Find out more
Home COVID-19: Are the Olympics under threat?
Published on March 5th, 2020

Discover how the coronavirus COVID-19 is affecting the sporting schedule, including the Olympic Games in Tokyo. 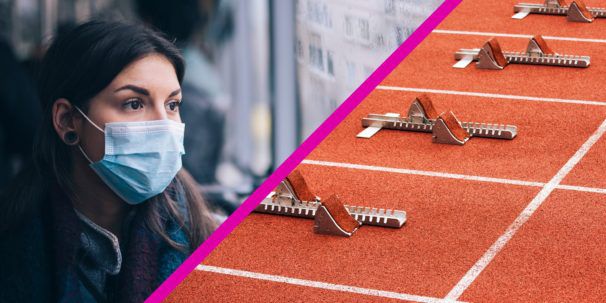 Sport is normally one of life’s great certainties – the comings and going of leagues, tournaments, and games being as comfortingly predictable as the seasons for sports fans.

However, as the coronavirus COVID-19 continues its spread across the world, one of the more unexpected consequences (alongside shortages of toilet paper and hand sanitiser) is its impact on the sporting schedule – placing even the Olympic Games in doubt.

In February, the Chinese gymnastics team were forced to pull out of the World Cup in Melbourne due to the Australian government’s ban on travel from China, while the Chinese tennis team also had to withdraw from the Davis Cup. Meanwhile, the Chinese women’s football team were quarantined inside an Australian hotel for days before being allowed to play.

With the virus spreading beyond the initial outbreak in Wuhan, the start of the football season in China was completely suspended, with play not expected to resume until May at the earliest. For some teams, this has meant being stranded at pre-season training camps in the Middle East, unable even to return to China due to travel restrictions.

More recently, sporting events elsewhere have begun to feel the bite. The Japanese and Korean football seasons have been similarly suspended, and group stage games for the Asian Champions League have been delayed.

As the outbreak has moved to Europe, the continent’s sporting calendar has been thrown into turmoil. Italy has become the virus’ European epicentre, and it’s that country that’s been hardest hit so far in terms of sporting upheaval.

Italy’s Six Nations games with Ireland and England have been postponed, and Serie A (Italy’s top football division) has taken the decision to either delay matches – including the potential title decider between Juventus and Inter Milan – until later in the year, or play games behind closed doors.

As a result, Inter recently played a European game against Bulgarian side Ludogorets in an empty Milanese stadium, a surreal development that could be a taste of things to come should the virus reach epidemic levels across Europe.

The Swiss league has already taken the measure of suspending its football season, and there are now question marks about whether the Italian league season can be completed at all. The Italian authorities have announced that all Serie A games will be played without crowds until April and the English Premier League has admitted games will likely have to be played without fans.

The nature of the fight against COVID-19 means that previously unthinkable options are either becoming the norm, or are starting to be openly discussed. If the Louvre can close, and Italian schools and universities are being shut for weeks, who’s to say if this summer’s European football championships – a pan-European event for the first time – will go ahead? Or, for that matter, the Olympic Games in Tokyo?

The coronavirus seems to most adversely affect elderly people – and with the oldest populations in the world, Japan and Italy have been badly hit. The Japanese government has closed schools until April, and quarantined the Diamond Princess cruise ship to try to slow the virus’ advance in the country.

Government officials have publicly denied that the Games might be cancelled – although delaying them until later in the year is a possibility. However, that would be a costly setback, and Japan is keen to emphasise that the country is open for business, well-aware of the high economic cost coronavirus has already taken on global stock markets and national tourism industries.

Nevertheless, with the world indoor athletics championships in China already called off, the Games have to be in doubt, despite defiant state assurances to the opposite.

Whatever happens next, it’s clear coronavirus will continue to disrupt our lives for months to come, turning societal certainties on their head for at least the near future. Governing bodies are having to make hard decisions about how to balance the need for sporting integrity with urgent public health concerns.

Ultimately, in this match, public health surely wins out every time.

To explore all the issues around the coronavirus, including how it spreads, and when we can expect a vaccine, enrol in the London School of Hygiene & Tropical Medicine’s free COVID-19 course today.