Find out more
Home Arrr you ready to talk like a pirate?
Published on September 19th, 2014

Today, people around the world will adopt Devonshire accents and call each other “me hearties” for Talk Like a Pirate Day. But are these stereotypes correct? Here, Peter Campbell – an educator on the University of Southampton’s “Shipwrecks and Submerged Worlds” course – reveals that talking like a pirate may be easier than you think. 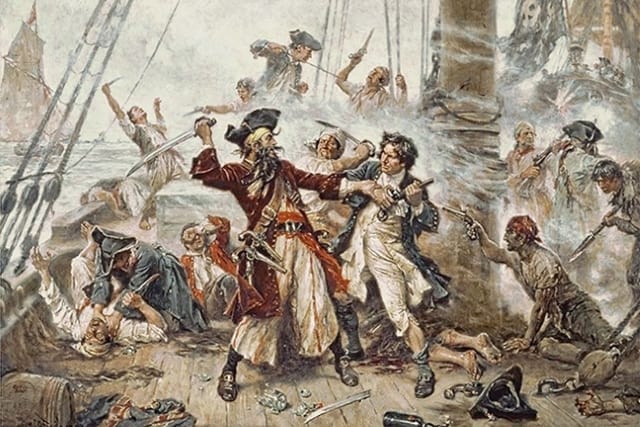 What did pirates sound like? How do we know? I wish I could say a wizened old parrot survived the 18th century to have pirate speech patterns recorded by an early anthropologist, but alas it is not so. In fact, the evidence for pirate speech is less compelling, despite the fact that we now know more about pirates than ever before, thanks to maritime archaeology.

There has been a flood of pirate discoveries recently, from Blackbeard’s Queen Anne’s Revenge to Captain Kidd’s Quedagh Merchant to several ships from Captain Henry Morgan’s fleet. We now know more than ever about the day-to-day life of pirates, but what does this tell us about how they spoke?

First we need to understand where pirate talk comes from. Pirates have been a popular subject for a long time, romanticised by Charles Johnson (possibly a pen name for Daniel Defoe) and Robert Louis Stevenson. It is from these accounts that we get pirate stereotypes, which were picked up by other writers and later filmmakers. The Devonshire accent associated with pirates today comes from Stevenson and later depictions of his character Long John Silver in Treasure Island. Once that seed was sown, it was assumed that all pirates should sound alike.

The reality is that pirates during the Golden Age of Piracy came from diverse backgrounds and pirates are not a cohesive culture or nationality that would have a developed speech pattern. There are records of English, French, Dutch, Moorish, and African pirates – every nation and accent. The personal artefacts we find on pirate shipwrecks attest to the diversity of these crews.

In fact, the concept of pirate, as opposed to a legal privateer, is purposefully ambiguous to allow people to blur the line between legal and illegal. The average pirate was also likely to be a merchant sailor and naval personnel over the course of their career, switching between these jobs as opportunities allowed. So a pirate sounded like the average sailor of the 18th century; the common person’s accent of the region where they were born. Add in the fact that piracy is one of the world’s oldest jobs, mentioned in early Egyptian correspondence, and there is no single accent that is truly “pirate.”

What does this mean for Talk Like a Pirate Day? It means we already are pirates, every day of the year.