Find out more
Home / History / Gender & Feminism / A Global History of Sex and Gender: Bodies and Power in the Modern World / Gender and Mothering in West Africa

Gender and Mothering in West Africa

GENDER AND MOTHERING IN WEST
© University of Glasgow

Broadening the scope of historical analyses of gender and care beyond European or American contexts highlights that the nature of caring structures and gendered work in the Western world was not universal. In other parts of the world, very different processes have occurred. This article introduces some of the diverse forms of ‘social parenting’, ideas about mothering and motherhood, and their relationship to changing notions of gender in West Africa. This huge region stretches from Mali and Senegal in the north-west, to Nigeria in the south-east. Even Nigeria alone is home to over 500 languages and across the region, there is a really wide variety of religions, spiritual beliefs and social and political norms. It is impossible then to generalise about West Africans experiences of parenting or ideas about gender. Instead, this article draws on a few selected examples to show how practices changed historically, some of the diversity of conceptions of gender and motherhood across the region, and the rich debates that have emerged from West African feminist thinkers. 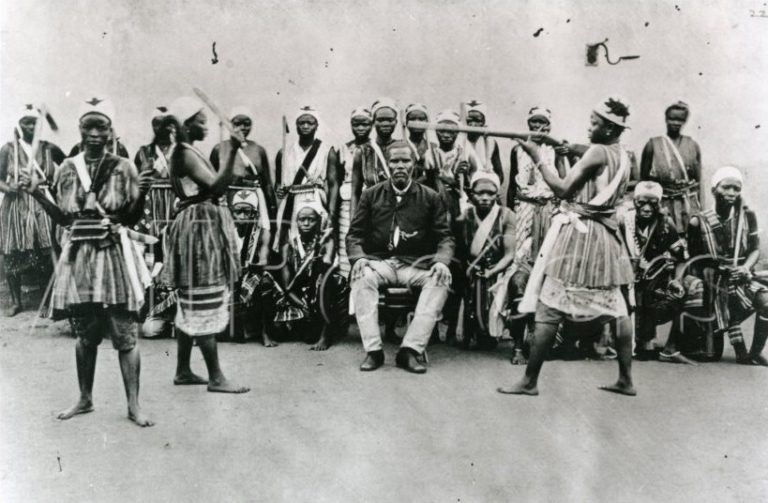 In the 1860s, King Gezo claimed to have ‘created’ the mino (our mothers) or ahosi (King’s wives), a female fighting force which became known as the Amazons of Dahomey in Europe. In fact, such a force had existed since the eighteenth century at least. Likely King Gezo was only responsible for consolidating and institutionalising this force. While the mino became renowned internationally, thanks to the European practice of mounting ‘spectacles’ which sensationalised and publicised selected aspects of African culture, they were not unique. Other West African powers made use of armed female cohorts as bodyguards and warriors. The Yoruba kingdom of Oyo and the Borgu kingdom of Kaiama (both in modern-day Nigeria) for example, had skilled and armed female bodyguards. 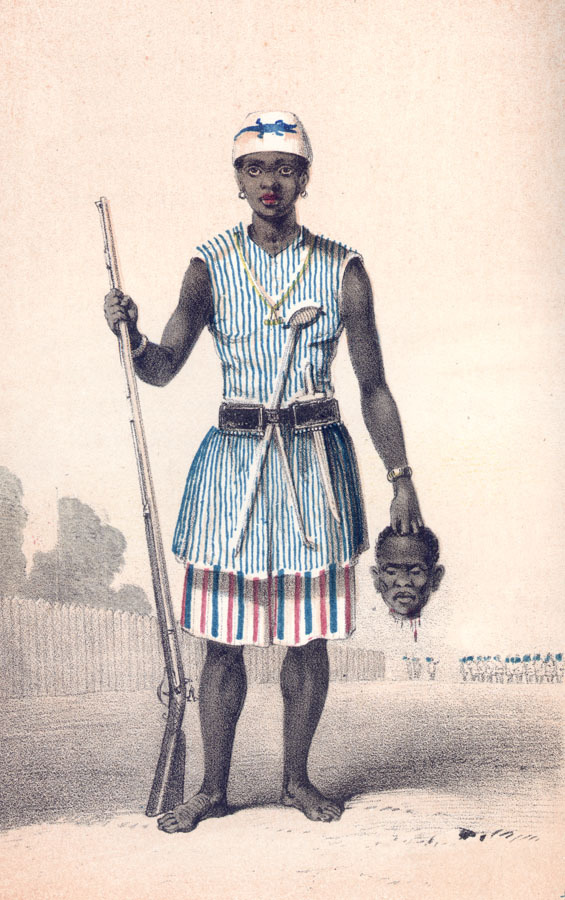 An individual leader of the Mino, drawn by Frederick Forbes in 1851, Public Domain

The Dahomey warriors (though dubbed Amazons by outsiders) were known in Dahomey by their relationship to the King, and by extension to the people. Their political position within the court was related to their status as wives and mothers. In a similar vein, army leader Musoo (the sister of the leader Kehbah, a follower of Samori Toure in lagte 19th centry Guinea) made direct reference to the link between power and reproduction, when she was reported to say in battle, “I am a woman, and unless you are not brought in this world by a woman, and sucked milk from woman’s breasts, I cannot conquer you”. The relationship between women and power in 19th century West Africa included the notion that women’s reproductive potential made them particularly potent.

The potency of reproductive power was represented in different kinds of symbolic ‘political motherhood’. Lorelle Semley examined how Yoruba-speaking people understood motherhood less as a biological function of reproduction, and more as a title to be bestowed on those who exercise power over people, control households, and are held in high esteem within their communities. This kind of ‘public motherhood’ links to the social parenting and deconstruction of childcare practices which can be seen in communities where ‘mothering’ is work taken on by an extended kin or community network. In Sierra Leone, for example, the presence of women’s societies have long bonded women into community age-groups – girls who all went through the rituals of becoming adult together – and those age-groups could lend support to each other in feeding, soothing and caring for infants and children. 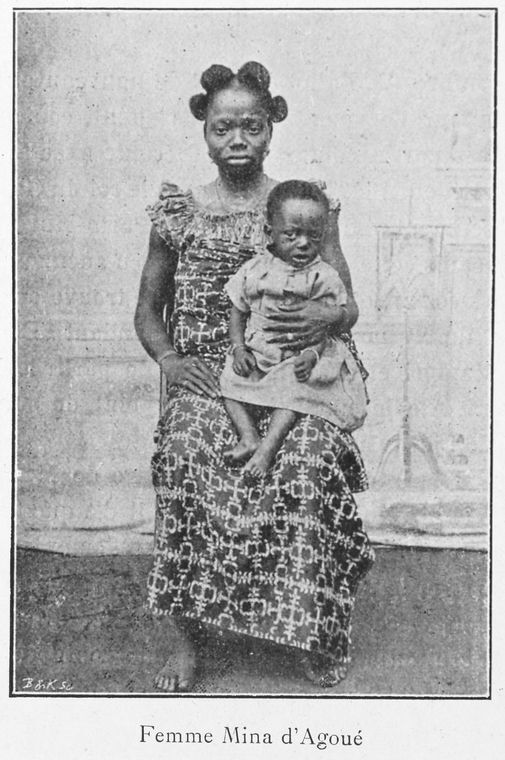 Among the Baatombu in modern Benin, child fostering and adoption were considered the ‘normal’ way of parenting until recently. Child fostering is common across West Africa, sometimes as a response to a crisis, but often as a way to share kinship with a child across a wider group of people, increasing a child’s opportunities to advance. These practices in some ways resemble the old adage ‘ it takes a village to raise a child’, as childcare could be distributed beyond biological parents. Fostering was also carefully calibrated to consider relative status and power, with powerful people able to consolidate their influence through fostering many children and thus having some control over their future. Powerful chief and leader Mammy Yoko, in late nineteenth-century Sierra Leone, for example, was known to foster girls in order to be able to arrange their marriages to allies and followers.

Oyèrónké Oyewùmí discusses the risks of imposing Western feminist notions of ‘motherhood’ onto African contexts in the conclusion to her book What Gender is Motherhood? Her analysis identifies the historical period of colonial rule in West Africa, and in Nigeria in particular, as a time when new types of gender identities and role were imposed on people, fundamentally changing the way men and women related to each other, and also shifting the very meanings of words associated with different gender roles. This is a critique which runs through indigenous studies scholars work beyond African societies. The anti-democratic and violent nature of European colonial rule in many parts of the world resulted in a forceful imposition of patriarchal and heteronormative ideas and practices. 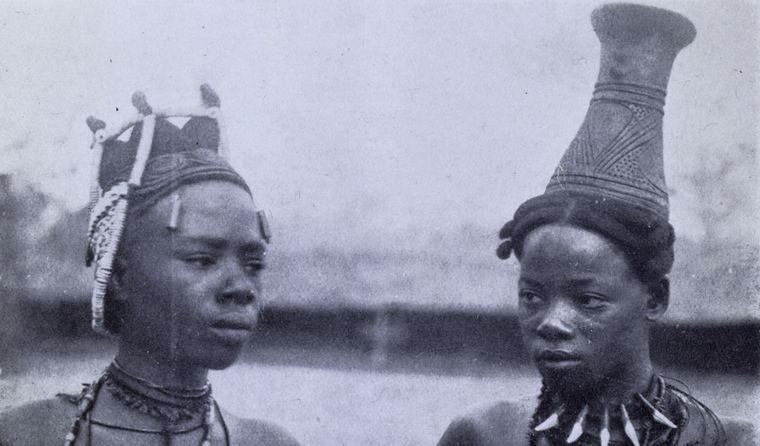 Among the Ibos of Nigeria, an account of the curious & interesting habits, customs, & beliefs of a little known African people by one who has for many years lived amongst them on close & intimate terms, by G. T. Basden.

In some cases, West African women, actively resisted against colonial impositions that they saw as limiting their role. In 1929, tens of thousands of women participated in Ogu Umunwanyi (in Igbo), Ekong Iban (in Ibibio), or the Women’s War in British-controlled Nigeria. Madame Nwanyeruwa, an Igbo-speaking market woman, who had travelled to Oloko to protest new colonial taxation, led the revolt. The women protested at the office of the British-appointed Warrant Chief Okugo. They also employed a protest technique known as “sitting on a man”, meaning to follow him, mocking and using song to draw attention to their cause.

In recent years, West African women’s involvement in politics, protests and social movements has also revealed some of the complex and changing dynamics around motherhood, gender and power. Temitope Oriola’s research on the role of women in ‘Nigeria’s oil insurgency’, for example, shows the vital role that older women play in resistance to the exploitation and pollution of the oil-producing areas. Women have been at the frontline of many struggles for peace in Liberia, workers’ rights, and to protect the environment. In all these movements’, women have mobilised their actual and symbolic roles as mothers, to lend legitimacy and urgency to their cause. In some ways, this role aligns with the concept of “womanism”, coined by Alice Walker to describe an expansive form of Black feminism. Walker’s term was taken up by both Clenora Hudson-Weems and Chikwenye Okonjo Ogunyemi, who developed more Africana-focused ideologies. Layli Maparyan has written perhaps the definitive account of womanism and defines it as a “love- and spirit-based worldview and transnational perspective, born of Black women’s historically situated struggle”. (The Womanist Idea, xix)