Read about the intriguing history of Chinese barefoot doctors in Tanzania in the 1960s and 70s: A prime example of South-South knowledge circulation.
© University of Basel
Prior to Tanzania’s independence, there had been no national rural healthcare system. After 1961, the government remained largely dependent on foreign assistance for staffing, medication and equipment for its health services.

The global shortage of qualified healthcare personnel as well as the long training periods made it difficult to form a comprehensive health system. In China, President Julius Nyerere became aware of the barefoot doctor scheme and eventually introduced it to Tanzania.

What are “Barefoot Doctors”?

In 1951, the Chinese central government decided basic healthcare should be provided by health workers in villages (‘village doctors’), since urban-trained doctors seldom settled in rural areas. The barefoot doctor scheme in the 1960s reformed medical education: In areas still without any doctors or medicine, villagers such as farmers or high school graduates could undergo short-term medical training – from three months to a year – before returning to their villages to farm and practice medicine. The term “barefoot doctors” refers to the – often barefoot – farmers working in the rice paddies.

This system brought many advantages. Barefoot doctors were paid collectively by the commune, thus reducing healthcare costs. They were trained to meet the villagers at eye level and to live and work with them. This would not only ensure rapid healthcare for the rural population, but also medical knowledge of treatment and prevention. Disadvantages to this system were that barefoot doctors were often poorly equipped, and with their limited training, were often unable to cure patients.

In 1985, China’s Ministry of Health stopped using the term “barefoot doctors” and implemented a new policy, allowing the qualification of ‘village doctors’ after passing an examination. Those unqualified could continue working as health workers in communities.

Although the discontinuation of the system ultimately led to a decline in rural health services, the scheme inspired the Alma-Ata conference (1978) and the Primary Health Care movement. 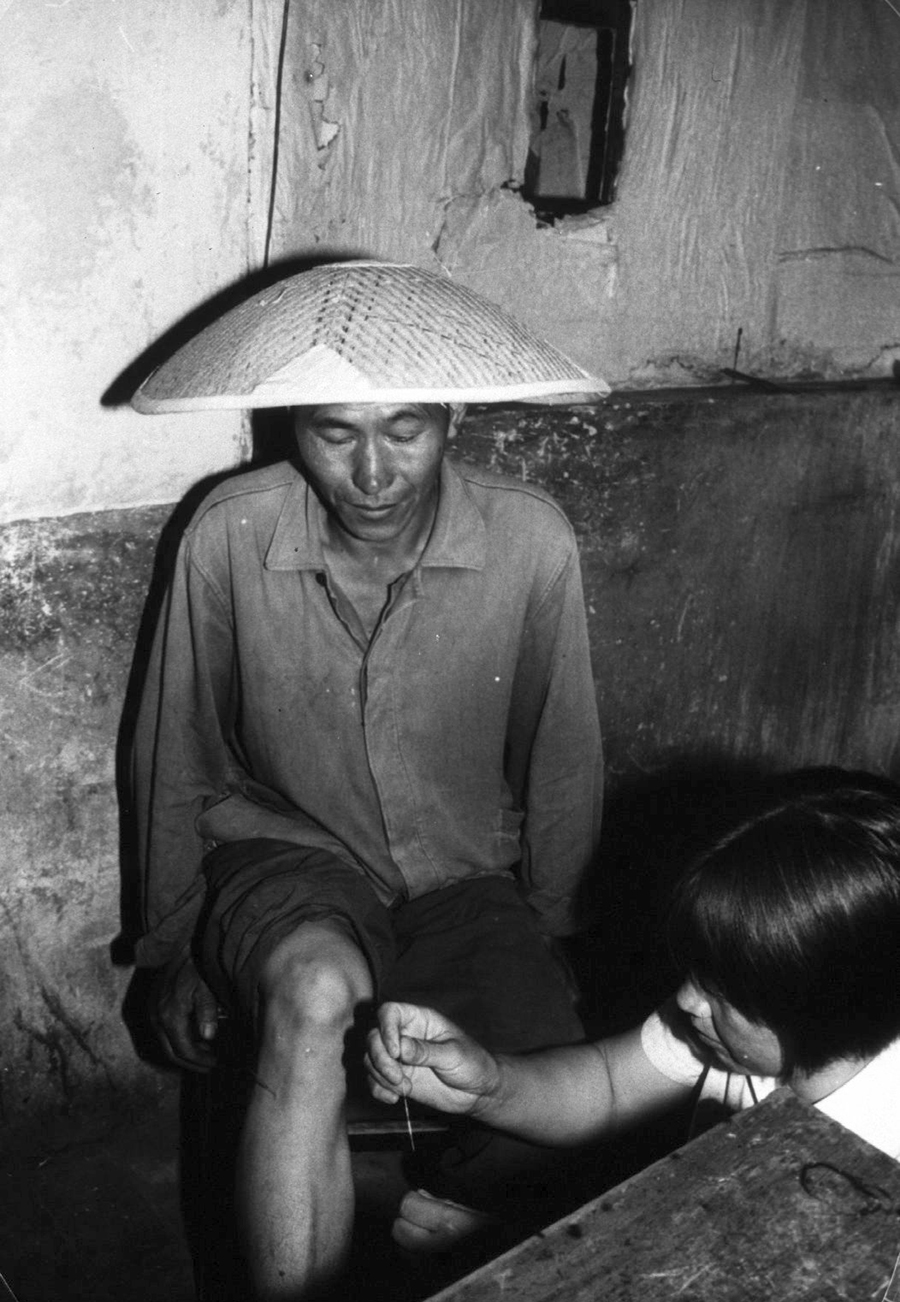 A Chinese barefoot doctor uses her needles to treat a production brigade worker (1979). 1

Barefoot doctors were first sent from Beijing to Zanzibar in 1964. As in China, they tended to the local rural population. Their perception of their role in a community was shaped by their education in China: flat medical hierarchies, reliability, diligence and sharing work as well as living conditions with the local rural population. The inhabitants of the islands Zanzibar and Pemba more easily accepted the Chinese doctors compared to the Soviets and East Germans.

Chinese aid also focused on promoting self-reliance: they established ‘preparation rooms’ to manufacture injections and thus reduce Zanzibar’s reliance on imported, mainly British, drugs. In 1968, Zanzibar’s first pharmaceutical workshop opened. However, little medical training to the locals was offered, but ‘training through demonstration’, including health education classes and disease prevention were practised instead.

On mainland Tanganyika, the first Chinese medical experts team arrived in 1968. Julius Nyerere was especially impressed with how temporary clinics were set up and farmers trained to assist medical workers in rural areas, while earning the same wage as the farmers. Nyerere developed a similar scheme for his Ujamaa-villages, where health workers were selected from the community that would also support them financially.

By 1972, eleven Chinese medical teams were present in different stations in Tanzania, from where they regularly paid visits to Ujamaa- and other villages and stayed there for up to a month to participate in village life and work alongside the villagers. In the absence of rural clinics, the Chinese doctors would improvise and operate from whatever facilities available. In other cases, they helped establish hospitals, rural health centres and dispensaries, and through their regular visits and assistance “boost morale” in the rural healthcare system.

While in the villages, they conducted child welfare clinics, seminars, health demonstrations, vaccinations and treatments. Work ethics were taught by working alongside their Tanzanian counterparts, highlighting the value and results.

The Chinese barefoot doctor scheme seemed an option to develop Tanzania’s rural healthcare system. A medical-educational innovation was transferred from one Southern context to another and was then adapted to it.

There are calls today to reinstate this model because of the lack of highly trained personnel in low- and middle-income countries.

Altorfer-Ong A. They came as brothers, not masters: Chinese experts in Tanzania in the 1960s and 1970s. Journal für Entwicklungspolitik [Internet]. 2010 [cited 1 December 2021]; XXVI: 73-94. Available from: https://www.mattersburgerkreis.at/dl/mMKKJMJkLmJqx4KooJK/JEP-3-2010_UNFRIED_EntwicklungsexpertInnen.pdf#page=73