It is April 2, 2020. Akuto Konou’s WhatsApp shows this message from her friend Esther: “By the way, I do a daily average of 1.5 hours of gardening. I’ll show you tomorrow”. The next day, Akuto Konou receives many pictures from Esther. 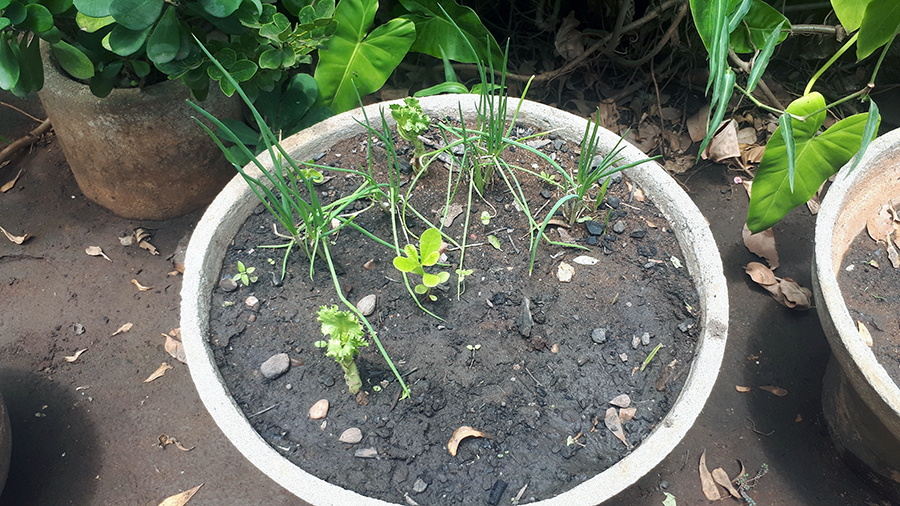 Pot with herbs and vegetables. Urban agriculture. (One of the photographs by Esther)

Esther lives in Hedzranawoe, a neighbourhood near the city centre of Lomé, the capital of Togo. Her photos show pots with the herbs and vegetables she has planted. The young urban farmer, worried about the uncertainties of the COVID-19 crisis, adds: “What would we do if, while in the city, we could no longer go out to buy food, or could no longer even find food to buy at the market? This is what led me to start my own garden. I am also thinking of a small fish or poultry farm”.

As this anecdote illustrates, agriculture in urban areas is an activity that is practised more and more in Africa. In the previous step, we saw how traditions from rural areas have been extended to urban areas. In this one, we look at urban agriculture, one of these practices.

Food security as the primary goal of urban agriculture?

Food security, according to the United Nations, is the condition of “people having at all times, physical, social and economic access to sufficient, safe and nutritious food which meets their dietary needs and food preferences for an active and healthy life”.

Africa has a large low-income population and is a territory where urbanisation’s pace is racing. In fact, according to the United Nations, by 2050 the global urban population will increase by more than 66%, and at least 90% will live in Asia and Africa. Such rapid growth coupled with limited planning and investment capacity makes African cities favourable grounds for food insecurity.

Although urban agriculture has existed in Africa since the beginning of urban developments, these activities have been undervalued and resisted by planning officials until recently. Researchers note that colonial and post-colonial governments found urban agriculture to be counter to an ideology of civilised cities and therefore outlawed it.

What if urban agriculture contributed to a different kind of health?

The holistic definition of health is the state of being free from physical, emotional, social, spiritual, and intellectual illness or injury. Women in Africa are seen as playing an important role in society. Their well-being, in turn, has a positive effect on society. Their socio-economic independence is also part of the health of society. An empowered woman has the essential means necessary for her to participate fully in the socio-economic life of communities.

It is observed that more than 65% of urban agriculture practitioners in Africa are women, for instance in Lomé, as we have seen in Esther’s case. Therefore, wouldn’t other impacts, such as empowering urban women farmers, be one of the reasons why urban planners should integrate urban agriculture into urban planning documents?

There are, nevertheless, some drawbacks. Recent studies have pointed out that urban agriculture, depending on the conditions in which it is performed, poses risks such as malaria, air, water and soil pollution. Such risks, though, are related to the tools and infrastructures available to farmers, including their education. These risk factors could certainly be addressed if urban agriculture was better integrated into urban planning and governance.

It would be constructive to create an institutional and legal framework to promote and support urban agriculture and practitioners or plan specific areas with amenities where urban agriculture can be practised. Health issues could be monitored. The improvement of all these tools will provide better conditions for urban women farmers, and contribute to their social health, and thus to a better life for themselves and for society.