Mechanism of type I allergic reactions

In this article Andreas J. Bircher explains the mechanism of type I allergic reactions.
© University of Basel
The adaptive immune system is central in any immune defence, including allergic reactions. Before the body reacts to foreign intruders, it first has to encounter the antigen and identify it as potential danger. In allergies, the immune system produces an unnecessary, exaggerated defence reaction.

At the first allergen exposure, the patient may get sensitized. This step includes antigen presentation, the production of specific IgE antibodies, and their binding on mast cells or basophils. Allergic symptoms are only elicited if the sensitized patient is again exposed to the same allergen. 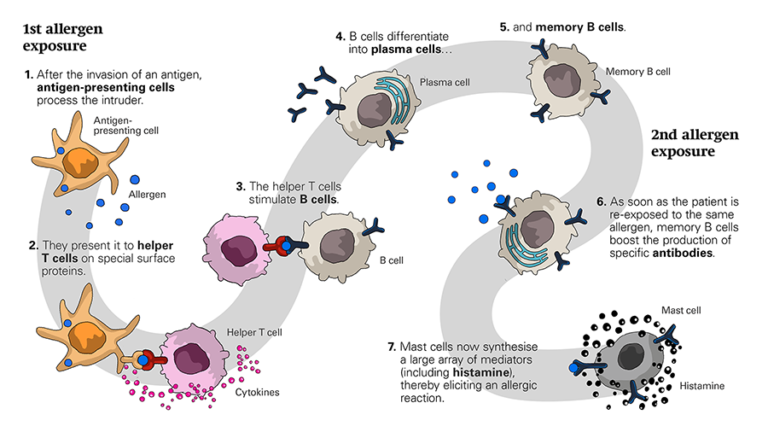 Sensitization takes about five to seven days and involves a number of complex steps, which are tightly regulated. But also damping or stopping the immune response, eg by T regulatory cells, is crucial. The immune system should not start to produce antibodies against the body’s own cells or organs and it should know when to stop – otherwise severe damaging inflammation or autoimmune diseases could occur.

If the same allergen is encountered again, a specific immune response is triggered almost immediately. This process is much faster than the initial sensitization phase.