Everybody has experienced an insect sting before – but what if you are allergic? In this article Andreas J. Bircher explains what you can do about it.
© University of Basel
Local inflammatory reactions to stinging (eg bees and wasps), biting and blood-sucking insects (eg fleas, lice, and cockroaches) and acari (eg mites, ticks, and spiders) are very common. Typically, red and itchy or painful swellings appear within a few minutes to some hours.

Hymenoptera (ie bees and wasps) stings are the most frequent cause of severe allergic reactions. Other hymenoptera species (ie hornets and bumblebees) are rare elicitors. Bees typically sting humans once, because they lose their stinger and venom sack when pulling back. A wasp will not lose its stinger and can attack repeatedly. Normally, toxins in bee and wasp venoms cause local redness, swelling and pain, which will last for several days. This is an expected inflammatory response to a bee or wasp sting, although increased IgG antibodies to the respective venoms can be measured. 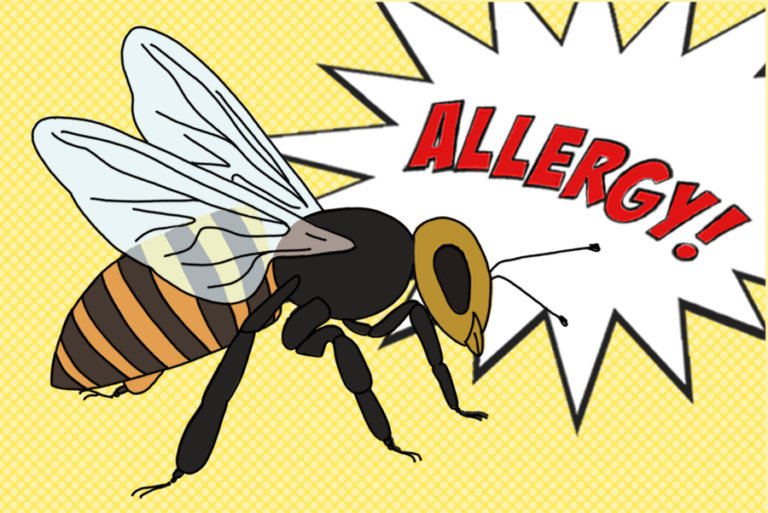 Bee stings can be an elicitor for an allergy.

Allergens in hymenoptera venoms include enzymes (ie phospholipases) and other proteins (ie antigen 5 in wasp and melittin in bee venoms). Cross-reactivity between wasp and bee venom may exist, however, it is rarely clinically relevant. As atopic allergies, hymenoptera allergy belongs to the IgE-mediated immediate type (type I) reactions, however, no genetic background (ie atopy) is required to get sensitized.

If the patient has been sensitized to insect venom allergens, his mast cells will rapidly get activated upon re-exposure. This may cause symptoms in several organs including the skin, the gastrointestinal tract, or the respiratory and cardiovascular systems. While some patients only show urticaria, others may develop anaphylaxis or even experience a severe anaphylactic shock. Different severity grading systems have been proposed. Higher risks for more severe reactions are associated with older age, pre-existing heart disease or severe asthma, the intake of certain drugs (eg some medications to treat hypertension) as well as patients with an increased number of mast cells (ie mastocytosis).

In severe reactions, desensitization or immunotherapy with insect venoms is a highly effective preventive treatment. For best results, the therapy has to be continued during several years and with high doses. Desensitization is usually well tolerated. However, it may rarely elicit an allergic reaction. The patient has to be supervised accordingly after the injections.

Let’s now have a look at the case of a 60-year old farmer who was attacked by a wasp swarm while working in the fields. He got stung in the left hand, the right leg as well as the neck. Previous bee and wasp stings had usually resulted in local swellings that lasted for about two days. This time, however, within 5 minutes, he started to feel dizzy and experienced hot flushes and a generalized itch, particularly in his hands and feet. He walked back to the farmhouse, where he met his wife who attested later that his whole face was red and swollen. Suddenly, he got nausea, started to vomit, and collapsed. His wife called an ambulance. His blood pressure was low (70/30 mmHg [the blood pressure is measured in millimeters of mercury]; normal approx.130/80 mmHg) and his pulse rate was increased (105 beats/minute; normal approx. 60 beats/minute). He was immediately treated and taken to the hospital for surveillance.

There, mast cell tryptase (ie an enzyme secreted by mast cells and used to measure mast cell activation) levels were shown to be elevated (40 µg/ml; normal below 11.3 µg/ml). He was kept under surveillance over night. He was prescribed an emergency medication tablet set and an adrenaline autoinjector. A later allergy work-up showed the following results. Intradermal skin tests were positive for wasp venom. Blood tests have shown that specific IgE antibody levels to wasp venom were elevated (20 kU/l; normal below 0.35 kU/l) and a basophil activation test with wasp venom was strongly positive. Specific IgE are measured in kilounits (kU) per liter. 1 kU corresponds to approximately 2.4 nanograms, a very minute amount. The measuring range lies between <0.35 kU/l (not measurable) to > 100 kU/l (very high levels). The same tests with bee venom were negative. Baseline mast cell tryptase was 5.0 µg/ml (normal value).

An allergic grade III reaction due to IgE-sensitization to wasp venom was diagnosed. The allergist recommended to start desensitization with wasp venom and prescribed him emergency medication including an adrenaline autoinjector, antihistamine and cortisone tablets.