In this article Andreas J. Bircher will introduce you to food allergies and factors that could aggravate them with the help of real case examples.
© University of Basel
Plant-based allergens include fruits, nuts, kernels, seeds, vegetables, grains, and spices. Animal-based allergens encompass milk, egg, fish, crustaceans, poultry, and rarely meat.

Sensitization frequencies vary with type of food and the individual’s age: milk and egg allergies are more common in children, while fruits, vegetables, fish, and crustacean allergies occur more frequently in adults. Severity of allergic reactions depend on the stability of allergens to cooking and digestion. Cross-reactivity with some respiratory allergens can occur. Additional factors, including exercise, alcohol, and some medications, may aggravate food allergy symptoms. An atopic background is frequent but not a necessity in the development of food allergies.

Plant-derived food: Common food allergens are fruits of the Rosaceae family including apples, peaches, cherries, and almonds. Cross-reactivities to pollen (eg birch) are frequent. The heat-labile allergens (PR-10 proteins and profilins) are degraded by cooking or through acidity in the stomach and consequently rarely cause systemic symptoms. Other plant-derived allergens that are heat- and acid-resistant (lipid transfer and storage proteins, LTPs) occur in nuts (ie cashew and hazelnut), seeds (eg sesame and pine), legumes (eg peanuts and soy), vegetables (eg celery), and grains (eg wheat and corn flour).

Animal-derived food: Animal-derived food allergens include eggs, cow’s milk, seafood (eg fish, shrimps and mussels), and, more rarely, poultry and red meat (eg chicken and pork or beef). Allergens encompass various proteins – albumins or tropomyosins are common examples. In red meat, the carbohydrate galactose-alpha-1,3 galactose (alpha-Gal) is a rare but important elicitor. Most of these allergens are heat stable and acid resistant and are therefore more likely to cause systemic symptoms.

Food allergies mediated by IgE antibodies may result in local to severe systemic allergic symptoms. The symptoms depend on the food type and on how resistant the food is to increasing temperature (cooking) or acidity (ie decreasing pH). Easily degradable foods (heat and acid-sensitive), eg raw fruits and some vegetables, often cause local symptoms, while more resistant foods (eg roasted peanuts and shrimps) are likely to cause systemic symptoms. Some cofactors may aggravate the symptoms of food allergies, particularly to wheat, nuts, and shellfish. These include stress, exercise, high or low temperature, or concurrent intake of alcohol or some drugs (eg aspirin or some medications to treat hypertension). This condition, requiring several factors, is called food-dependent exercise-induced anaphylaxis or FDEIA. 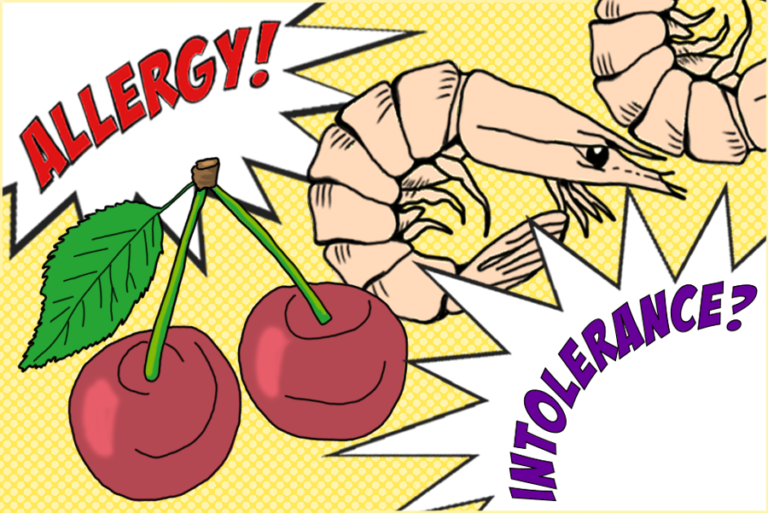 Food intolerances are more common. They frequently occur when eating carbohydrates (eg lactose or fructose). Food intolerances are not triggered by an immune reaction. For example, the common lactose intolerance in adults is caused by an acquired deficiency of the enzyme lactase in the gut. Ingested lactose is consequently digested by intestinal bacteria. The thereby generated water and gas lead to indigestion, nausea, bloating, pain, and diarrhoea. There is a close dose-response relationship: the higher the dose, the more severe the symptoms. Although impacting on quality of life, life-threatening reactions do not occur in these food intolerances.

Let’s now consider the case of a 21-year-old man who ate various foods from a buffet and drank several beers at a Chinese restaurant. While eating, his palms and soles turned itchy, he began to sweat, and had colics. He then had sudden diarrhoea and collapsed. He was brought to the hospital, where disseminated wheals were observed and low blood pressure was measured. Anti-allergic therapy abolished his symptoms. He has never had any previous allergic symptoms. His older brother had hay fever. Skin tests were positive for house dust mites and shrimps. Specific IgE blood tests were positive for the house dust mite of the species Dermatophagoides pteronyssinus, shrimps, and the muscle protein tropomyosin.