In this article Andreas J. Bircher will introduce you to contact allergies with the help of a girl getting a black henna tattoo.
© University of Basel
Welcome back! We are happy that you will join the third and last week of this course. In this week you will get to know to more types of allergic reactions: contact dermatitis and drug hypersensitivity. At the end of this week you will also have the chance to assess yourself in a quiz to test what you have learned in the last couple of weeks. Also, you will be given the possibility to give feedback on the course.

Did you ever get a henna tattoo or dye your hair? Hopefully you did not experience an allergic reaction afterwards. What can happen as a result of a contact allergy will now be explained.

A 12-year-old girl went on vacation at the seaside with her family. At the beach, a booth offered temporary ‘black henna tattoos’ with a variety of motifs such as flowers, cartoon figures, and ornamental designs. The girl strongly desired such a tattoo and her parents agreed; three days before returning she had a nice black ornament drawn on her upper arm. 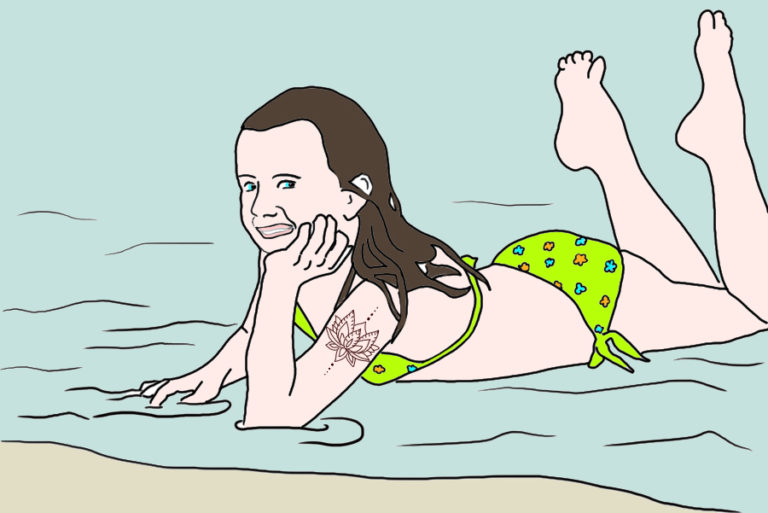 The girl with the henna tattoo.

Ten days later, after returning home, severe itch started at the tattoo site – the ornament started to get covered with redness, papules, vesicles, and oozing patches.

Allergic contact dermatitis to black henna was diagnosed by her pediatrician who started a treatment with strong topical corticosteroids. After three weeks, the black color had disappeared. After another week, the allergic dermatitis had subsided, leaving a hypo-pigmented outline of the ornament.

About four years later, at the age of 16, she intended to dye her hair for the first time. She bought black hair dye and applied it at home. The next day she woke up with a very itchy scalp, an oozing dermatitis of the head, and blistering along her front. Her eyelids were swollen and she could hardly see.

She consulted a dermatology clinic where an allergic contact dermatitis to hair dye, particularly para-phenylenediamine, was suspected and she was treated with oral prednisone. Later, patch tests revealed that she was sensitized to para-phenylenediamine and para-toluenediamine, which are both present in dark hair dyes. She received an allergy pass with the names and occurrences of these two substances.

In hair dyes para-phenylenediamine and para-toluenediamine are allowed in concentrations up to 1%, direct contact with skin should be avoided. In black henna tattoos its color is illegally enhanced with para-phenylenediamine in concentrations up to 20%. This high concentration strongly binds to the skin and results in a very brilliant and black tattoo that lasts for several weeks. Unfortunately, at the same time, about 1 to 2% of the exposed get sensitized and a delayed-type hypersensitivity develops, presenting with an allergic contact dermatitis. If patients forget the previous incident and are re-exposed later, eg with a new henna tattoo or by hair dyes containing para-phenylenediamine, they again will suffer from a severe allergic contact dermatitis now within 1 to 2 days. Sensitization will persist life-long and may lead to occupational problems in hairdressers and cosmeticians.