Mechanisms and manifestations of drug hypersensitivities

In this article Andreas J. Bircher shows the complexity of hypersensitivities and explains how to differentiate between different drug allergies.
© University of Basel
Drug hypersensitivities are the biggest challenges in clinical allergology, since the various drug molecules may cause non-immunological reactions as well as different types of allergic reactions.

Adverse drug reactions are common. These reactions encompass any severity grade from mild temporary signs and symptoms to life-threatening incidents. In 1972, the WHO has coined the following general definition of an adverse drug reaction: ‘a response to a drug which is noxious and unintended, and which occurs at doses normally used in man for the prophylaxis, diagnosis, or therapy of disease, or for the modification of physiological function.’

Drug hypersensitivity reactions are among the most complex phenomena in clinical allergology. In atopic allergy (eg hay fever), mainly proteins from respiratory allergens or food are causing IgE-mediated reactions. In contact allergy, mostly chemical haptens are causing a T cell mediated delayed type hypersensitivity reaction. Drugs, on the other hand, are very heterogeneous. They include mostly haptens (eg antibiotics and pain medications), hormones (eg corticosteroids), as well as proteins (eg insulin and biological drugs). A particular drug class may induce only T cell mediated reactions (eg anticonvulsants) resulting in mild to very severe exanthema. Another drug class (eg nonsteroidal anti-inflammatory drugs, NSAIDs) typically elicits immediate-type-like symptoms, including anaphylaxis through pseudoallergic mechanisms. Others, such as penicillin, may induce hypersensitivity reactions through all four types, according to Coombs and Gell.

A detailed classification distinguishing five adverse drug reaction types was suggested by Edwards and Aronson (2000) in the Lancet. Type A reactions are by far the most common: up to 80% belong to group A reactions, whereas type B reactions make up roughly 15 to 20%. The remaining three forms are rare. Type A reactions are caused by direct pharmacologic effects (eg drug interactions or decreased metabolism) of a particular drug on the organism. Any drug, if not correctly dosed, may cause a type A reaction. Type B or drug hypersensitivity reactions encompass specific immune mechanisms (ie drug allergies in a narrower sense) or pseudoallergic mechanisms. In allergic reactions type B reactions mostly involve sensitization and elicitation of a specific immune mechanism – either mediated by specific IgE antibodies (type I according to Coombs and Gell), specific T cells (type IV according to Coombs and Gell), and rarely specific IgG antibodies (types II and III according to Coombs and Gell).

However, in many drug hypersensitivities, non-immunologic, pseudoallergic mechanisms are involved. Indeed, some drugs may directly involve pro-inflammatory cascades (eg the arachidonic acid cascade or the kinin system) without any detectable specific immune mechanism. In a given patient usually just one mechanism and manifestation to one molecule is present – remember the immune system is efficient but also highly specific. 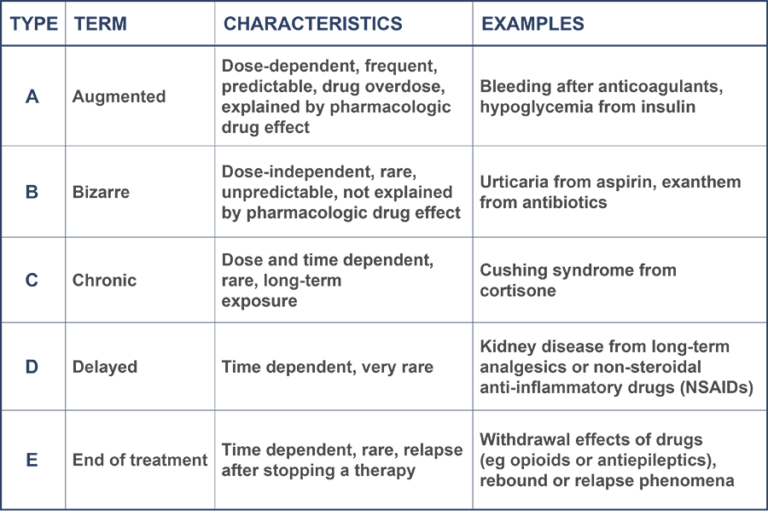 Clinical manifestations include all forms of skin disease: angioedema, urticaria, allergic contact dermatitis and macular, papular, pustular, and bullous exanthems or rashes. Aphthae and inflammation may occur in the oral cavity. Systemic syndromes may include an anaphylactic shock and reactions termed ‘severe cutaneous adverse reactions’ – or short SCARs. Constitutional symptoms, such as fatigue, fever and general sickness, are present in more severe forms. Last but not least, affection of the liver, kidney, the lung, or blood cells may occur in severe drug hypersensitivities. In the Continuing Medical Education CME article ‘Drug Hypersensitivity’ by Böhm et al. (2018) you will find further important information on these topics.

We have now recognized why drug hypersensitivities are the most challenging issue in allergology: different drugs may cause manifold clinical manifestations through highly heterogeneous mechanisms. For a correct diagnosis, it is therefore of utmost importance to describe the clinical manifestations as detailed as possible. In addition, the time frames are helpful to distinguish immediate from delayed reactions and newly occurring sensitizations from preexisting hypersensitivities. To illustrate the complexity of drug hypersensitivity reactions, we will now look into two particular case studies.

But before continuing, can you think of anybody with a potential drug allergy? What are the clinical manifestations? Feel free to discuss this question below.