In this article, we talk about different models of ageing across different fieldsites, from traditional to non-traditional.

As you would find from browsing the Cultural Context of Aging book mentioned in the last step, every society will have its own traditions of ageing. While this may not apply in all cases, we would suggest that most societies have developed cultural categories so that when people reach a certain age, they were also viewed as entering into a separate and recognised stage of life that might be called something like the ‘elders’ or the ‘seniors’.

By and large, the description above still applies to our Palestinian field site of Dar al-Hawa, a community of about 13,000 people in al-Quds (East Jerusalem). The Palestinian population tended to shift to wearing different clothes and adopting other signs of belonging to a more senior segment of the population. This might happen when they were relatively young, about 50 or even under. Usually, women will then wear a long dress in dark colours. Much of the ethnographic fieldwork carried out by our researchers Laila Abed Rabho and Maya de Vries took place in what was called The Golden Age Club, where such older people frequently came together to socialise and take various courses, including one on how to learn to use smartphones, taught by Maya. People have a strong sense of what they call the ‘Circle of life’, which is also related to their faith as Muslims. In the circle of life, there is an established fourth stage which is called Sheikhuha (شيخوخة in Arabic). This designates seniority, especially if someone can be termed a Sheikh in recognition of their extensive knowledge and life experience. The idea of the ‘circle of life’ is further explained in the blog post linked below, written by Maya and Laila.

One reason why this was the norm in so many societies was that, historically, and for many still today, most knowledge of any importance is directly related to experience. Someone who has farmed for decades develops skills that would need to be taught to someone who is just starting to farm. People generally became more knowledgeable and more skilled over time. By contrast, there are many regions today where farming has declined and there has been a rapid increase in digital technologies, which tend to be first employed by and therefore better understood by the young.

Models of ageing with digital add-ons

In most cases, people might want to retain certain ‘traditional’ categories of ageing while embracing new technologies. An example of this is the concept of the nonna or grandmother, in Italy. In popular culture, particularly outside of Italy, nonna has become a kind of idiom signifying various gendered idealisations associated with local traditions, homeliness, cooking the family recipes and caregiving. The figure of the nonna has also been used in advertising, for example, as a marker of ‘authentic Italy’.

An important role played by grandmothers in Italy today is their active involvement in childcare, providing practical, economic and social support to families. This requires quite a lot of organisation, which can be facilitated by technologies such as the smartphone. As you will see in the short film below, from Shireen Walton’s field site in Milan, the contemporary nonna may therefore both retain various associations of being a nonna while simultaneously updating these and embracing the new capacities they have discovered in their smartphones.

In several of the field sites, such as the Dublin region in Ireland, there has been still more radical change in the experience of ageing. People generally expected to become ‘old’ perhaps when they reached the age of 60, 70 or 80, but this did not happen in the way that they imagined. Instead, they just felt a sense of continuity right from when they were young. As the cultural category of being a senior or being elderly is becoming less relevant to many, the factor that now marks a change in someone’s status as they age tends to be that of developing significant frailty, which could be physical but could also be linked to declining cognitive functions, such as the onset of dementia.

The graphic below shows a spectrum of different models of ageing across the three fieldsites discussed above: al-Quds, where more ‘traditional’ models of ageing with associated changes in behaviour and even clothing are still prevalent, Milan in Italy, where more traditional models of ageing such as the Italian grandmother (nonna) integrate digital practices into her daily life, and ‘newer’ versions of ageing, such as in Ireland, where the changes that occur in terms of behaviour and appearance are less significant. In practice, these are not distinct, as most people are comfortable combining them. A person in Japan might wear traditional clothing but want to see their grandchildren on Instagram, for example. 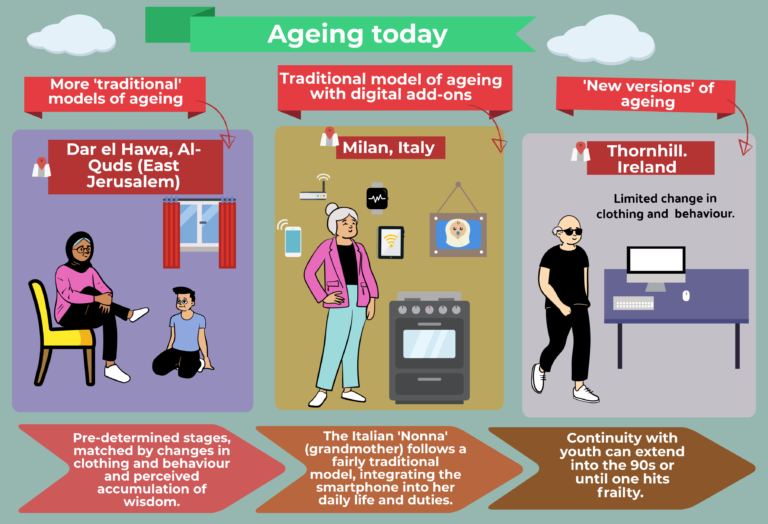