How to teach smartphone use

In this video, we talk about some of the difficulties older people experience when learning how to use smartphones.

In our fieldsites in Brazil, Chile, Ireland, and al-Quds, team members spent some time teaching smartphone classes to older people. It was the ideal way to understand why they may struggle to perform particular tasks. We created a short film that discusses this, which you can watch above.

The film you have just watched indicates a series of different issues that have to be taken into account when considering smartphone uptake among older people.

On the one hand, there may be physical issues, such as the difficulty in distinguishing between a long press and a tap, which users with conditions such as arthritis, might find difficult.

Then, there can be intergenerational issues, such as younger family members being impatient teachers, which we will discuss in a later step.

Older people may have a different idea about how one should learn, preferring to work in a step-by-step manner, following written instructions on pen and paper.

There are also issues of stigma, low self-esteem and uncertainty – having to learn how to use a device that other people say is user-friendly and knowing that their demographic may be perceived by others as not being in touch with technology.

There is also a sense that soon, there will be more digitalised commercial and non-commercial services (such as bill payments and government forms), and this is a chance many will have to prepare for.

The cartoon below highlights challenges that can come with learning how to use a smartphone, based on findings from Alfonso Otaegui’s work in Chile – this was scripted by Laura Haapio-Kirk and Georgiana Murariu and illustrated by artist John Cei Douglas: 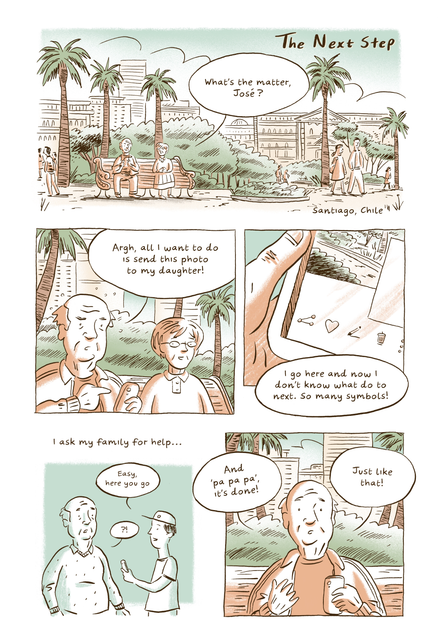 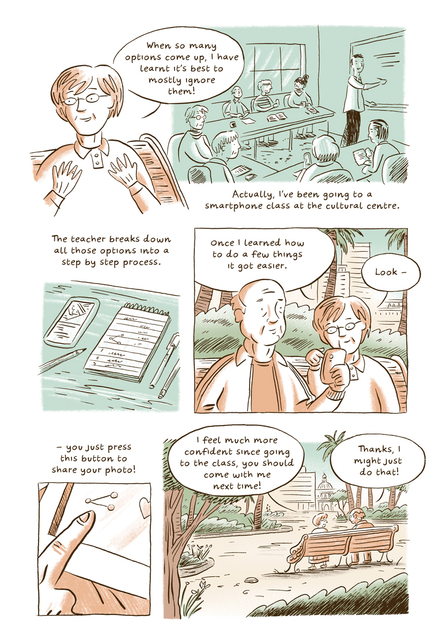 Smartphone usage across the world

As a previous step pointed out, older people in China may identify with smartphones in a way that would not be true of most other regions.

In China, as well as learning from their peers and family people often learn smartphone use by attending classes found in most neighbourhoods, which are provided by the workers’ organisations that will also have likely allocated them their residential accommodation within that area.

In addition to issues of cost are those of Accessibility. One of our researchers and authors, Laila Abed-Rabho, is blind and makes considerable use of her iPhone’s screen reader. Screen readers enable many visually impaired people to use devices on a daily basis.

But as Laila has found, they also slowly read out a lot of information about what exactly is on the screen, including both text and non-text elements, which can become quite tiresome.

Generally, though, they are doing an increasingly good job and Laila is quite clear that now she would not want to be without this resource.

The wider context of smartphone use

The problem is not just the mechanics of the smartphone. Learning is as much about the wider context of smartphone use.

In their book Digital skills: unlocking the information society (2014), Jan van Dijk and Alexander van Deursen suggest there are 6 levels of skills that are required to develop digital literacy, as follows:

1) Operational skills, such as how to use a particular button,

2) Formal skills, such as the ability to understand and use aspects of the interface, such as menu structures or hyperlinks,

3) Information skills, such as how to look things up,

4) Communication skills, such as the use of social media,

5) Content creation, such as one’s own playlists for music streaming,

6) Strategic skills, such as how to use smartphones for personal or professional goals.

Even if people master some of these levels, the difficulties that remain may contribute to what in the next step is called a new digital divide.

There is another short film linked below, which shows Valeria, one of Alfonso’s research participants, who talks more personally about her experience of learning to use the smartphone.

You can watch this if you want to gain a better sense of an individual’s personal experience.

If you’d like to learn more about smartphone communication, check out the full online course from UCL, below.