Visual conversation and care in Japan

What does the rise of the visual conversation mean for care arrangements and provision in Japan? We draw on Laura Haapio-Kirk's research to find out. 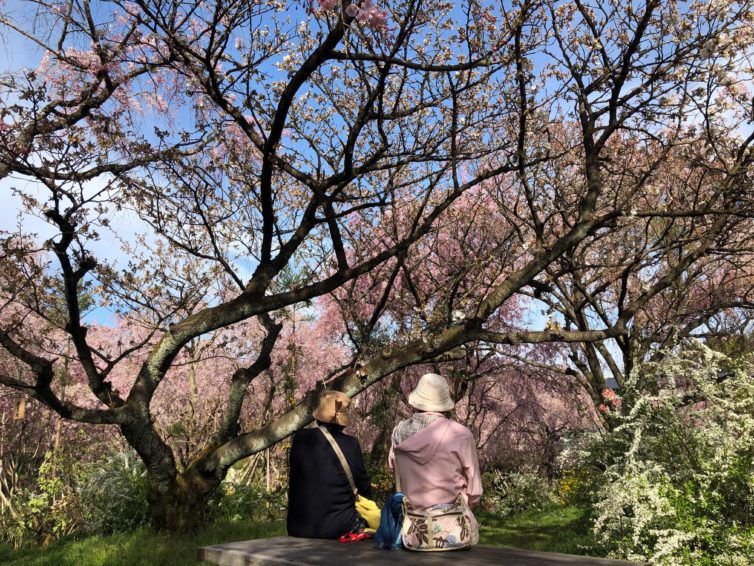 While there have always been visual elements to communication (think of facial expressions and body language), our notion of a conversation has historically been restricted to just two media: oral speech and written text. The rise of social media marked a profound shift, creating a capacity for visual digital conversation.

In some societies, the visual has always had a prominent role in more general communication, and it is not surprising that Japan, with its history of manga and heavy reliance on visual communication, was the birthplace of emoji and other forms of visual expression that are now part of global online conversation.

Japanese digital communication is dominated by the platform LINE, to a degree that some older people think of their smartphones as essentially a LINE device. During her research in Japan, Laura Haapio-Kirk found that when communicating through LINE, an important component was the use of stickers – essentially large-format emoji which are often sent as standalone messages. As of April 2019, approximately 4.7 million sticker sets are available on the LINE Sticker Store.

Many of Laura’s research participants discussed the way stickers are used in the demonstration of everyday care for others. Older people felt it helped them express feelings and sentiment quickly and easily and with less chance of making potentially embarrassing mistakes such as typos. In Japan, it is very important to maintain the right atmosphere in communication, avoiding awkward moments or tension. People felt that stickers allowed them to create the right tone in a context where body language and tone of voice were not possible.

You can see some examples of stickers like these in the photo below, which is taken from the LINE sticker store. Anpanman, one of the characters in the sticker set, is being presented as someone who can help one apologise or thank their friends. 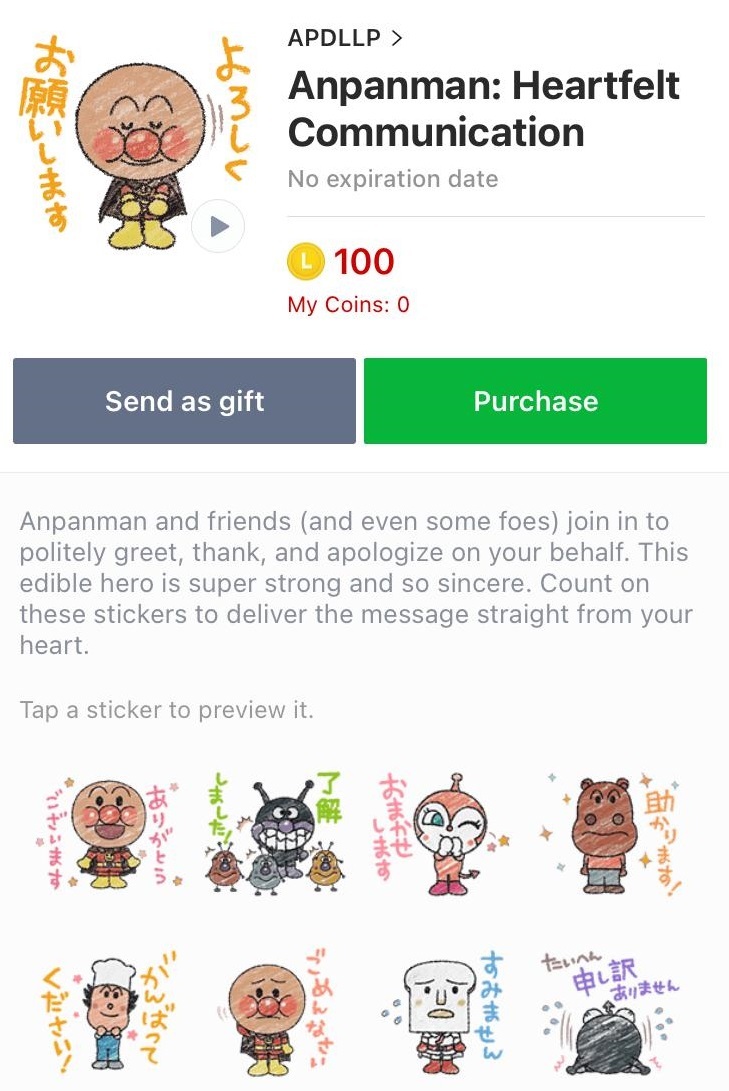 Maintaining closeness through the use of stickers

Many participants said that stickers allowed them to maintain daily closeness between family and friends living remotely. Stickers enable people to make their textual messaging ‘warmer’ and more fully expressive of their personalities and feelings than if they had to rely on digital text alone. This ‘warming up’ of communication became an important part of ‘care at a distance’, for example through the maintenance of regular contact with elderly parents who might be living in a different part of Japan. The daily flow of stickers and photos allowed people to send ‘meaningless things’, as one participant said, which were crucial for maintaining a caring connection that was more immediate and less burdensome than regular phone calls throughout the day. One research participant in her eighties communicated her daily activities to her daughter via a sticker set which she had downloaded. It featured a humorous grandmother character with whom she identified. She would send her daughter a sticker to let her know she was awake and to tell her what she was up to.

You can see examples of these stickers in the photo below, which was taken from the LINE sticker store (created by Ushiromae). 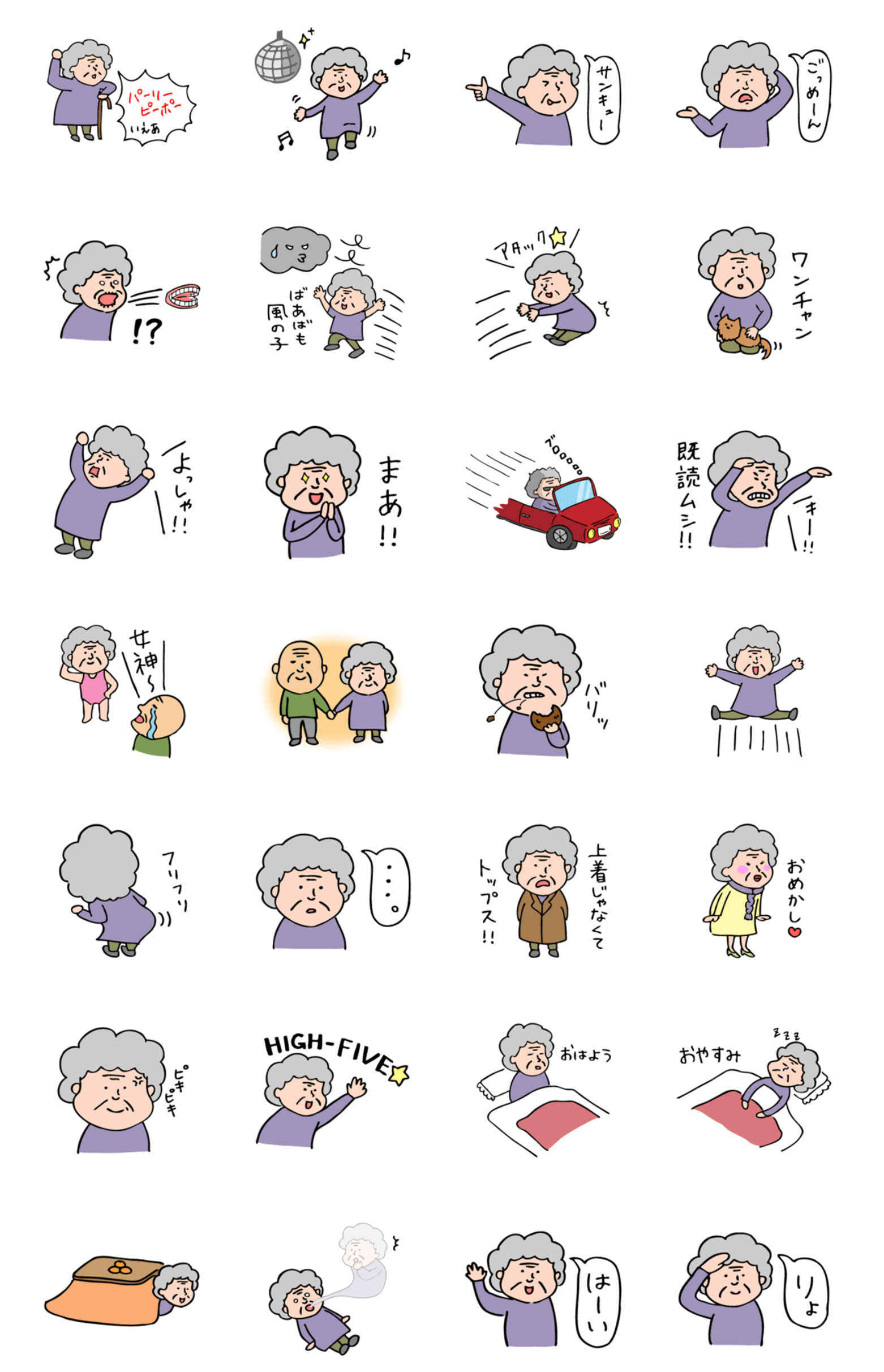 In Kōchi Prefecture, southwest Japan, which was Laura’s second fieldsite, physical stickers were used by local health authorities as part of a health ‘passport’ scheme to reward people for adopting healthy lifestyles. Recently, the prefecture’s health authorities had launched an app that extended the reach of the health passport beyond attending gyms and health checks, by including step counting and blood pressure monitoring as ‘health activities’. However, the app was not very frequently used among the mostly elderly population in this rural field site. Using what she had learnt from her ethnography, Laura collaborated with the local welfare office and two Japanese researchers from Osaka University to devise their own mHealth intervention for this rural population, who also face issues of isolation.

In the photo below, you can see an example of this passport and what it looks like in its analogue form, as well as its digital form. 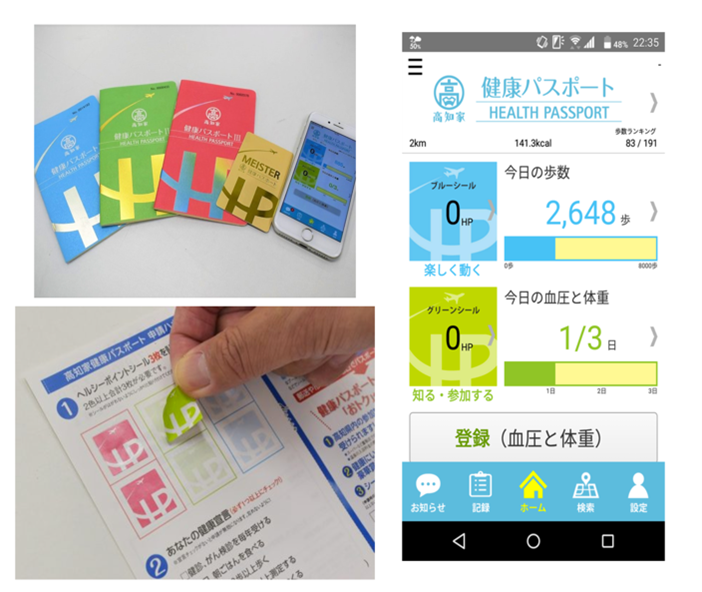 This intervention was based on the messaging app LINE, rather than a specialist mHealth app. In addition, the initiative was designed as a social intervention where people shared and discussed matters on LINE, rather than as an individual exercise. Finally, these conversations were framed around a topic that local people love to discuss anyway: homegrown produce and cooking. The idea was to help more elderly participants, who could easily become isolated in this region of rural depopulation, learn to use their smartphones to create a convivial and social grouping based on an activity related to health. The app proved successful amongst the participants and they were still using the group chat a year after the ‘experiment’ had been completed.

In the photo below, you can see an example of a conversation participants might have. 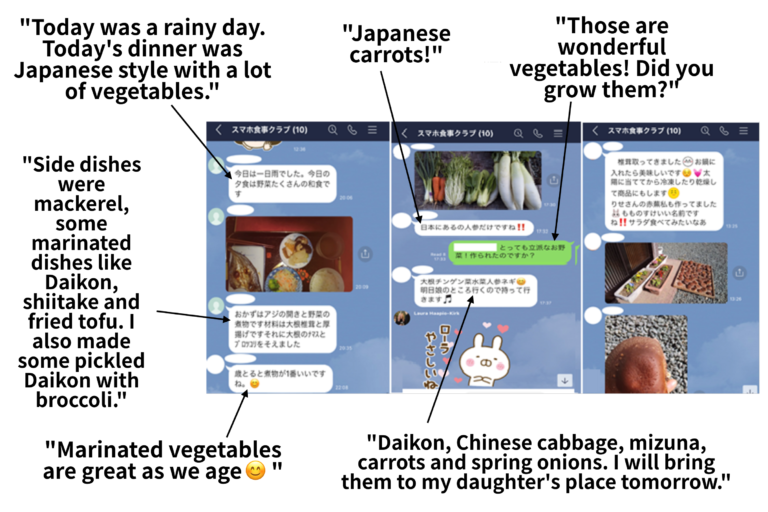