Power of the zine

Why did fanzines and punk go together? Professor Matt Worley discusses why fanzines were the perfect communication medium for punk culture. 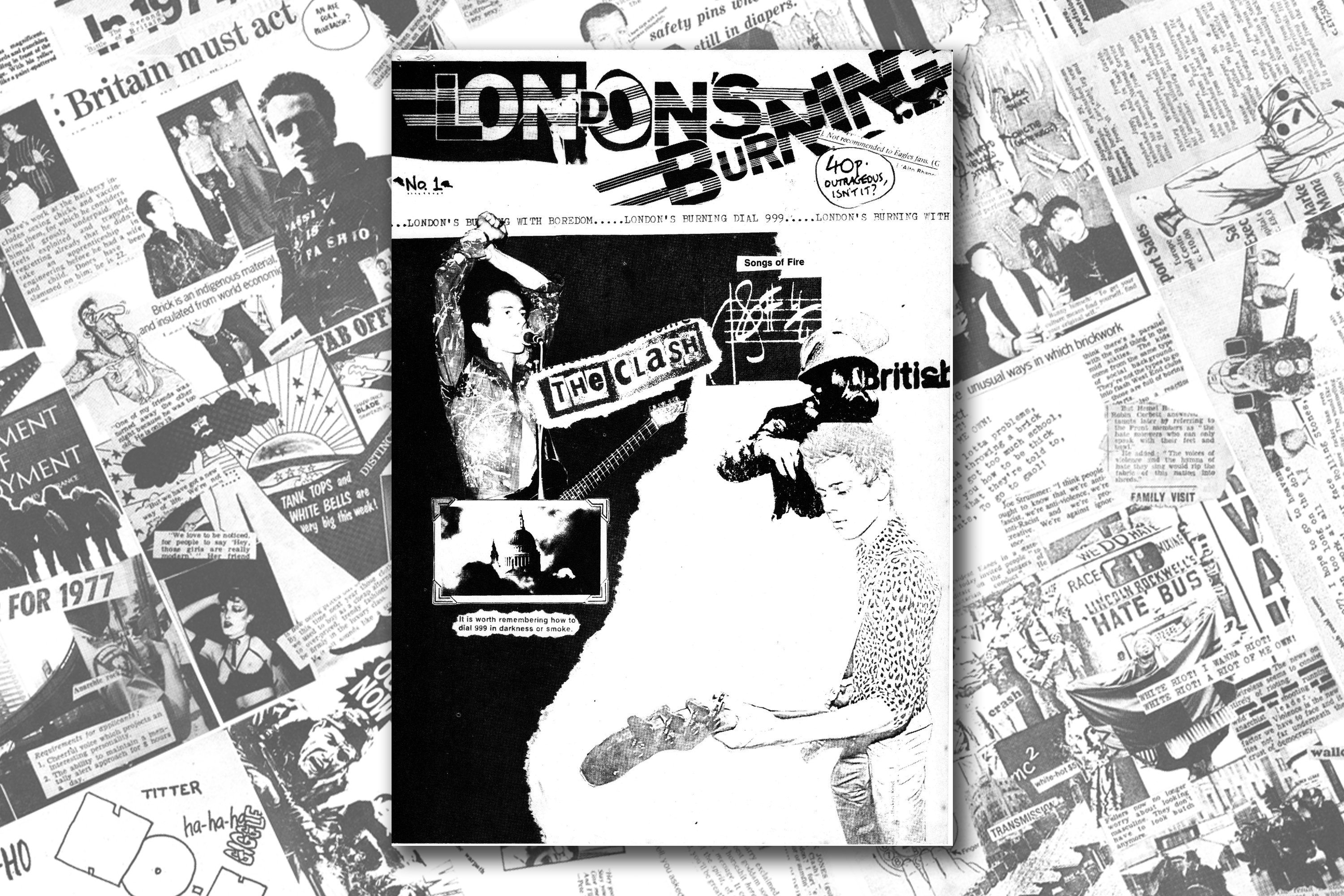 As we’ve already seen, Punk did not ‘invent’ the fanzine; its history may be traced back to Sci-Fi enthusiasts in the mid-century via detours into poetry magazines and the countercultural press. You can locate punk’s fanzines within a long lineage of independent publishing stretching right back to the radical pamphlets scattered across England’s Glorious Revolution in 1688. Or, perhaps, tie them to a history of women’s and feminist publications that looks back pre-1976 but also forward to Riot Grrrl and femizines.

Nevertheless, punk rejuvenated and invigorated the fanzine – adopting its DIY method as a medium to complement the noise, aesthetic and attitude; injecting fervour and irreverence into a media (medium?) that was often fastidious and dry.

Mark Perry’s Sniffin’ Glue was the first British punk fanzine. Produced in July 1976, it comprised a mix of typed text and marker-pen scrawl. 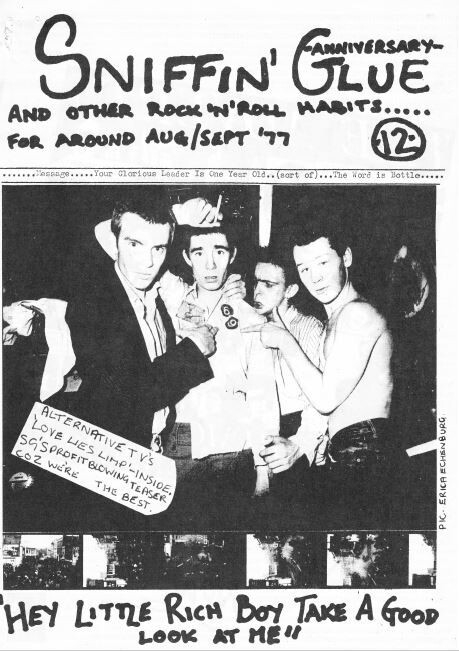 The music press was renounced for being out of touch; punk was celebrated as a youthful return to basics. The ‘design’ of Sniffin’ Glue looked impetuous and immediate; no regard was given to grammar or spelling. The focus was on the now, capturing punk at the moment of formation. A call to action was both implicit and explicit: Sniffin’ Glue invited its readers to participate and make their own media, the ramshackle, photo-copied nature of the fanzine revealing that anyone could do it. In its wake came countless titles: Bondage, Kid’s Stuff, JOLT, London’s Outrage, Panache, Shy Talk, Sideburns, … Many didn’t last long, replaced in a seemingly endless stream of youthful ingenuity. By mid-1977, as punk’s influence spread, almost every town and city in Britain had a punk fanzine.

Fanzines were the perfect punk medium. Immediate, accessible and relatively easy to do. Paper, glue, a pen, staples and imagination were all that was needed to make a paste-up. Photocopiers were becoming more common, available through college or work or a friend’s work or a library. On the high street, a printshop – or a local community press – might teach how to turn a single copy into multiple copies.

Suddenly, a platform was available for creative impulses or just a semi-public diary to prove ‘I was there’: nights out at The Roxy captured in the afterglow (or speed-fuelled buzz) of experience. Fanzines enabled action and participation. They gave voice to teenage urges and anxieties. They provided an alternative to the music press: a medium for punk by punks.

Look inside and the content was similar from zine to zine. Very quickly, the aesthetic became codified: cut-up ‘blackmail’ or ‘ransom note’ lettering; editorials bemoaning apathy; record and gig reviews written speedily and instinctively; collages made from media headlines or pictures culled from the tabloids and music press. 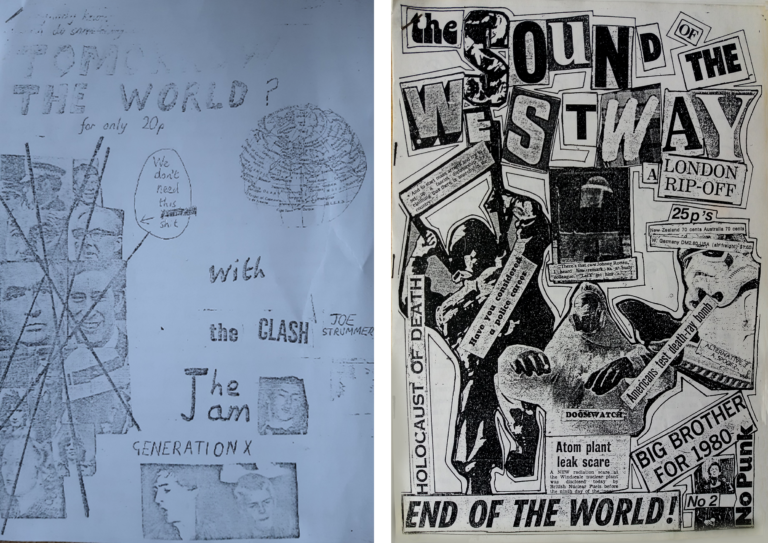 Yet innovation also flourished. The collages captured the tenor of the times. Rants, whether about the state of pop music or the state of nation, offered ready interpretation of punk’s meaning. Poems and artworks moved towards literary and artistic innovation. In Tony Moon’s Sideburns, a diagram displaying just three guitar chords and an instruction to ‘form a band’ distilled punk’s primary impetus in a way that has become iconic. 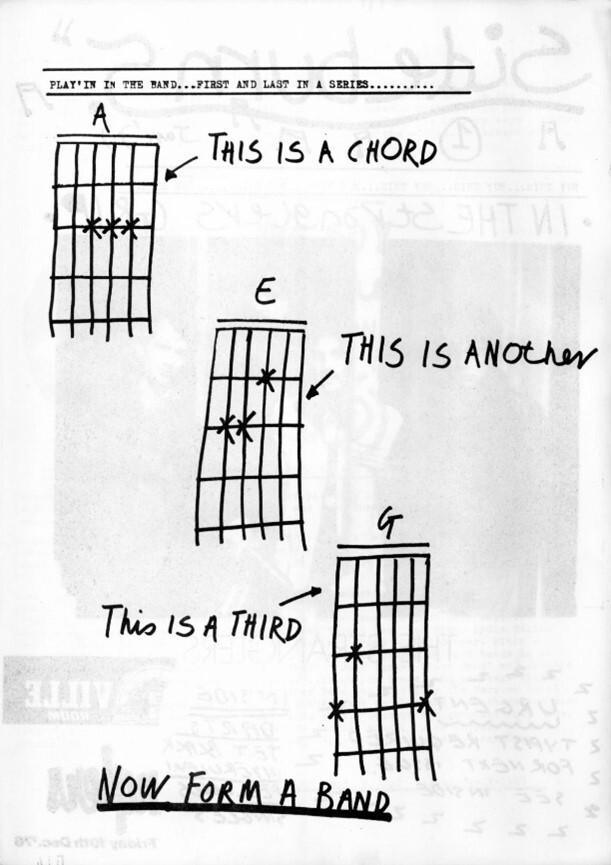 Taken altogether, fanzines were ephemeral, hapless, hopeless, inspirational and the embodiment of punk’s DIY ethos. Most importantly, they turned the passive punk listener into active participant.

Take a look at one of the zines in the downloads section below (London’s Burning and Sniffin’ Glue). Which do you like and why? Share your thoughts in the discussion area and remember to like suggestions made by others.