British punk was notable, early on at least, for the women involved in constructing and shaping the culture. 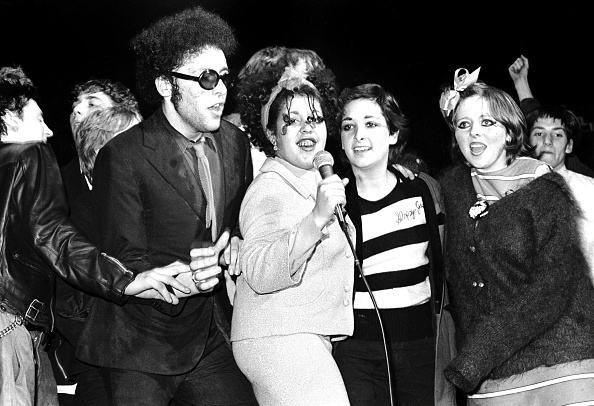 British punk was notable, early on at least, for the women involved in constructing and shaping the culture.

Vivienne Westwood’s partnership with Malcolm McLaren forged a style and an attitude that was first embodied by Jordan, who worked with them in SEX on London’s King’s Road. One of the Sex Pistols’ early followers was Siouxsie Sioux, whose band Siouxsie and the Banshees was to become one of the most iconic and uncompromising. The Slits would be heralded for their all-female line-up and, over time, musical innovation. Performers such as Poly Styrene (X-Ray Spex), Gaye Advert (The Adverts) and numerous others challenged the gender conventions of popular music. Cosey Fanni Tutti, as part of COUM Transmissions and Throbbing Gristle, shaped the formation of industrial culture and, crucially, generated artworks that foreshadowed the moral panic that would envelope the Sex Pistols later in 1976.

In the music press, Caroline Coon was the first writer to explain punk’s sociological meaning and importance, soon followed by Vivien Goldman and the more biting reportage of Julie Burchill and Jane Suck. Artists such as Linder Sterling (Ludus) and Gee Vaucher (Crass) provided designs for record sleeves that defined aspects of punk’s aesthetic. And photographers such as Jill Furmanovsky and Erica Echenberg captured the visual character of punk producing images that still today evoke punk’s early manifestation. Women were neither decorative nor cast as chanteuse. They opened up spaces through punk to challenge, confront and inject new – female – voices and performances into popular music.

Although some punk women rejected the label ‘feminist’, primarily because of the baggage and stereotypes attached to it, their very existence reimagined the possibilities and potential for women in music. Through their assertive sexuality and rejection of rock’s clichéd machismo, women delivered an active critique of both popular music and the wider media that framed it. In time, fanzine writers like Lucy Toothpaste (Jolt) and musicians such as Lesley Woods (Au Pairs) applied overtly feminist approaches to their work. The artist Linder Sterling – in her artwork and her band (Ludus) – engaged with how gender was constructed and commodified. The Raincoats began to imagine new musical forms that expressed their own particular femininities. 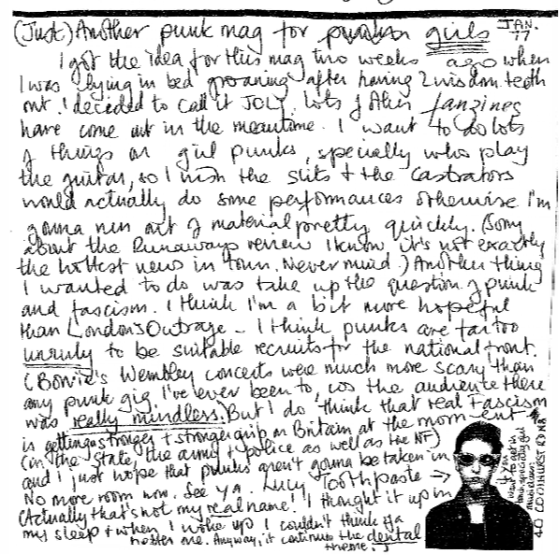 Perhaps predictably, male voices and performers soon dominated punk’s media presence. The best-selling and most well-known punk bands of 1976–78 were all male groups. But the challenge had been made and the possibilities presented. The emergence of Riot Grrrl in the 1990s provides testimony to punk’s legacy. Unquestionably, punk (and much that followed in the post-punk world) was shaped and defined by female pioneers becoming something that had never existed before.

Sex was exposed and used to provoke. Sexual imagery and fetishism had always informed punk’s clothing.  After the Sex Pistols, punk’s engagement with sex would flit between the crudely misogynist (Stranglers) and the charmingly naïve (Undertones). In the 1970s, however, as liberalisation and de-censorship meant sex became ever more visible, so punk looked to the extremes and brought back what it found there.

There were tensions and contradictions. When punk rocked, it sometimes fell back on cliches and stereotypes, such as The Clash imagining themselves as the last gang in town or The Stranglers’ songs of peaches, nubiles and London ladies. However, punk’s masculinities were also varied and served to subvert the traditional rock ‘n’ roller. Early on, Johnny Rotten seemed as vulnerable and brittle as he was sneering and seditious. Pete Shelley’s ambisexual lyrics for Buzzcocks were complemented by interviews discussing bisexuality and personal politics. The Roxy, one of the key early venues, was housed in a gay club (Chaguaramas) and the Sex Pistols’ audience was initially defined by the cross-sexual Bromley Contingent.

Punk, therefore, was informed by – and would inform – diverse sexualities. Those first attracted to the Sex Pistols came from a range of sexualities and the emphasis on doing-what-you-want-do and being-what-you-want-to-be ensured punk’s challenge was embraced by Queer activists and theorists into the 21st century. If Johnny Rotten dismissed sex as ‘two minutes and fifty seconds of squelching noises’, then for others punk opened spaces where sexual diversity was embraced and creatively realised.