Skip main navigation
Home / History / Ancient History / Archaeology: From Dig to Lab and Beyond / What is stable isotope analysis?

What is stable isotope analysis?

This article looks at what isotopes are, and how can they be used in archaeological analysis. Let's explore.
© University of Reading

Isotopes are atoms of the same element that have an equal number of protons and an unequal number of neutrons, giving them slightly different weights. They can be divided into two categories—radioactive and stable.

Radioactive isotopes (for example C-14) decay over time, a property which makes them very important tools for dating archaeological finds, soils or rocks.

Stable isotopes have a stable nucleus that does not decay. Their abundance, therefore, stays the same over time, which allows for many useful applications in archaeology (and other disciplines like ecology or forensic science).

Where can you find isotopes?

Isotopes are present everywhere in the world in which we live and breathe but the balance (or ratios) in which different isotopes of the same elements occur, varies between different substances (eg different types of food) and eco-systems (eg between land and sea or between different climate zones).

As we grow and, continually, as our tissues renew themselves, the isotopes that are in the food we eat and the water we drink are being incorporated into all our body tissues, including our skeleton.

By measuring the ratios of different isotopes in bones or teeth and using scientific knowledge about how they occur in nature to trace them back to the sources that they came from, archaeologists can find out many things about an individual, such as what their diet was like and the environment they grew up in.

There are many stable isotopes that are used by archaeologists, but the ones that are most widely analysed are:

Carbon and nitrogen stable isotope ratios are most often used to explore a wide range of questions surrounding diet (eg consumption of animal products or fish; weaning age), while the main application of oxygen and strontium isotope ratios is to reconstruct ancient migration (see Step 2.11).

In the 1980s scholars realised that different ratios of, carbon and nitrogen isotopes in human bones can provide information on the type of diet individuals consumed.

For example, carbon stable isotopes can distinguish between certain types of plants, so-called C3-plants, which make up the vast majority of land plants and C4-plants, which notably include maize. In the earliest applications of the isotope method, this was used to trace the introduction of farming (maize agriculture) in North America.

In Europe, where there were very few C4 plants in antiquity, carbon stable isotopes are mostly used to distinguish terrestrial from marine foods (fish and shellfish).

Combined with nitrogen isotopes ratios, which increase the higher an individual is on the food chain and can therefore give an indication of the number of animal products in the diet. Crucially, the method cannot distinguish between meat and dairy (see Figure 1).

Studies of eating habits of the past

For example, studies of our eating habits in the past have revealed that Neolithic populations consumed practically no fish, a very drastic change from the preceding Mesolithic, while high-status medieval Bishops consumed significantly more fish, associated with fasting than their congregation. 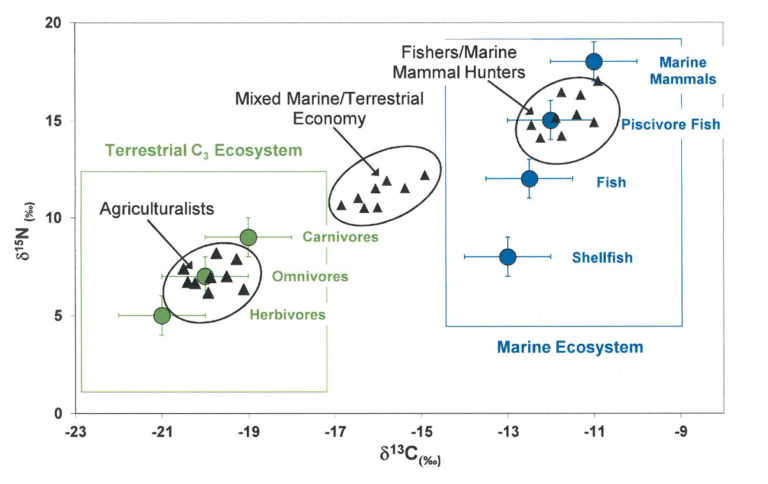 Weaning is a term to describe the gradual transition of a child’s diet from breast milk to solid food. The study of weaning age in past populations relies on the fact that stable isotope ratios of nitrogen and oxygen, will vary according to the ‘trophic’ level (or point on the food chain) of an individual.

Through breastfeeding, a child is effectively consuming its mother’s tissues, placing it higher on the food chain and increasing the nitrogen isotope ratios (or δ15N) in its own tissues.

When weaning begins and the mother’s milk is gradually replaced by other foods, tissue δ15N will decrease and fall in line with the values of the mother and other adults in that population.

Similarly, oxygen isotopes are taken up by the body from the water in the environment. When breastfeeding, a child consumes high levels of 18O, which drop gradually as water begins to be consumed from, isotopically ‘lighter’, sources.

Tracking levels of nitrogen and/or oxygen isotopes in teeth (relative to the age of the child when that tooth formed) helps us to determine the age at which the child was weaned off breast milk and on to solid foods.