In this case study by Donna Yates we will explore two stories about one ancient Maya vase. As you will see, context is key. 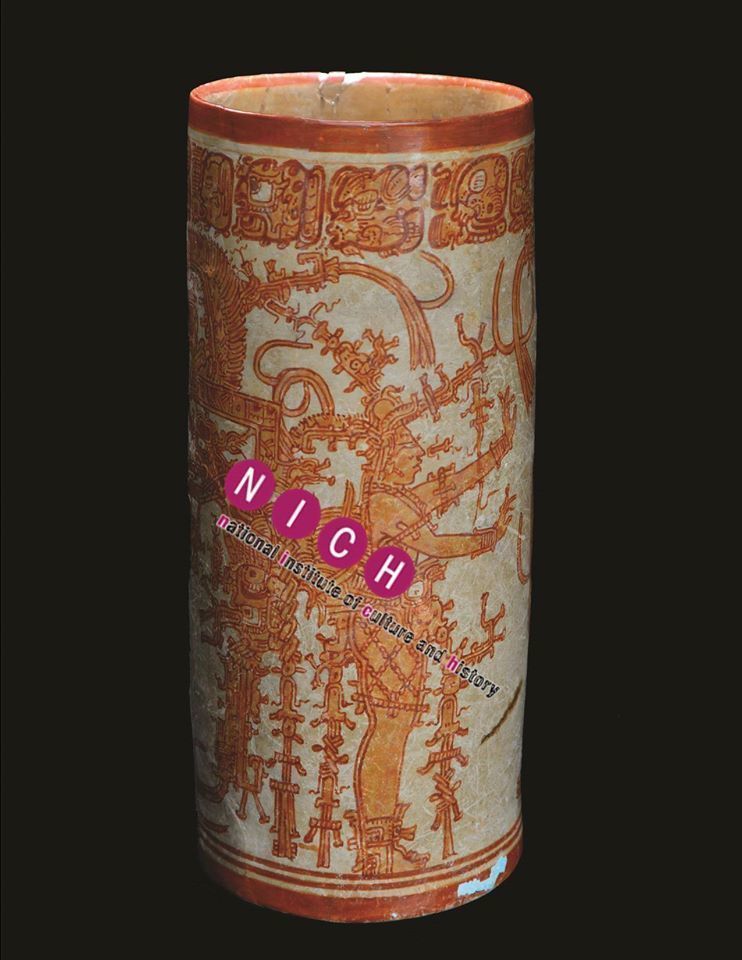 When an artefact is looted, its archaeological context is lost.

An audio recording of this article is available here or at the bottom of the page.

Without knowing exactly where an object came from and what other artefacts were near it, our ability to learn about the ancient past from the piece is either greatly reduced or totally obliterated. When scholars try to reconstruct contextual information about looted artefacts, they risk making up stories that have no ties to reality. Without context, we have no foundation on which to construct an object’s history. Looted artefacts introduce false information into what we know about the past and rob us of our ability to learn about our heritage.

Exhibit A: The Vase

Tall and elegant with a gentle swell around its middle, this is a gorgeous classic Maya vessel. A study in oranges and creams, the vase is in the so-called “Holmul Dancer style”, named after a similar pot found at a Maya site in Guatemala. Hundreds of looted Holmul-style vessels have appeared on the international art market. It portrays two individuals in elaborate regalia: their vestments are downright mythological. Both figures are the Maize God, one of the most important deities in the Maya pantheon. His back-rack is a model of the Maya universe: a celestial bird on a sky band, a cosmic dragon and a waterlily jaguar, a sacred mountain. Above him is a band of hieroglyphs that state that the vase was made for Lord K’ak-Til, the divine lord of Naranjo (an ancient Maya city in Guatemala), and that the vase was meant to hold fresh cacao beans. Luscious quetzal feathers sprout out in all directions. The Maize God’s fingers move almost musically. From his nose and mouth comes divine breath.

Analysis 1: If the Vase was Looted 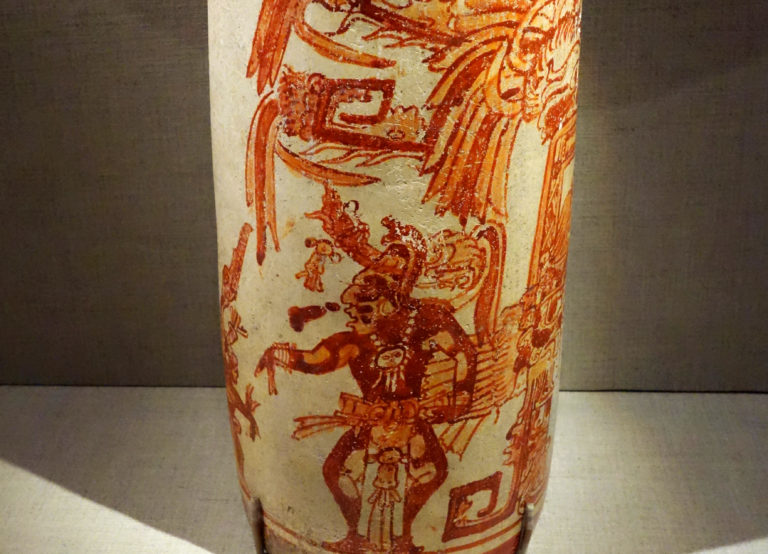 A Holmul Dancer style Maya Vase. Sadly this one was looted. We don’t know where it came from. By Daderot, public domain

Imagine this vase appeared, without any archaeological information, as a looted and trafficked antiquity on the international art market. Thousands of similar Maya vessels have suffered that very same fate. We would know absolutely nothing about the piece except what was painted on it: the information contained in the writing and the iconography. It is a common assertion that there is still a lot of academic value left in looted antiquities, especially antiquities with writing on them. Collectors, dealers, museums and others maintain that information recovered from trafficked cultural objects aids our understanding of the past.

If that is the case, what would a reasonable scholar conclude about this vase?

1. That the vase was looted from the Guatemalan site of Naranjo

2. That it was used by a Naranjo ruler named Lord K’ak-Til

3. That it came from Lord K’ak-Til’s tomb

4. That it held cacao beans

That’s it. We would assume we have K’ak-Til’s cacao vase, looted from his tomb at Naranjo, Guatemala. 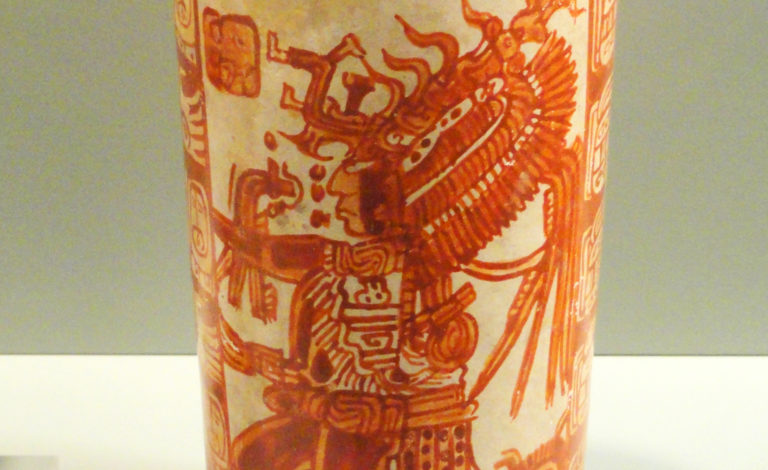 Another Holmul Dancer style Maya Vase. Sadly this one was looted as well. We don’t know where it came from. By Daderot, public domain.

We are lucky. This is one Maya vase that escaped the looting caused by international demand for illicit Maya ceramics. This pot is known as the Buenavista Vase as it was excavated by archaeologist Joseph W. Ball in 1988 at the site of Buenavista del Cayo, Belize. It was found in the spectacular tomb of an elite adolescent Maya male within structure BV-1, a pyramid at the site. The man was buried wearing jaguar fur mittens and booties, and his body was covered with over 8,000 obsidian (volcanic glass) blades.

Contrary to the conclusion we could draw from the vase alone:

Archaeologists now believe that Lord K’ak-Til had the vase made as a gift… a gift he gave to the ruler of Buenavista. It seems likely the gift was a memorial to the Lord’s dead son, the young man buried in the tomb. We can imagine a grieving father thanking Lord K’ak-Til, placing the beautiful piece in the tomb, and burying his child. We’d know none of this if the vase was looted. We’d still think it was stolen from Guatemala.

Everyone can visit the Buenavista vase in the Museum of Belize.

For a hundred years the whole Maya region was embroiled in a vast and complicated war. It was a Maya ‘world war’ between city-states allied with the city of Mutul (now know as Tikal, in Guatemala) and the ‘Divine Lords of the Snake’ from Ox Te’ Tuun (now known as Calakmul, in Mexico). Naranjo was a large and powerful kingdom at the time but it, too, was swept into the war. In about 682 AD, Calakmul established a new ruling dynasty at Naranjo through a woman named Wak Chanil Ajaw (called Lady Six Sky before her name was able to be read). This meant that Naranjo was allied with Calakmul.

And thanks to the Buenavista Vase, we know that Buenavista, in Belize, was allied with Naranjo. We can now begin to speculate whether Calakmul’s influence during the war reached Buenavista, or maybe even that whole region of Belize. The friend of my friend is my friend.

The Buenavista Vase is the only document we have that ties Buenavista to Naranjo and the only document that hints at a connection to Calakmul. With this one archaeological find we have expanded our understanding of Classic Maya sociopolitics with links that span three modern countries. We would have none of this if the vase had been looted and its context had been lost.

There are thousands of looted Maya vases that exist in international collections, their contexts destroyed. Imagine all the stories that we have lost.

For more about the Buenavista Vase and Maya ceramics see: Painting the Maya Universe: Royal Ceramics of the Classic Period (1994) by Dorie Reents-Budet. Duke University Press.