Why am I here? Introducing your educator

In this step Donna Yates discusses how she got involved with the study of antiquities trafficking and art crime. 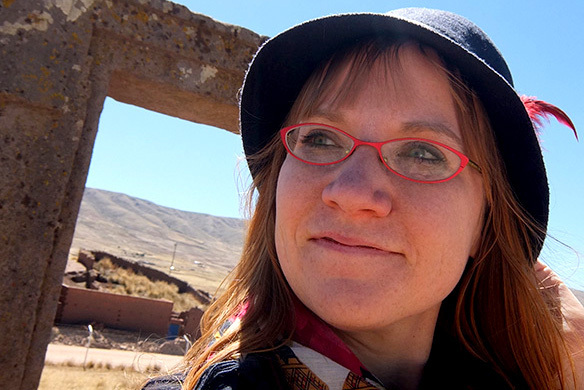 Hi. My name is Donna Yates. I’m an archaeologist and art crime researcher with the Trafficking Culture Project. I’m based at the Scottish Centre for Crime and Justice Research at the University of Glasgow and I will be leading this course.

Before we start the course I am going to tell you how I came to study Antiquities Trafficking and Art Crime. This is my story; this is why I am here. I hope you’ll respond and share a bit about yourself and your story in the comments. I look forward to meeting you! 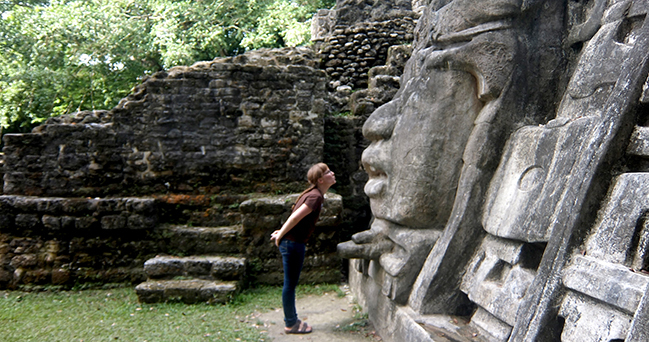 Giving a temple a kiss while doing antiquities trafficking research in Belize in 2014.

I have wanted to be an archaeologist since I was a small child growing up in Kansas and Georgia. My supportive parents took me to museums, made sure I had ancient history books, and encouraged me to study archaeology at college. At Boston University I fell hopelessly in love with the ancient Maya. The idea of massive cities hidden by the jungle and photographs of beautiful and intricate Maya iconography captured my imagination. This, I thought, is what archaeology was meant to be. I studied the Maya for three years, both on my own and in the classroom, and in 2003 I bought a hammock and a tent and headed to Central America. 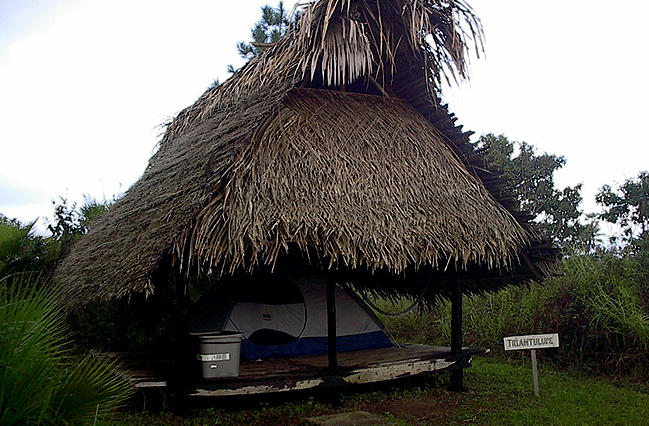 Probably the nicest place I’ve ever put my tent. I lived in this one for 6 months in Belize in 2003.

So there I was, 15 years ago. A young archaeologist on my first REAL dig. For three months I worked on an archaeological project in Belize, studying small Maya sites next to rivers. Toucans flew overhead, chocolate grew in nearby orchards, and I worked very hard not to get malaria. Although the setting was beautiful, the sites were minor. I still longed to work at the mysterious Maya metropolises of my dreams.

In May I crossed the border into Guatemala’s jungle-covered Petén province where I met up with another archaeological project. We bought supplies, got in a series of trucks, and drove into the jungle. By way of dry riverbeds and donkey paths, we stopped at an iconic and almost legendary Maya site six hours from the closest village. This was a true city: temples and pyramids and palaces reclaimed by the jungle. Monkeys swung overhead and jaguars literally lived in the ruins. This Maya site represented everything I hoped archaeology would be: the riddle of the ancients was before me and I was there to solve it. We got to work. 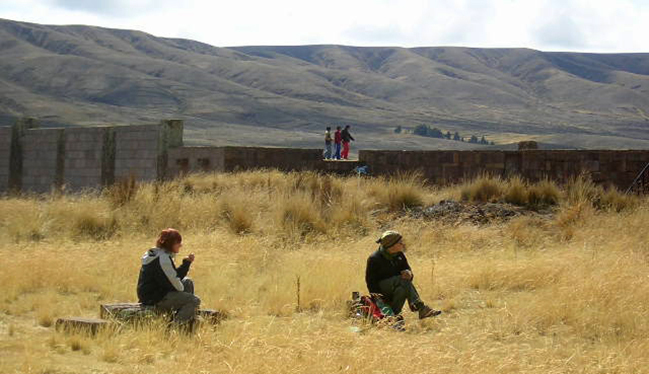 A break while excavating at the World Heritage Site of Tiwanaku, Bolivia in 2005. Tiwanaku’s church has been robbed of sacred art three times recently.

Yet it became immediately clear that something was very wrong. The site, with its hundreds of buildings, was in poor shape. The jungle had protected it for 800 years, but could not save it from modern looters. The site had been completely torn to pieces to satisfy an international demand for stolen Maya artefacts.

Every single major structure at the site had been tunnelled into. Some were cut right in half. Large pyramids had collapsed in on themselves after looting made them unstable. The Guatemalans on the project told stories of modern bodies in the pyramids: looters killed in cave-ins. This glorious Maya site had been devastated before archaeologists could even study it. Why? 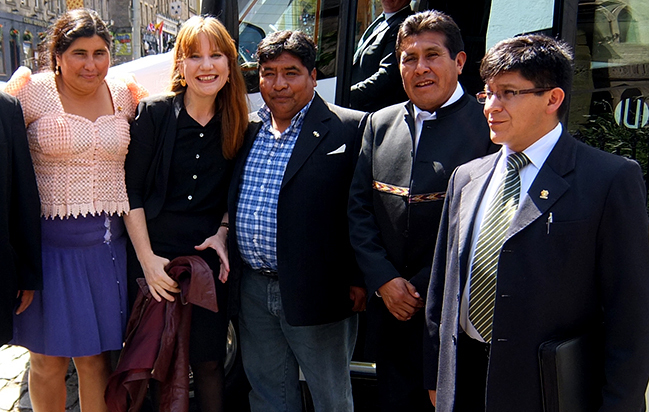 Meeting with members of Bolivia’s Congress in 2013. We talked about protection of heritage and, of course, Scotland!

Even worse: my local Guatemalan partners confided in me that another Maya city was, at that very moment, being looted. They warned me not to tell anyone, saying the looters had killed people in the past and would kill again. I was terrified. As it turns out, they were right: the site that had been looted is called Cancuén and someone had been killed. 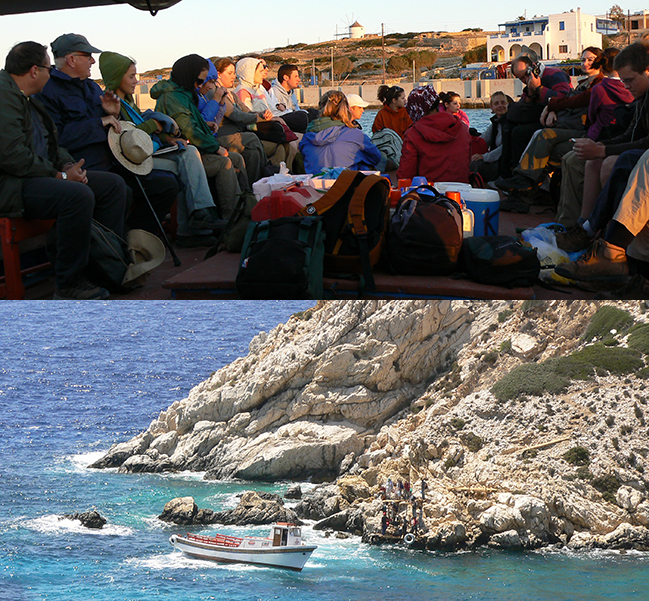 This was my commute to work while excavating on the island of Keros, Greece, in 2007.

Yet, at that point, I was expected to just go about my work as an archaeologist. To clean up the looting mess as much as I could and try to gain some insight from the tattered remains. It was a long, hard journey back home for lots of reasons, not the least being because I was questioning my future as an archaeologist. Could I really just sit idly by as the ancient past that I loved was destroyed so that very rich people could have pretty things? Didn’t I have a right to know about our human heritage?

I felt that I had been robbed.

By the time I got back to the US my mind was made up. I had decided to devote my life to the study of archaeological looting, antiquities trafficking, and art crime; I would fight for the protection of cultural heritage. 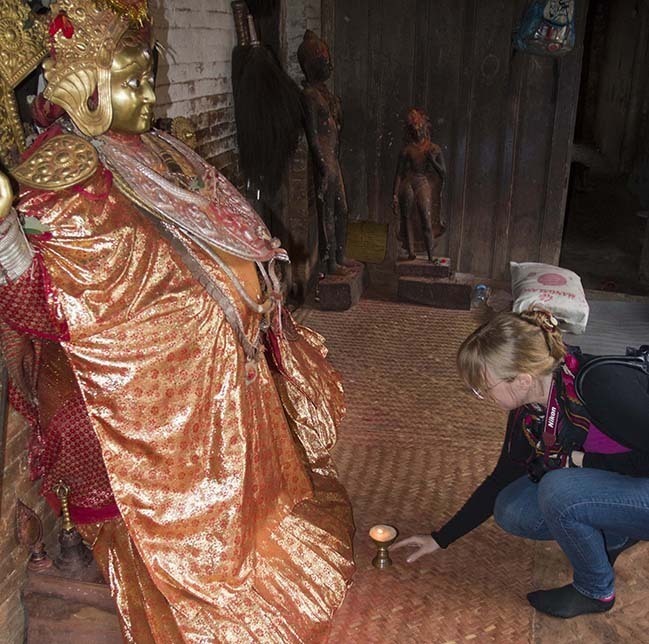 Making an offering in the ancient village of Sankhu while studying idol theft from temples, Nepal 2015. Photo by Shailesh Rajbhandari. 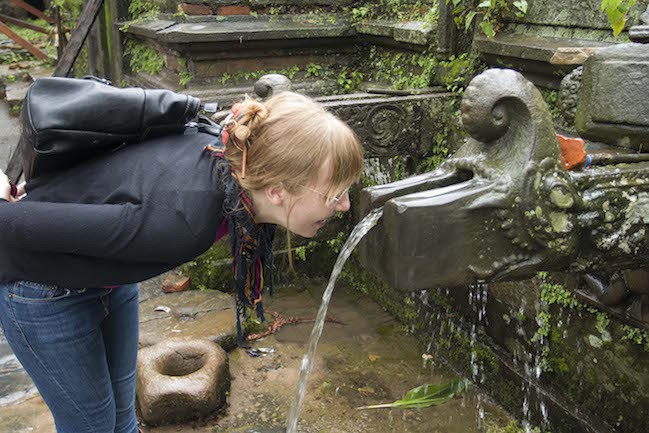 Stopping for a sip while studying temple theft and idol trafficking in Nepal, 2015. Photo by Shailesh Rajbhandari.

The rest is almost history. I got a Masters and then a PhD on the topic in the Archaeology Department of the University of Cambridge. I’ve conducted related archaeological and anthropological fieldwork in Bolivia, Ecuador, Belize, Mexico, Greece, and Nepal. I was awarded a Fulbright and a Leverhulme Fellowship to study antiquities smuggling as a member of the Trafficking Culture Project at the University of Glasgow. Now I have a joint lectureship at Glasgow in Criminology and Art History to continue this line of research as well as to invite students to learn about Antiquities Smuggling and Art Crime.

My brother and I meeting with a shaman while conducting antiquities trafficking research in Ecuador, 2007.

Why am I here? Because I think that culture belongs to everyone, and that threats to art and the destruction of archaeology makes our world a much poorer place. I am here because I want to make you all aware of these issues, help you engage with crimes against art and archaeology, and give you all the knowledge and tools needed for you to protect the past as well. If we raise awareness about these issues, we may be able to reduce or ultimately eliminate the market for illicit antiquities and stolen art. If you tell one friend about what you have learned on this course, if you spread the word about this serious threat to world culture, I’ve done my job.

Working in a Maya cave in the Belizean jungle. Caves are filled with artefacts but very difficult to protect from looting.

Furthermore, the topics covered in this course are complicated. I don’t have all the answers. Your ideas, experiences, and opinions about antiquities trafficking and art crime are valuable. You, too, have been robbed. 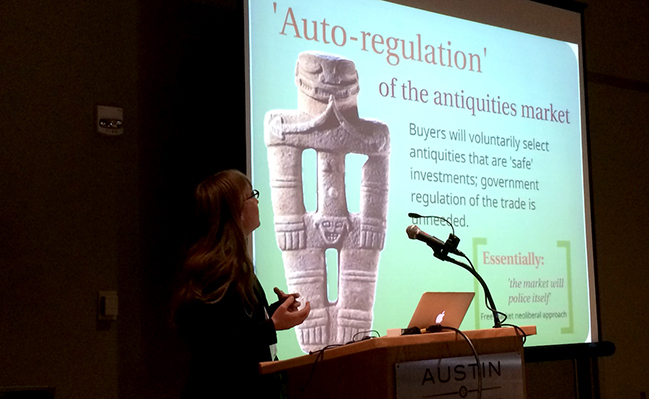 I travel a lot, not just to research but to TALK about my research. Here I am giving a talk in Austin, TX, 2014.

So please share your story in the comments and comment on your fellow students’ stories. Let us know why you are interested in this issue. Why are you here? Has Art or Antiquities Crime ever touched your life? What do you hope to learn from this course? 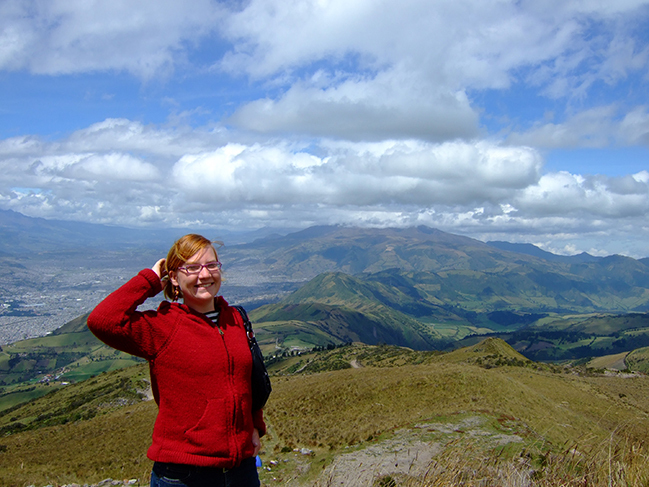 On the Pichincha Volcano above the city of Quito while in Ecuador studying antiquities looting in 2007.