Learn more about the common mechanisms of antimicrobial resistance.
© BSAC

There are various different mechanisms of resistance to common antimicrobials. Genes for such mechanisms can be grouped into four main categories. 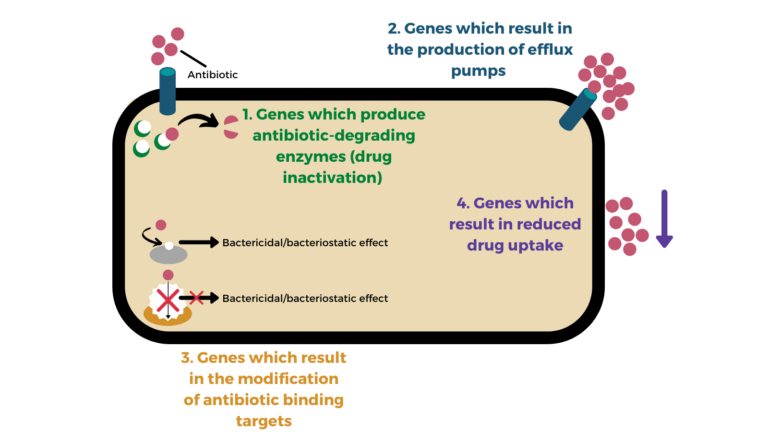 The four main categories of antimicrobial resistance in bacteria

Resistance via antibiotic-degrading enzymes refers to mechanisms that result in the inactivation of the antimicrobial drug of choice. For example, bacteria may produce enzymes that alter or inactivate an antibiotic. A common enzyme produced is β-lactamase. β-lactamase can be produced by most Staphylococcus aureus strains and in an increasing number of Gram-negative bacteria. Different β-lactamases affect different antibiotics:

Inhibitors of β-lactamase/ β-lactams have been shown to help with resistance, though they do not overcome all resistance.

Bacteria such as Pseudomonas aeruginosa and Stenotrophomonas maltophilia have been noted as being able to have more than one efflux system overexpressed simultaneously, increasing resistance to multiple antimicrobials.

Resistance to tetracycline by P. aeruginosa is mediated by largely by efflux pumps situated in the cell membrane – through tetracycline can enter the cell, it is rapidly pumped back out.

Antibiotics have specific mechanisms of action and therefore often target one particular part of the bacterial cell. Bacteria may change the target site for the antibiotic, making the bacteria resistant against that antibiotic.

An example is seen in enterococci vancomycin resistance against Linezolids – which primarily target stages within bacterial protein synthesis. Mutations have been identified in the 23S rRNA which decreases Linezolid binding affinity. Similar mutations in 23S rRNA against Linezolids have also been shown in Escherichia coli.

Rifampicin is often used to treat TB, though resistance is reducing its use as a mono-therapeutic drug. The drug targets the β-subunit of RNA polymerase which is encoded by the gene rpoB. In Mycobacterium tuberculosis, the rpoB gene has a very high mutation frequency, resulting in increased Rifampicin resistance.