Skip main navigation
Home / History / Archaeology / Archaeology and the Battle of Dunbar 1650: From the Scottish Battlefield to the New World / Allies to enemies: Why were the Scots and English at war?

Allies to enemies: Why were the Scots and English at war?

Let’s quickly review the developing political dynamic between England and Scotland in the mid-17th century. This is important historical background to the archaeological discoveries we discussed in Weeks 1 and 2.

In 1637, King Charles I’s attempts to impose changes on the Church in Scotland had met with fierce opposition. Men flocked to sign a National Covenant to uphold the Scottish Kirk, but the King refused to give way. In the years that followed, Covenanting Scots and Parliamentarian English fought together as allies against the Crown. 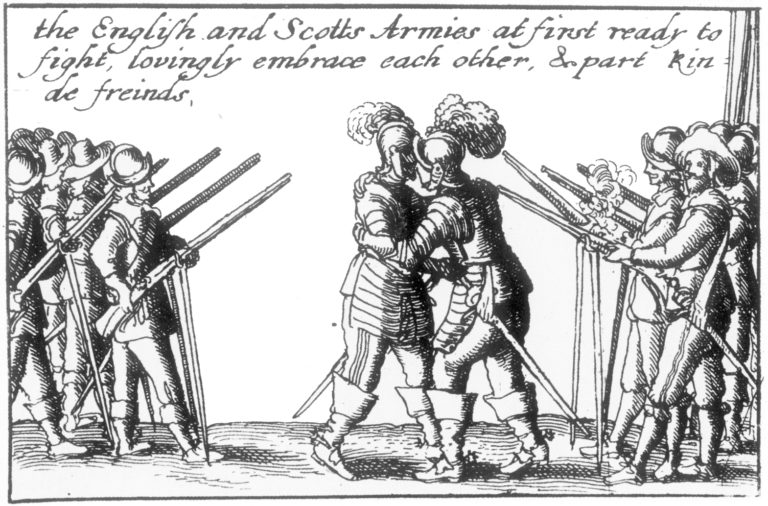 ‘The English and Scotts Armies at first ready to fight, lovingly embrace each other, & part kinde freinds’. In this contemporary satirical woodcut, the Solemn League and Covenant of 1643 brings two old enemies together; laying aside centuries of conflict and mistrust, the Scots make common cause with the ‘old enemy’ England against Charles I. Wikimedia Commons, public domain.

In England, Cromwell’s Parliamentarians set out to dismantle the authority of the monarch and the Anglican Church. After Charles I was executed, many in Scotland – where Kirk and Government were closely intertwined – viewed Cromwell and the English as heretics with no right to execute their king.

With Charles I dead, his son Charles II took vows in June 1650 to observe, uphold and defend the practice and customs of the Church of Scotland. The man who claimed the throne and the right to rule in England was now, to all intents and purposes, a Covenanter. Even though Scottish Presbyterian ministers took a dim view of Charles’ preferences for a good party and questionable company, the Scots Parliament and the Crown were now united in opposition to Cromwell and the English Parliamentarians.

At the beginning of 1650 the Scottish Army was extremely short of men. Attempts were made to raise a levy of 19,000 troops from the nation’s population. Twelve years of war had taken its toll on men of fighting age in Scotland. Each county appointed a committee to decide what manpower could feasibly be raised.

In August 1650, the Scottish General David Leslie was deprived of many of his most experienced commanders and veteran soldiers in an ideological purge by the Kirk, leaving many new recruits in the Scottish ranks. Untested as soldiers, these conscripts were drawn from families from the Lowlands, Central Scotland and Aberdeenshire who had suffered terrible and repeated famine over generations. These were lads recruited fresh from the fields, called out from workshops and weaving sheds, towns, farms, crofts and fishing villages. This provoked one frustrated Scottish colonel to call it an army of ‘nothing but useless clerks and minister’s sons who have never seen a sword, much the less used one’.

Although the Scottish army was greater in number, Cromwell’s invading army was composed of well-disciplined veterans.