In this article we reflect on the results of the skeleton analysis in Week 2 in the light of the historical context we have learnt about in Week 3.
© Durham University

This is a good moment in our course to reflect on our results to date and, in particular, to consider the developing historical context for the scientific results which we discussed in Week 2.

Given that those imprisoned in Durham were not ranking officers, and bearing in mind the skeletal evidence for their upbringing, it seems unlikely that the men came from wealthy families. At this date most Scots still lived and worked on large estates in ‘fermtouns’ (farming townships/communal farms), sharing out their agricultural tasks and resources. As such, the prisoners are most likely to have been under-tenants (and so leased their land rather than owning it) and would have been involved with physical work from a young age. These were close-knit, interdependent communities, often with several generations living under one roof.

Almost nothing survives today of the houses of the rural poor – above ground at least. Some families would have lived in ‘long houses’, otherwise called ‘byre or black houses’, which were constructed of wood and turf and usually had two or three rooms, in one of which a cow (or cattle) was usually kept. These houses were dark and would have had open hearths, seldom chimneys, and were poorly ventilated – something which may explain the soot embedded in the plaque on the men’s teeth and also their sinusitis. Elsewhere in Scotland, houses were built with wooden cruck frames or were of timber-and-turf construction, including the so-called ‘creel houses’, which had wickerwork walls. Living conditions and materials for construction varied from humble rubble stonework cots covered in turves in rural East Lothian to the tall houses and narrow alleyways of Edinburgh − where one of the Dunbar regiments was raised. Living in the capital, however, did not necessarily equate to a more healthy environment. Human waste was thrown out of upper-storey windows into the streets below, a habit for which the city was notorious. 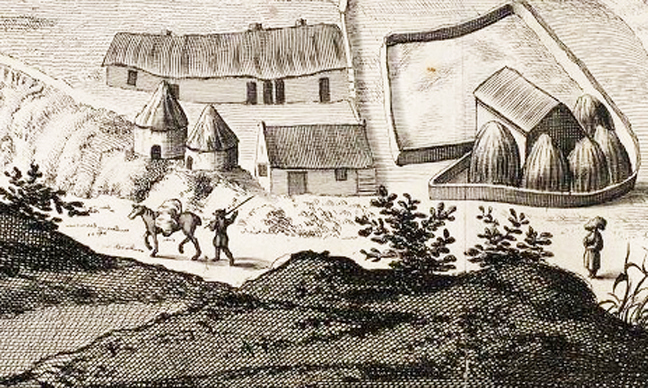 Depiction of a Scottish farm in ‘The Prospect of the Abby of Dunfermling’, by John Slezer for his book ‘Theatrum Scotiae’, 1693 © National Library of Scotland, Scottish Charity, No: SC011086.

Plant proteins of oats, with beans and leafy green vegetables, were all found in the tartar (plaque/calculus) of the Scottish soldiers (Step 2.11). Oatmeal porridge (possibly first described in 1615), oatcakes and oat bread are all referred to in the early 17th century in Scotland and were certainly part of the military diet. Porridge was made with water but eaten with milk, though not in great quantities, or with butter or ale. Although nutritious, this kind of diet is low in vitamins and this may be borne out in those Dunbar prisoners who were deficient in vitamin C.

Meat consumption was probably limited too and might have been eaten salted or potted to preserve it better or consumed as haggis or blood pudding which contained offal, or in a broth with barley and kale. The latter, in particular, would have been an important source of vitamin C and the brassica proteins detected in some of the Scottish soldiers’ calculus could well have come from kale or cabbage. Other greens, such as peas and beans, would be grown too, as well as root vegetables. Potatoes were still regarded as a novelty in Britain.

Other foods were available locally such as eggs and sometimes freshwater fish. Marine fish was obviously available around the coast, but less so further inland. Although the herring fleet went out from Dunbar, for example, it is unclear how much fish was eaten by ordinary people and how frequently. None of our individuals had a significant marine fish component to their diet, as detected in the isotopes of their tooth dentine.

Several of the people represented by the skeletons found at Palace Green had lived in different locations, long enough for their movements between those locations to leave tell-tale traces in their bodies (isotope measures). Why did people move about? One reason was to find paid work. Young men from rural locations often sought employment and apprenticeships in towns and there were large seasonal hiring fairs for farm servants. Tradesmen too formed another migratory group in the countryside and between country and town. Life-course migration, as well as subsistence migration to escape shortage and famine, might well explain the evidence for movement seen among the soldiers.

Finally, there were many Scottish fighting soldiers involved in conflicts in northern Europe in the early 17th century. Veterans of earlier conflicts stayed on to serve in Dutch, French, and Swedish armies in the Thirty Years’ War (1618-48), and then chose to remain. General David Leslie himself had served under the Swedish king. The isotope signatures of three men (Sk 5, Sk 24, and Sk 27A) suggested that they were born in northern or eastern Europe, which includes the Bohemian massif, Poland, Sweden or Norway. Sk 5 was a young adult when he died and it is possible that he and Sk 24 were the sons of Scots émigrés. Sk 27A, who was somewhat older at 36-45 years old, is perhaps more likely to have been a foreign soldier of fortune. A few weeks after the Battle of Dunbar, ‘Dutchmen’ and High German mercenaries were recorded in the Scots army but it is not clear if they were actually present at the battle itself. The archaeological evidence certainly suggests that they were. 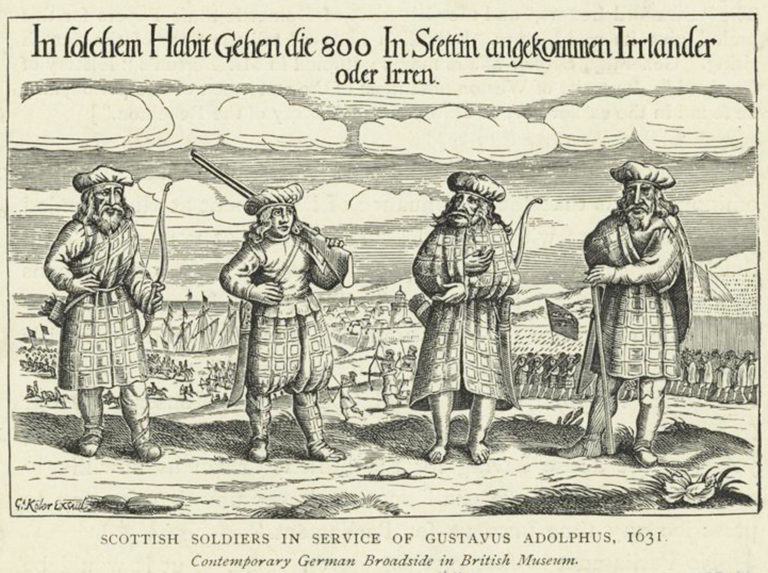 Scottish soldiers in the service of King Gustavus Adophus of Sweden in 1631. The legend may be translated to read ‘This is the clothing of the 800 Irishmen who have arrived in Stettin’. The Scotsmen were mistaken for Irishmen because they spoke Gaelic. Art and Picture Collection, The New York Public Library Digital Collections 1893-1895, public domain.