What was an indentured servant?

Residents of New England in 1650 would have been very familiar with the idea of indenture. When contracts of service were drawn up, the legal document was ripped in two, each party keeping their half as proof – the ‘indents’ of the torn edge would only fit with the other half. This gave rise to the word ‘indenture’.

Prisoners, vagabonds and pirates had previously been transported overseas as enforced labour, others were tricked into signing and sailing. The word ‘kidnap’ was coined to describe the abduction of children, and of course only the fortunate few could read what they were signing. Nevertheless, English settlers in particular also came voluntarily as indentured servants, to start a new life and escape hardship. Nearly half of the 200,000 men and women who sailed out to the colonies in America in the 17th century were indentured servants. The demand for labour was high.

The Dunbar Scots who became indentured servants were valued at about £10 each and required to work for their owners for 7 years. During their service they ‘belonged’ to someone else and were treated as a labour force. Their individual experience varied according to their masters, their accommodation, and the different tasks they might have to perform.

Although some records suggest that several Scots were released before their contracted term, relations were sometimes strained. Alexander Maxwell, a Dunbar man, received 30 lashes for exobitant and abusive carage toward his Maister & his Mistresse. Most misdemeanours, however, were slight. As one observer noted wryly at the [Saugus] Iron Works wee founde all the men wth smutty faces and bare armes working lustily… but some of the workmen be young, and fond of frolicking, and sometimes doe frolicke to such purpose that they get before the magistrates… one or two hath done naughtie workes with the maidens living thereabouts.

Theirs was a different experience from slavery, at least in the way that term is generally used today. For the Scottish prisoners, enforced service was not permanent and did not apply to their children. Following their term they regained the rights of freeborn citizens, were free to travel and settle, and were often granted land in newly-established townships. 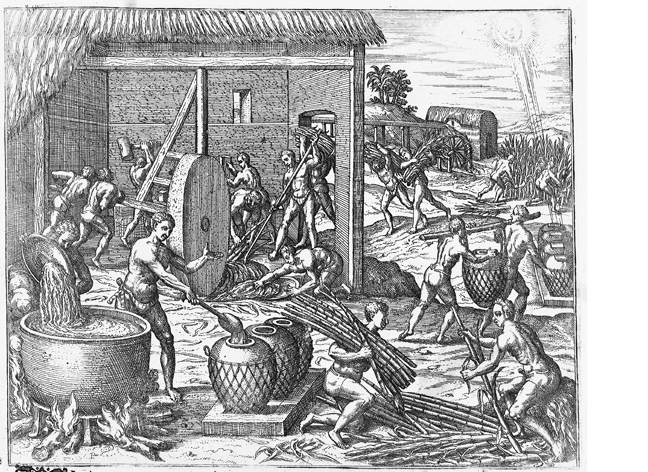 Forced white labour was used in the colonies before African slaves arrived. Making sugar, shown here, was hard work and dangerous: the sugar cane had to be crushed, boiled and left to set. The main tasks are succinctly illustrated here by Johann Theodor de Bry for his ‘Americae pars quinta’ (1595), soon after sugar was discovered in the New World. Wellcome Library, London (CC BY 4.0).