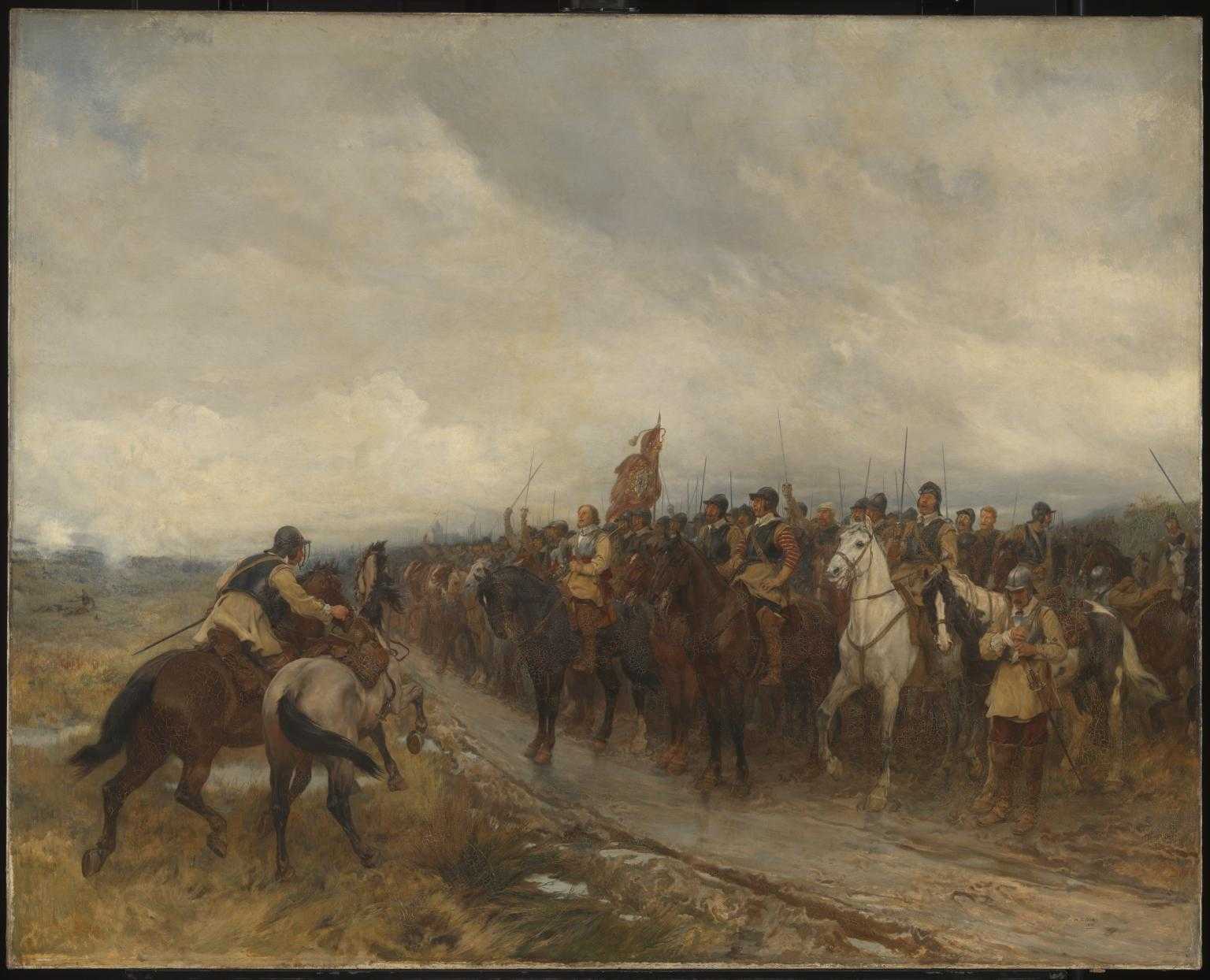 In 1886 British painter Andrew Carrick Gow (1848-1920) painted a famous reconstruction of Oliver Cromwell before his men at Dunbar.

Gow specialised in scenes from British and European history, several of which were inspired by 17th century events such as ‘Montrose at Kilsyth’, ‘The Visit of King Charles I to Kingston upon Hull’ and ‘Cromwell dissolving the Long Parliament’. Gow was also keen on Napoleonic subjects as well as being driven to record newsworthy events of his own day such as ‘The First Zeppelin seen from Piccadilly Circus, 8 September 1915’. He occasionally turned his hand to portraits too.

Gow’s Dunbar painting belongs to a broad genre with a long tradition known as ‘history painting’. Themes from mythology, religion, literature and history were commonly depicted in a large-scale format. Among the different historical events represented were battle scenes. Typically, these scenes are highly idealised and ‘capture the moment’ in a grand style; they cannot be relied upon to be accurate in any way. In Gow’s case the painting avoids the events on the battlefield itself. Although some darker moments are suggested by the out-of-focus figures of men and animals on the left side of the canvas, the dead and wounded are left largely to our imagination. Instead the artist selects one segment of the narrative, the rounding up of a single riderless horse from the Scots cavalry which symbolises their defeat, while the English troops, with Oliver Cromwell at their head, shout out in unison their battle cry of ‘Lord of Hosts’ or perhaps sing the 118th psalm. The danger of the scene becoming overly melodramatic or sentimental is neatly sidestepped.

The political context in which Gow painted his picture may be significant. During the 1880s British troops had become involved in the first Anglo-Boer war and suffered heavy losses, many of them being blamed on strategy in the field. The 313-day siege of Khartoum in 1884-5 had only just come to its terrible end with political consequences for British Prime Minister Gladstone at home. Cromwell’s victory at Dunbar, by contrast, represented a heroic triumph for the English against all the odds.

What ‘message’ do you read into Gow’s painting? Discuss with other participants in the Comments section below.