Skip main navigation
Home / History / Archaeology / Archaeology and the Battle of Dunbar 1650: From the Scottish Battlefield to the New World / Exhibition: discomforting histories

A logical progression from the discovery of the mass graves on the library site in Durham was that the story should be told in an exhibition. As you have already seen, there had been huge public interest both in the UK and overseas and, once the reburial of the skeletons had taken place, it seemed a fitting way of concluding this chapter of the story, however discomforting this aspect of the history of our site was.

Palace Green Library exhibitions regularly showcase research projects taking place at Durham University and it has developed a model that positions research at the heart of exhibitions and the surrounding programmes. 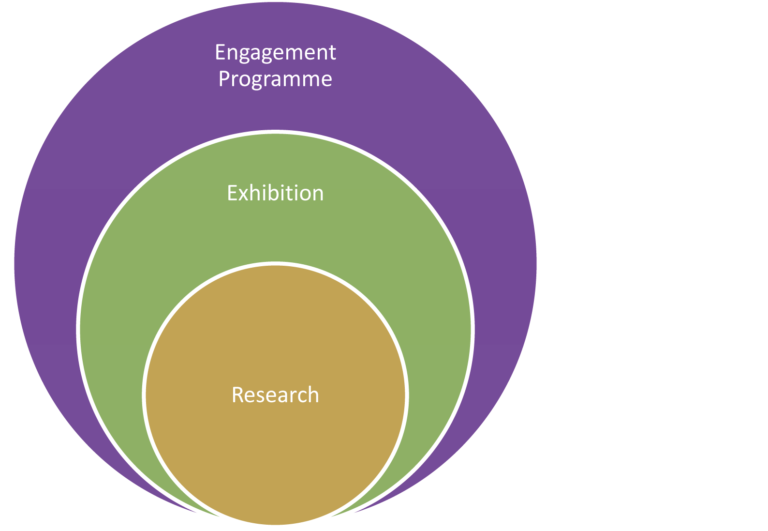 To begin the process the team scoped the project and drew up a map of possible avenues to consider (below). This then led to the development of an exhibition plan with a series of agreed key messages against which all of the exhibition content would be tested. 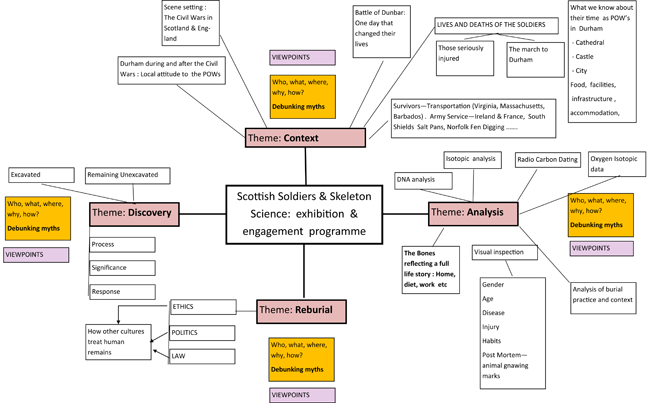 One of the difficulties faced by any exhibition is showing the right objects to tell the story. Our lenders ranged from Saugus Iron Works Historic National Park, to National Museums Scotland, the National Portrait Gallery and the Royal Collections Trust. For each, a lengthy process of negotiation culminated in a legal agreement for loans. At the same time, we were agreeing the final interpretation of the archaeological and historical results, designing the exhibition itself, and its marketing materials.

Sheridan Design produced the design according to a tight brief drawn up by the curatorial team based on key messages and a storyboard. The exhibition took visitors on a journey from the discovery and identification of the remains, through to what we had learned from historical and scientific research. It concluded with an examination of the science behind the story and an exploration of the ethics and impact of the project on team members and other stakeholders, including descendants. The marketing design was a collaboration between Sheridan and Palace Green Library’s in-house graphic designer. This visual identity and brand was then applied to all marketing material to ensure consistency.

One of the most difficult areas for the team to consider was the exhibition title. It was important that this explained what the exhibition was about to people who were not familiar with the story whilst also maintaining the integrity of the research and an ethical approach. An earlier working title of ‘Lost Lives, New Voices: Unlocking the story of the Scottish Soldiers, 1650-2018’ was discarded in favour of a new title ‘Bodies of Evidence: How science unearthed Durham’s dark secret’. 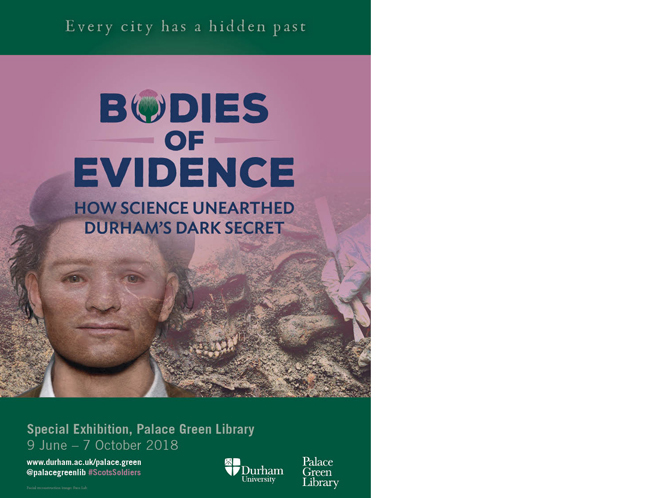 The exhibition attracted over 5,300 paid visitors over four months with several thousand more attending corresponding events and additional school visits. Activities included traditional lectures, panel discussions, storytelling for adults and children, a 17th century re-enactment, craft sessions and hands-on workshops for historical records and family history. A specially adapted series of tours of Durham Castle told the story of the Scottish soldiers while a town trail allowed visitors to track down historic buildings which would have been standing back in 1650. Special creative events included photography walks which focused on evidence for the built environment of 17th century Durham and there were bespoke sessions for primary and secondary schools. Now we want the learning programme to continue and include school assemblies, workshops, and the provision of resources for teachers.

In addition, more than 2,500 members of the public have attended lectures given by the research team, 2,735 people accessed the exhibition app and a minimum of 15,600 visited the free access areas of the exhibition, taking the total numbers of people who engaged with the exhibition to over 30,000. Feedback was consistently very positive and visitors reported both having learned from the exhibition and been moved by the story. Numerous calls were made for a more permanent exhibition to be on show at the Palace Green Library site and that the story should be shared more widely. It was this response which convinced us to create the course we are sharing with you now.

If you were planning events linked to this story, what would be your priorities? What do you think would have greatest impact in engaging visitors and schools? Let us hear your views in the Comments section below.