Skip main navigation
Home / History / Archaeology / Archaeology and the Battle of Dunbar 1650: From the Scottish Battlefield to the New World / Going global: the travelling exhibition

How the travelling exhibition was organised
© Durham University

The exhibition at Palace Green Library during the summer of 2018 was on show for four months. The story being told in Durham had attracted strong national and global attention and we were keen to share the findings, so a touring exhibition was planned from the outset. This interest was evidenced by feedback from visitors to the exhibition who were keen to see the information shared, particularly in Scotland and the USA.

The exhibition in Durham included historic artefacts that had been borrowed from museums and other institutions across the UK and North America. Although touring exhibitions that include other people’s collections are possible, the team in Durham did not have the capacity to be able to coordinate such loans. For this reason, it was decided that a small touring exhibition would mainly comprise of information panels and digital content. Host venues would be invited to include their own relevant content while the exhibition was on show.

Two versions of the Scottish Soldiers story were planned; one to tour the UK and one to be shipped to North America. Each had a slightly different focus to reflect the known interests of audiences. A further spin off exhibition, looking primarily at the Skeleton Science part of the exhibition that underpinned the analysis of the skeletons, was also planned in direct response to visitor feedback on the Durham exhibition.

Durability was a significant consideration in deciding what form the touring exhibition would take and it was decided to use a freestanding format that is regularly used for commercial trade exhibitions. These can be packed, shipped and erected easily in a range of venues and are flexible enough to reconfigure to fit different types of spaces. The exhibition content will also be available to venues so that they can print it off in different formats and on to alternative materials as required. The design for the touring exhibition was also carried out by Sheridan Design who had been responsible for the design of the original exhibition at Palace Green Library.

The touring exhibitions would include the Battle of Dunbar film, which you saw in Step 3.4 of this course and a touch screen kiosk providing additional web-hosted content including a searchable map and timeline. 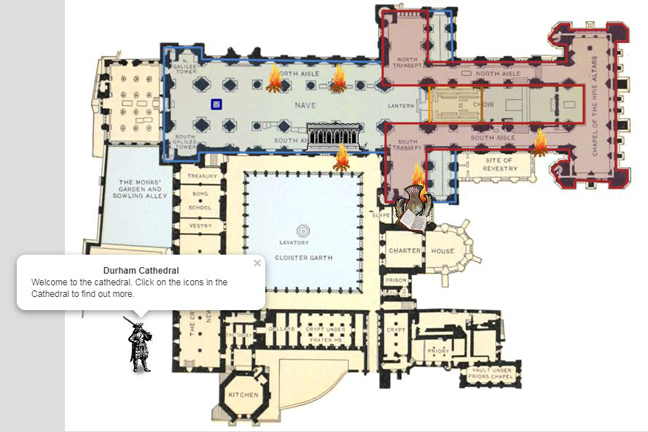 An image from the Scottish Soldiers Web App. © Durham University.

If you are interested in learning more about this subject then, for the UK, guidance on touring exhibitions is available via the Touring Exhibitions Group – a non-profit professional development organisation devoted to supporting the exchange of exhibitions to extend public knowledge and enjoyment of historical and contemporary culture. Their website includes useful downloadable resources.