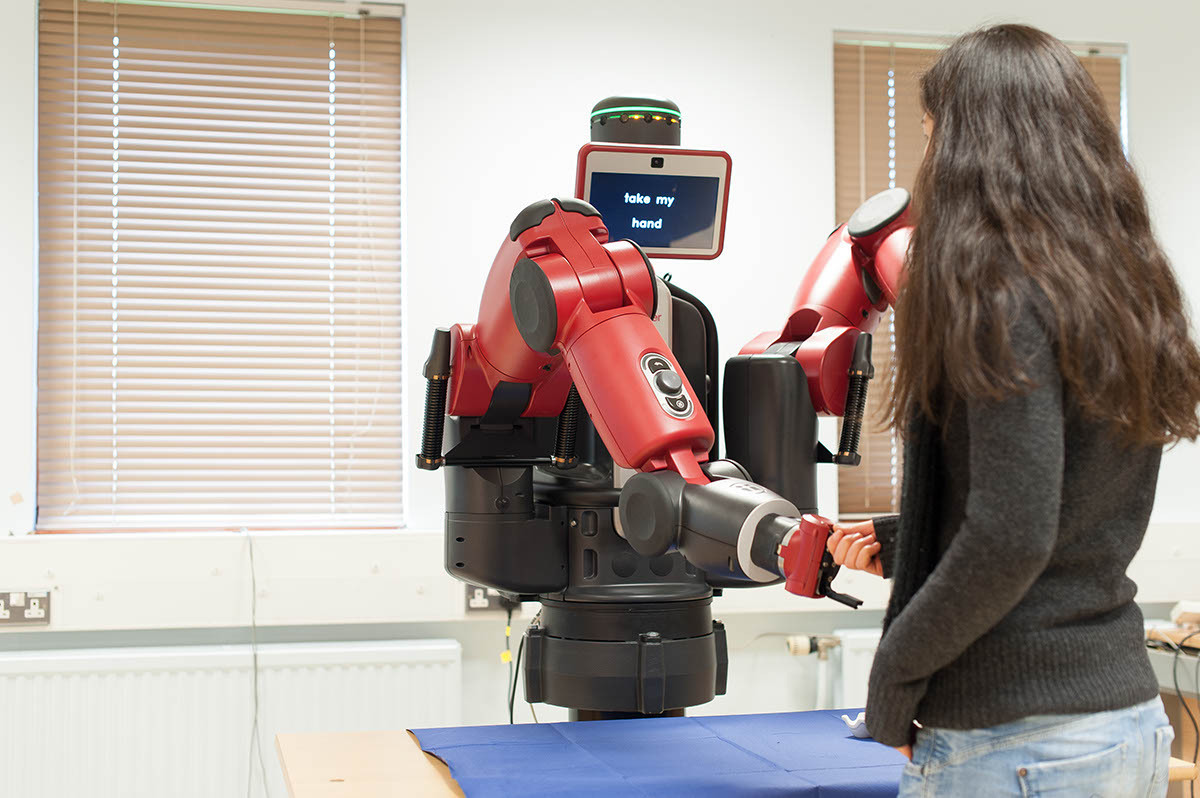 The human arm and hand is very intricate and dextrous – it is a challenge to make an artificial one. To illustrate the challenge, although a robot with six joints can be programmed to move to a specific position if there are no objects, a human will typically use at least 27 movements allowing us to reach around, under or into objects as well as going to the right position.

What is unique about animals and humans in robotic terms is the close coupling between sensors and actuators. This starts in the spine, but the human is able to take information from eyes, touch and sound and use these all to determine how the arm should move.

Each finger and thumb on our hand can move independently – moving from being outstretched to being clenched. Similarly, the arm bends at the wrist, elbow and shoulder joints, but how?

The answer is by using muscles, which can only work by pulling – they can’t push. Instead they work in pairs, one muscle pulls to make an arm bend say (flexing the arm is done with what are known as ‘agonist’ muscles), another pulls to straighten it again (extending the arm is done using the ‘ant-agonist’ muscles – guess why the name). So for the human elbow joint, if the triceps muscle is relaxed, the biceps muscle contracts and the tendons at the end of the biceps muscle pull a bone in the lower half of the arms, and your arm bends. Then, if the biceps muscle relaxes, the triceps muscle contracts, and the tendon at its end pulls another bone in the lower arm and the arm straightens.

There is a nice animation of this on the BBC Bitesize website.

This concept works with other muscles elsewhere in the arm and hand, and one of our research students is currently investigating control of such an arm using novel brain computer interfaces. The concept is also sometimes used in a simple form for prosthetic limbs and hands. The normal mode of operation is to use an actuator, or a person to pull on the joint (the agonist), and have a spring to act as the ant-agonist. A clever mechanism sometimes called a whiffle tree, can be used to equalise the forces across different joints.

Sometimes robotic arms have wires which can be shortened/lengthened using motors which are used to bend the arms and fingers. In robotics these cable drive mechanisms have many advantages as they are light and often have very small coefficients of friction (although human joints beat even these for low friction). But there have also been attempts to create artificial muscles which can also contract and relax. There has even been an arm wrestling competition to test out one class of actuator called electro active polymers (EAPs). So far they have not done well against a human opponent.

Early attempts were pneumatic artificial muscles (PAMs), originally developed in the 1950s. They consist of an inflatable inner tube clamped at each end inside a metallic mesh. When air is pumped into the tube, it expands and the effect of the mash is to make the tube shorter but thicker – rather like the triceps or biceps muscle. The Shadow Robot Company Ltd makes a series of robot arms and hands using these PAMs. There have also been muscles operated by electric motors or using hydraulic fluids.

More recently, researchers in Singapore have produced an artificial muscle made from a material which expands and contracts when subjected to electric fields (also an electro active polymer). This muscle, it is claimed, can expand up to five times its normal size and lift 80 times its own weight!