In this article, Miranda Kaufmann discusses the Cimarrons, free African people living in the Caribbean and South America. 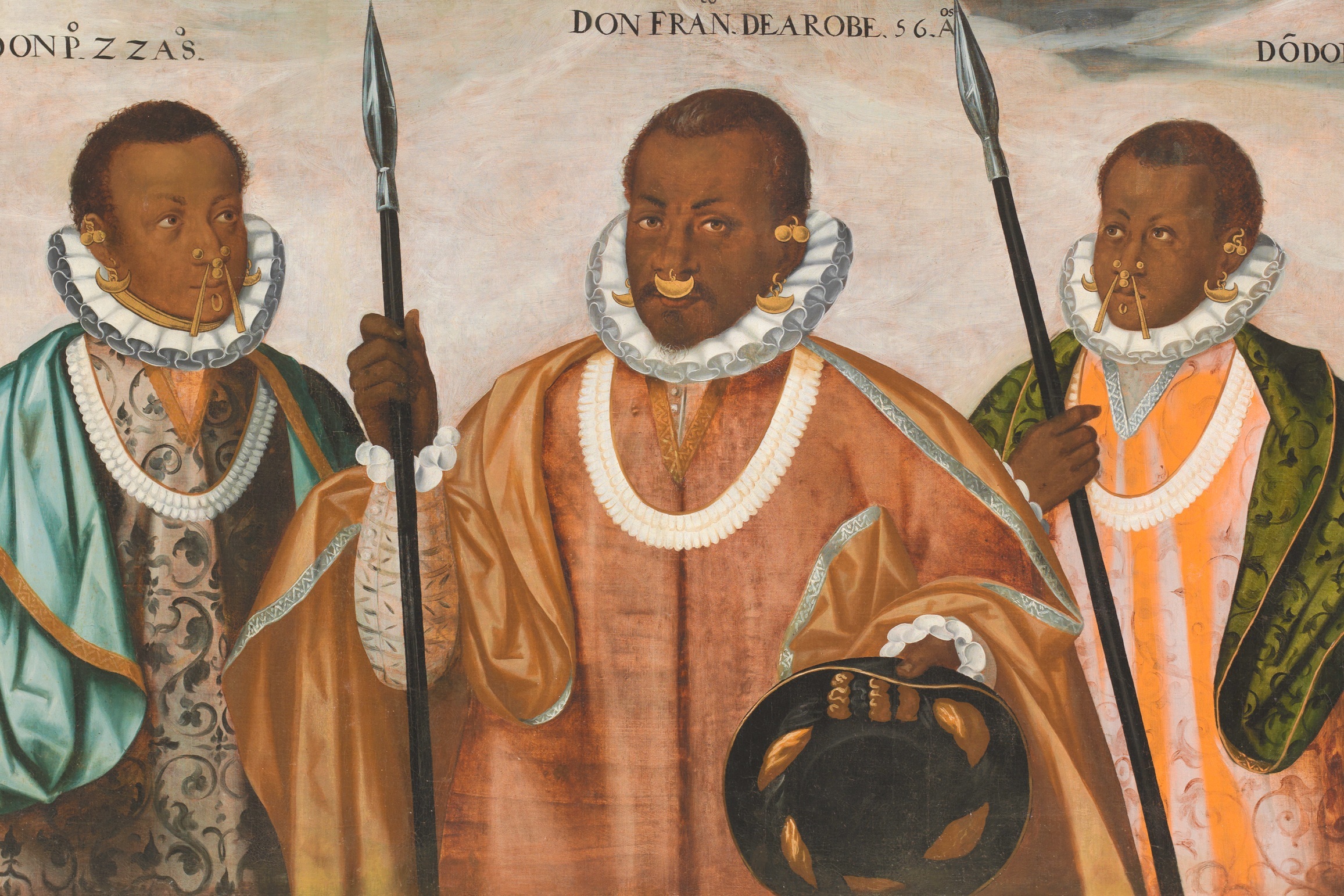 Who were the free African people living in the Caribbean and South America? When Drake asked Diego how he could help him take Spanish gold and silver, Diego suggested to Drake that he join forces with the Cimarrons.

The Cimarrons were substantial groups of free Africans who had escaped enslavement to set up their own communities. Typically, they had fled to remote and mountainous regions and were able to evade recapture.

The Cimarrons set up their own communities called palenques, often intermarrying with the indigenous native people. The Cimarrons became well established in Panama and across the Spanish colonies. There were 3 palenques in Panama, one in Portabello, one near Panama City in the mountains, and one in the region south of Panama City.

How many Cimarrons were there in the Americas?

Records of the time indicate that successful escape from enslavement was common. For example in 1571, a Spanish Bishop claimed that just under a third of Africans who arrived in Panama each year escaped. By 1573, it was estimated that there were around 3000 Cimarrons in the region.

Cimarron communities were confident and strong enough to organise regular attacks on the Spanish. These raids aimed to liberate other enslaved Africans, as well as to seize supplies and treasure. Counter attacks would typically be launched against any Spanish who came looking for them after attacks on towns and settlements.

Negotiation and Alliance with the Cimarrons

There is some evidence in the account that Diego had previously betrayed the Cimarrons, and that this might initially have been a barrier to negotiating an alliance with Drake. There is a possibility that Diego had tried to escape from his Spanish enslaver before, but had been recaptured and forced to betray the Cimarron community.

Diego’s suggestion that he introduce Drake to the Cimarrons was not immediately followed up, and the English returned to Port Plenty, where Diego used his knowledge of local building methods to help build lodgings and a meeting house. However the prospect of an alliance against the Spanish between Drake and the Cimarrons with their local knowledge remained compelling and Drake returned to the plan in the following year.

In this period, it’s likely that Diego would have become increasingly confident in using English, enhancing his skills as an interpreter.

Despite his fears about whether the Cimarrons would trust him, Diego successfully co-ordinated and negotiated an alliance. Negotiation took place with the Cimarron leader Pedro. Following discussions, two Englishmen were left with the Cimarrons as security, and two Cimarrons returned with the English.

The Cimarrons themselves also clearly saw the advantages of a joint alliance with the English against their common adversary.

The First Raid for Spanish Silver

According to the account in ‘Sir Francis Drake Revived’, Drake asked the Cimarrons how they could help him to gain gold and silver. The Cimarrons told him they had previously taken gold and silver from the Spanish, but had buried it in river beds for security. This was inaccessible due to high waters in the rivers.

The Cimarrons suggested that the best way to get Spanish silver would be to intercept the procession of mules which carried the silver from Panama City to Nombre de Dios.

To plan this effectively would require waiting till the Spring and meeting with another group of Cimarrons from the mountains. The Cimarrons helped Drake and the English set up a new camp, building two lodging houses and a fortress named Fort Diego.

At the end of January 1573, Cimarron messengers reported that the Spanish fleet had arrived at Nombre de Dios ready to pick up the silver from the mule convoy.

Pedro, the Cimarron leader advised Drake on suitable weapons, food and clothing for his men as they planned their attack. In particular, they should bring extra shoes, as they would be worn down by the stony gravel in the rivers.

The joint Cimarron and English force set off to attack the Spanish silver treasure mule convoy on February 3rd. A group of thirty Cimarrons and eighteen English men travelled for two weeks towards Panama City and the Pacific side of the country.

On the journey, Pedro took Drake to a high viewpoint of both Oceans.

“..from thence we might, without any difficulty, plainly see the Atlantic Ocean whence now we came, and the South Atlantic [the Pacific Ocean] so much desired. After our Captain had ascended to this bower, with the chief Cimaroon, and …had seen that sea, of which he had heard such golden reports: he besought Almighty God of His goodness, to give him life and leave to sail once in an English ship, in that sea! “

This was the first time an Englishman had seen the Pacific ocean, and Diego and Drake would sail on that sea together in years to come.

The Cimarrons provided advance warning of the departure of the Mule convoy and the men were ready when it approached. However one of the Englishmen was drunk and jumped up too soon and was discovered. The treasure convoy turned back and only two mule packs of silver were captured.

The men escaped, but had no option but to return to Fort Diego to plan a further attempt.

The Second Raid for Spanish Silver

A second attempt was planned for the end of April. This time the attack was planned nearer to Nombre De Dios in an alliance with French privateers known as corsairs. The leader of the French corsairs was Guillaume le Testu, an experienced navigator and creator of maps.

To give an impression of the wealth involved, the Spanish mule convoy was guarded by 45 soldiers. It consisted of 190 mules in total, each of which carried 300 lbs of silver.

In the second attack, one Cimarron was killed and the French corsair leader Guillaume le Testu wounded. He was later captured and killed, but the Spanish fled leaving the treasure. Drake, the Cimarrons and the French took as much as they could carry, burying the rest. In all, it is thought that they recovered 150,000 pesos in gold and silver.

Accounts report that Drake and the Cimarrons parted on good terms, Drake providing rewards and gifts for Cimarrons including a choice from the treasure.

After the raid, Diego returned to Plymouth with Drake, and four years later set off with him on a voyage around the world.

It’s clear that Diego’s role as a go-between together with the Cimarron local knowledge was critical to Drake’s success in Panama. The Cimarrons provided military assistance, acted as guides, carried supplies, captured food, and set up camps.

The Cimarron alliance was celebrated by Drake, and he planned further joint ventures, right up until his final voyage in 1596. However as English visits to Panama were relatively infrequent, they could not be depended upon by the Cimarrons and over the years there was closer alignment of the Cimarrons with the Spanish.

Despite this, other Englishmen continued to include the Cimarrons in their plans to best the Spanish well into the 17th century.