It’s likely that Edward Swarthye came to England with Sir Edward Wynter on the return of Drake’s voyage to the Caribbean in 1786, becoming a Porter in the Wynter household. His Christian name indicates that, like Dederi Jaquoah, he was baptised after his employer Edward Wynter, who likely also stood as his godfather. 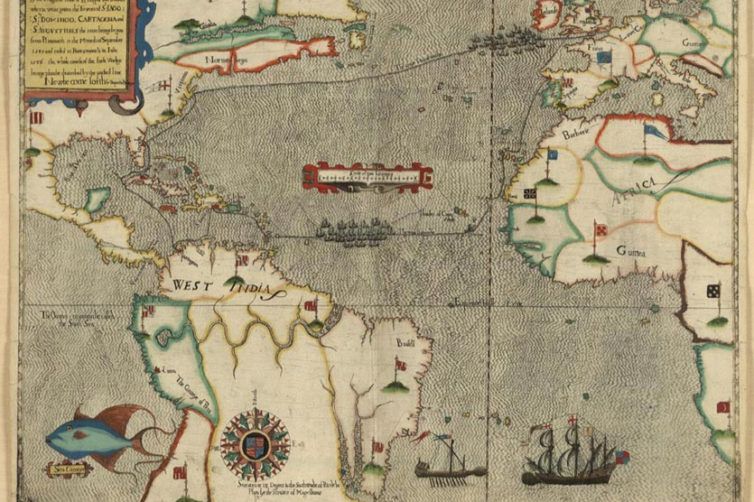 It’s likely that Edward Swarthye came to England with Sir Edward Wynter on the return of Drake’s voyage to the Caribbean in 1786, becoming a Porter in the Wynter household.

His Christian name indicates that, like Dederi Jaquoah, he was baptised after his employer Edward Wynter, who likely also stood as his godfather.

Who was Sir Edward Wynter, and what was the background of his family and the household where Edward Swarthye worked as a porter?

Sir Edward Wynter was a landowner, member of parliament and sea captain. He’d studied at Oxford during the period when Richard Hakluyt the geographer who compiled the book Principal Navigations, Voyages and Discoveries began giving public lectures.

He came from a family of Bristol merchants and sea captains. His father William Wynter and his grandfather John Wynter had both been treasurers of the navy, and his cousin John had captained the Elizabeth on Drake’s circumnavigation voyage. Both Edward and his father had fought against the Spanish Armada in 1588.

In 1585, aged 25, the young Edward Wynter had joined Drake on another Caribbean raid. He had command of the ship the Aid. 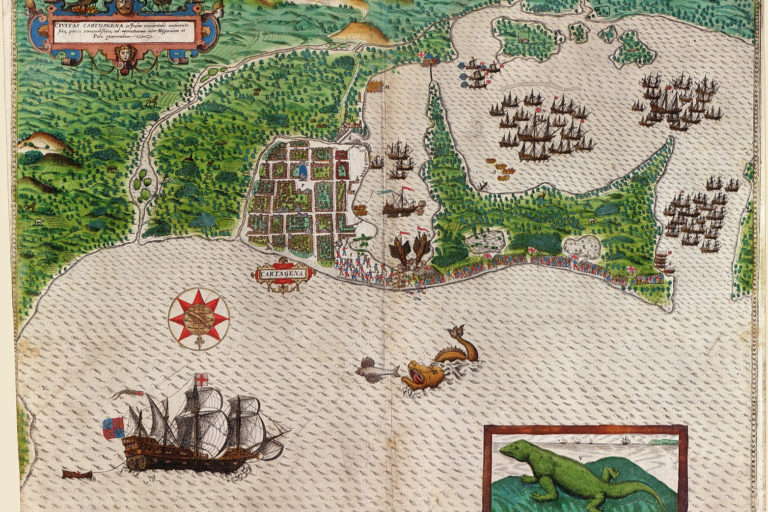 On the voyage, which raided several Spanish ports in Spain, the Atlantic islands, the Caribbean and Florida, the ships picked up many Africans who, like Diego, had fled from the Spanish in the hope of greater freedom with the English. You can see the route of the voyage on the map above.

Edward Swarthye is most likely to have met Edward Wynter when he left the Aid and took an active role leading the men in the attack on Cartagena in February 1586.

Although a large number of Africans joined the English ships, many died when a huge storm hit the fleet near the fledgling English colony of Roanoke, in modern-day North Carolina. We only know of three African men who finally returned with Drake to England in 1586.

We’ve looked in detail at the story of Diego, and these accounts indicate that Africans continued to come to England as a result of the activities of privateers like Drake.

After his return from the voyage Wynter fought in France and was captured, ransomed and imprisoned. After paying his own ransom, by 1595 Edward Wynter was knighted, married, and had retired to Whitecross Manor and his estate in Gloucestershire.

Although we don’t know exactly when Edward Swarthye joined the Wynter household, it’s most likely that it was as a result of the voyage with Drake.

So what was the status of Edward Swarthye in his role at Whitecross Manor? What would his working life be like?

As a porter, Swarthye’s role would be to open the door to visitors at the gate or lodge of the manor house. This would likely involve turning away unwelcome visitors, as well as making arrangements for expected guests of Sir Edward Wynter.

Swarthey would be the first person that visitors to Whitecross Manor met and as such would contribute to visitors’ first impressions of the household. It’s possible that an African Porter might reflect Sir Edward Wynter’s desire to be seen as a well travelled gentleman.

A literary description of a Tudor Porter is given in the play Sir Thomas More which suggests ways in which the role could reflect the employer’s status.

‘You saw, my lord, his porter
Give entertainment to us at the gate
In Latin good phrase; what’s the master, then
When such good parts shine in his meanest men?’

In Shakespeare’s Macbeth, the porter is a world-weary fellow, who must continually answer the door to a variety of reprobates. He complains of incessant knocking . He is ‘never at quiet’ and exclaims “Who’s there, i’ the name of Beelzebub?”

A book of household regulations from the period indicates that the porter would typically sit beside the more senior household officers rather than with the more humble kitchen servants. This suggests Swarthye’s status as a porter was by no means the most lowly of the household, and that he would be seen as a trusted servant.

Research into other instances of Africans in noble English households, from over twenty known examples, suggest that Black servants worked in the same way as other servants in the household. They worked on practical tasks as working waged servants.

It was only later in the colonial period that enslaved Africans in the service of noble households became seen as exotic pets, as we see in later seventeenth and eighteenth century aristocratic portraits.

Edward Swarthye is discussed in this video talk for Gresham College presented by Dr. Miranda Kaufmann, as one of the Three Untold Stories.