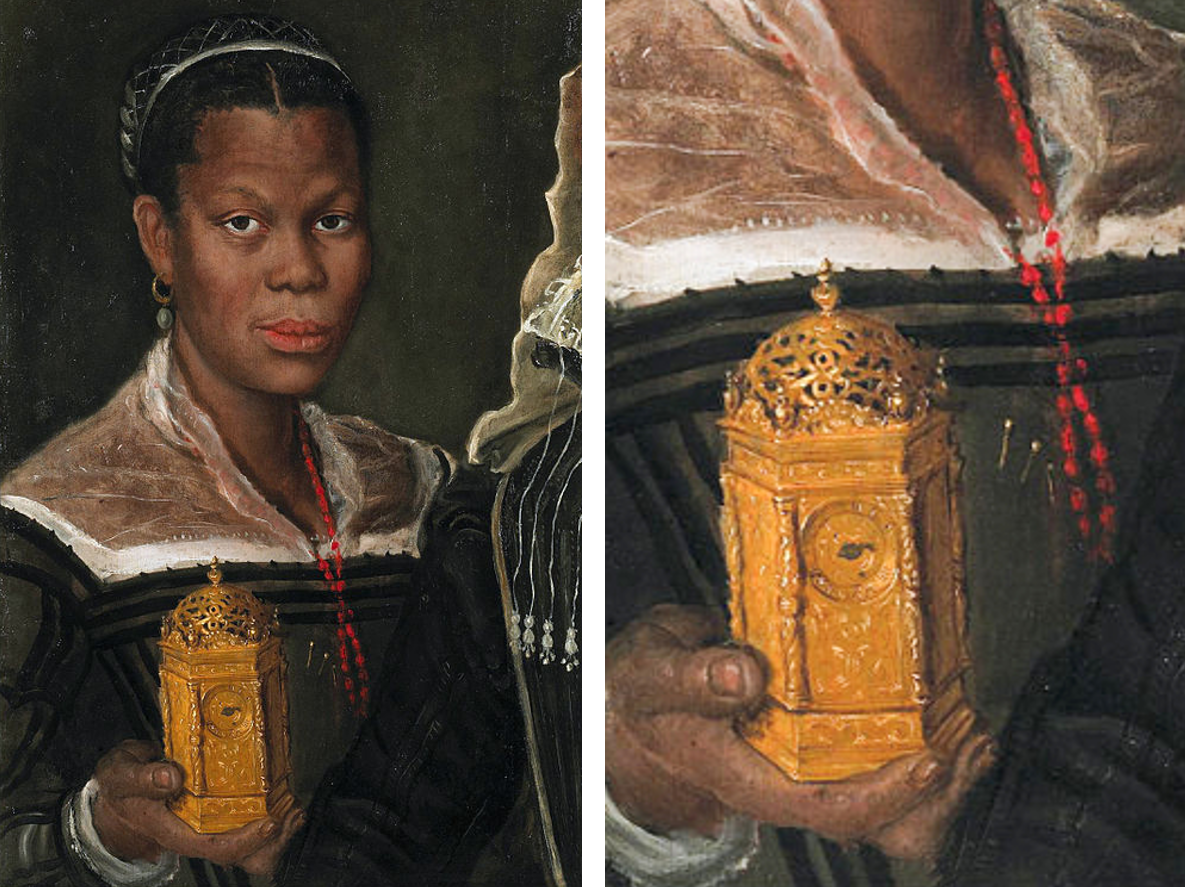 Although we have a remarkably detailed written ‘portrait’ of Mary Fillis in her baptism record, there are no visual portraits of Mary Fillis or of other Black Tudor women.

As we touched on with Michael Ohajuru in Week 2, there are however a number of surviving portraits of 16th century African European women, such as Dürer’s portrait of Katharina.

These European portraits can help to provide us with insights into the lives of Black women in England.

Another striking portrait of a Black woman, a near contemporary of Mary Fillis, is the ‘Portrait of an Unknown African Woman holding a Clock’ thought by some to have been painted by Annibale Carracci in Bologna, Italy in around 1583-85.

Alternatively, art historians from the Louvre Abu Dhabi suggest that her costume reflects fashionable styles at the Medici Court from the 1560s, which might place the portrait earlier in the century.

The Italian painting is a remaining fragment of a larger portrait with another sitter, possibly the mistress of the unknown Black woman. We can see the edge of an elaborate ruff collar to the right side of the image.

Details such as the pins attached to the black woman’s bodice suggest that, like Mary Fillis, she may be a seamstress, or a servant or attendant skilled in sewing. As she was living in Italy, she may have been enslaved.

The woman’s identity is not known, but some historians have speculated that she might be a housekeeper or even the wife of a clockmaker. Others have suggested that the clock and other details may be symbolic.

As we saw in Week 2, Art Historians have recently sought to uncover the often overlooked presence of Black men and women in Renaissance portraiture.

You can see the portrait in this wider context in the catalogue Revealing the African Presence in Renaissance Europe produced by the Walters Art Museum.

Take a close look at the Portrait of an Unknown African Woman by Italian artist Annibale Carracci.

There is no image of Mary Fillis, but what can we learn from other portraits of a similar period from Europe?

Share your responses to the portrait in the comments.